An incredible late interception try by Regan Grace sent St Helens to Wembley for the Betfred Challenge Cup final just when they appeared set to be undone by a fantastic second-half comeback by Hull FC.

Brett Hodgson’s side had fought their way back from 20-2 down to make the score 21-18 with five minutes to go when a Jake Connor 40/20 put Hull in scoring position.

But when they shipped the ball to the right, Grace risked the entire game by reaching for an interception around his laces and managed to hold on to the ball before racing 80 yards to score the clinching try for Saints, who went on to win 33-18.

Sainst, whose women had earlier won their first Challenge Cup trophy, now go to Wembley hoping to end a 13-year wait for a knockout success, with coach Kristian Woolf hoping to add to their Grand Final success in his first year in charge in 2020.

Hull had the better of the opening exchanges, regularly making significant yardage and making Saints return the ball from deep, and a Marc Sneyd penalty gave them an early 2-0 advantage.

But they were soon behind, as Grace finished off a short-side move by flying in at the corner beyond the weak tackle of Mahe Fonua, with Lachlan Coote converting and adding a penalty shortly after for an 8-2 lead.

Hull were then struck a cruel blow as Josh Griffin suffered an Achilles injury midway through a carry, and when he tossed the ball to the floor Theo Fages picked up for a walk-in. 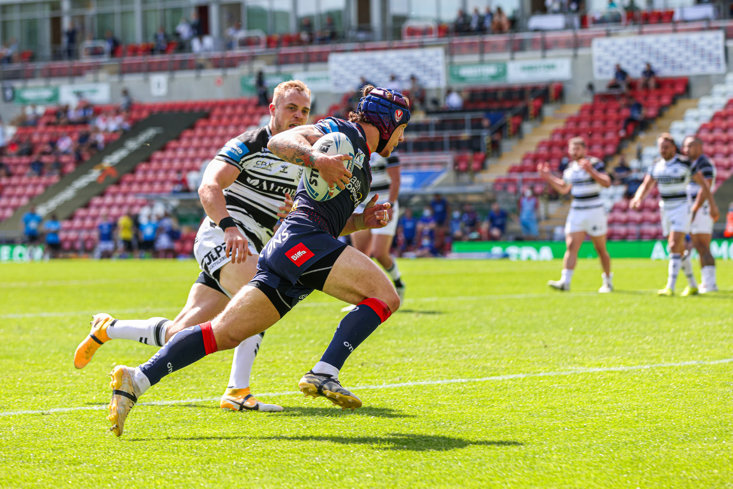 Saints’ Grand Final hero Jack Welsby then added the latest piece of magic to his young CV, managing to wriggle away from Carlos Tuimavave’s tackle and keep the ball alive to plant it down over the line, with Coote’s touchline conversion making it 20-2 and leaving Hull with a mountain to climb.

The Airlie Birds pulled one try back after a set restart, Fonua finishing off in the corner after they found an overlap on the right, but after Sneyd’s touchline kick reduced the arrears to 12, Fages then dropped a goal to put Saints three scores ahead once more at 21-8.

Danny Houghton crossed for Hull after great work from Tuimavave, and when Cameron Scott bundled his way over on the left, the Black and Whites had suddenly reduced the deficit to 21-18 and had all of the momentum.

But Grace’s incredible intervention put the result beyond doubt and Kevin Naiqama then tapped back a high bomb to allow Coote to stroll in and give the final score a more lopsided look than looked possible just moments earlier.

Saints will play the winners of Saturday’s second semi-final between Castleford Tigers and Warrington Wolves in the final at Wembley on 17 July.