Rugby League
News
The Salford man is looking ahead to the World Cup later this year
George Riley
19:00, 31 Mar 2022

Kallum Watkins has experienced some extraordinary peaks and troughs during a trophy-rich rugby league career and now tells The Sportsman how the Covid pandemic probably stopped him quitting the game altogether.

The 31-year-old England centre suffered a crushing blow last summer when scans revealed he had torn his ACL again playing for Salford, the third time in his career he had suffered this most serious of knee injuries. Nine months on and Watkins is ready to return to the blood and thunder cauldron of Super League, and expects to be back in the heat of battle by the end of April.

Yet he almost packed it in last year.

The shock that what Watkins had expected to be a minor knee problem was in fact something altogether more serious, the knowledge that months of gruelling rehabilitation lay in front of him for a third time in his career, and the crushing realisation that he would miss the World Cup, ending hopes of ever playing in the international game’s showpiece event again. It was too much.

“When it happened and I knew it was my ACL it was a bad feeling,” he told me.

“I did contemplate quitting, not playing anymore. I had a really big worry about that because these injuries are big, they are tough to come back from and I’m not getting any younger.

“I’ve been a professional a long time so there is a lot of wear and tear. Thinking I was done, that was an instant reaction. When you get that kind of injury, and the amount of injuries I’ve had, you get that little inkling towards it (quitting).”

Watkins experienced first-hand during a glittering career at Leeds just what builds resilience and how to go about managing adversity. Those experiences, along with the memories of his two previous stints of rehab gave him the mental platform to persevere. “I think I’ve dealt with this injury really well. The last couple of times I’ve been too preoccupied with when I was going to get back playing,” he admits.

But crucially it was the shifting back of the World Cup from last autumn until later this year that provided the kick he needed to give it one last go.

“The postponement of the World Cup has given me a huge focus,” he admits.

“I thought my last chance had gone. When they postponed it that picked me up a bit more and made me just want to hit my goals, do everything right in looking after my knee and giving myself a chance.”

Watkins was an ankle-tap away from giving his country a shot at winning the World Cup Final in 2017. His time since that iconic play by Josh Dugan has been tough. 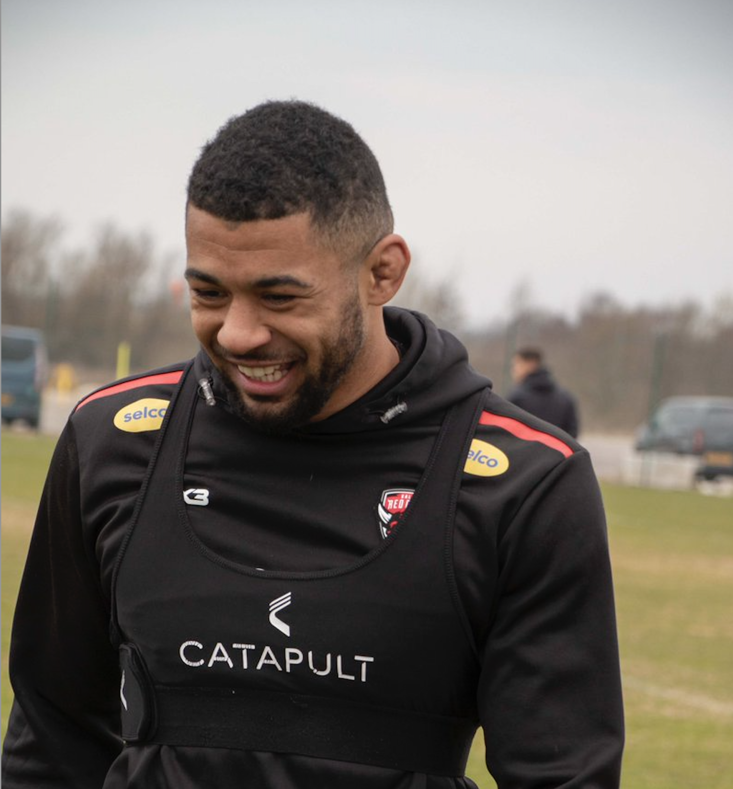 Kallum Watkins happy to be back on the training pitch

Watkins went into that World Cup off the back of a sixth Grand Final win with Leeds.

But the all-conquering Rhinos side disbanded, and struggled badly. Appointed captain, Watkins felt the pressure to lead their survival bid, until another ACL injury ended his season. He was then sold to Gold Coast Titans in the NRL but played just eight times before returning to the UK for family reasons. His next move to Toronto ended before it started when the ambitious Canadian franchise financially imploded, heaping enormous financial strain and uncertainty on everyone involved in the doomed project.

So Salford provided the chance to resurrect a stunning career that had stalled badly.

”It’s another challenge to get back and perhaps prove even myself wrong. I now feel there are always people worse off than I am so I want to be grateful for the opportunities that I get, especially at Salford who have worked me really hard and really looked after me.”

Yet these difficult transitional years have been negotiated against the backdrop of deep personal struggles.

Watkins separated from his wife two-and-a-half years ago. He has also openly detailed his experiences of depression with suicidal ideation.

As this writer knows himself, it is a dark, lonely and cripplingly painful place to be. Yet hitting rock bottom can prompt change, and a desire to use a traumatic experience to educate and help both yourself and others.

Indeed while chatting for this article, we were approached by a gentleman who interrupted to say thank you to Kallum, thank you for everything.

When he walked away I asked who it was. It was somebody who Watkins had seen struggling with his mental health on social media, and reached out to, with the empathy and compassion of a man who has been trapped at the bottom of that hole himself. It is something that has given him a strong perspective to navigate life’s continued challenges.

“Mentally I’m in a good place now,” he says.

“There are times when you feel low but that is something I’ve always had to accept and I think ultimately having that acceptance has helped me progress and be more positive.

“That is especially true with this injury, because ultimately it was only at the start that I got down about it, and now I just set small challenges and hit them.”

With recent memories always appearing strongest in our psyche, it would be easy to forget what a sensational rugby league player Kallum Watkins has been.

At his peak for both Leeds and England, he was unstoppable.

If there is any chance of Watkins rediscovering that form then he has every chance of a stunning return to coach Shaun Wane’s international squad for what the nation hopes will be a first ever World Cup win later this year.

“I’ve not had any recent dialogue with Shaun but when I did get injured last year he was very much in touch,” he reveals.

“He’s got a big year ahead and needs to make sure he is getting the right people in. I’ve been out for a while so it gives opportunities to other players to get themselves in ahead of me.

“I just want to get back playing, being happy, and gaining confidence from being back on the field and the rest takes care of itself.

“If I perform well then hopefully they will pick me but that is a long-term goal, for now it is just about getting back playing and enjoying being out there again.”