Football
News
The 5ft 4in attacker is the Azzurri's main creative force in the final third
Kris Voakes
08:48, 16 Jun 2021

Daniele De Rossi knew it was Lorenzo Insigne who could make the difference.

When the Roma captain was instructed to get ready to come on with Italy needing a goal against Sweden to qualify for the 2018 World Cup, he demanded to be told why it would be him entering the fray and not Insigne, the kind of sublime attacking talent who might have been able to curate the key moment for the Azzurri.

He was right, of course. While Gian Piero Ventura didn’t put De Rossi on the field in the end, Insigne didn’t get called upon either as Italy failed to reach the World Cup for the first time since 1958.

Almost four years on from that now iconic exchange on the bench at San Siro, Insigne finally got to star for the national team with the eyes of the world watching on last Friday. His performance in Italy’s 3-0 win over Turkey in the opening game of Euro 2020 helped to underline the reasoning behind a late run of support for the Azzurri to win the whole thing.

His dynamic approach in the final third was one of the highlights of a convincing display from Roberto Mancini’s men, and when Italy host Switzerland at the Olimpico on Wednesday night he is again likely to be the key man in the final third.

At Napoli, Insigne has become the modern-day icon for a club which is known for idolising its heroes. Post-Diego Maradona there have been a host of footballing deities, from Ezequiel Lavezzi to Marek Hamsik via Edinson Cavani. At one time or another in the past 15 years, there have been a number of stars who have been almost as highly regarded as ‘El Diego’ in the rough and ready city of Naples. 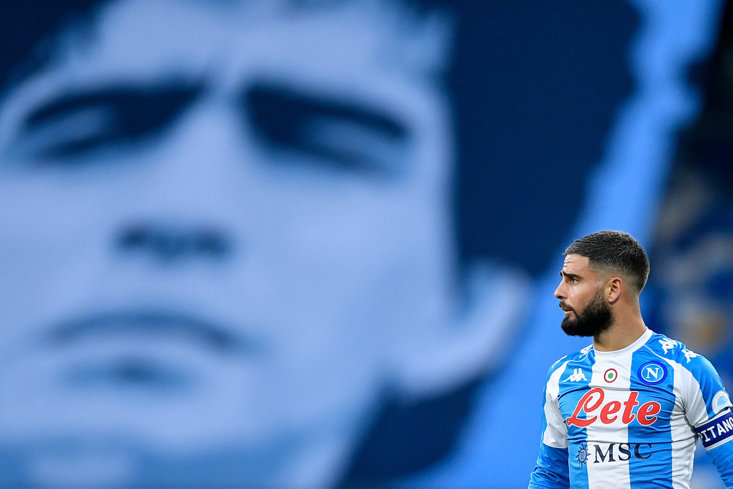 Yet it is Insigne who has come to be the idol of Campania in recent years, not only taking the captain’s armband from Hamsik after the Slovakian’s departure in early 2019 but also becoming the bedrock of the Napoli attack. In the last nine years since returning from a loan at Pescara, Insigne has missed more than three Serie A appearances in a season only twice, and his 19 goals in the Italian top flight in 2020-21 was his best return to date. He's even had to laugh off talk that the Partenopei should take Maradona's No.10 shirt out of retirement for Insigne.

His lack of physical stature is notable to say the least, but he has not been one to let his 5ft 4in frame hold him back. “I used to get told I had the talent but that I was too short,” Insigne once revealed. “At one stage, I wanted to quit football as all the scouts told me the same thing.” But his dribbling ability, tenacity and eye for the spectacular don’t need to be packaged in a 6ft-tall body in order to be match-winning, and his belief in himself drove him on to eventually become a superstar for club and country.

Italy teams are so often anchored around a pace-setting No.10, and that has never been more the case than now. Alessandro Del Piero, Francesco Totti, Roberto Baggio, Gianni Rivera… the list of stars to act as fantasista in a thriving Azzurri side is long and illustrious. And Insigne is proving himself to be worthy of mention among those game-changers who have come before him.

Having overcome the ‘too short talk’ and shrugged off Ventura’s fatal faux pas four years ago, Lorenzo Insigne is proving himself to be exactly the sort of superstar Roberto Mancini’s Italy can rest its hopes on.