When Leeds Rhinos would dominate opponents, propelled by a thunderous South Stand on the kind of intimidating night that rival teams feared and relished in equal measure.

That kind of night has felt a thing of the past for Leeds fans increasingly accustomed to the struggle. Yet grateful for the stunning memories shared with those iconic teams of the Kevin Sinfield era.

“The crowd fed off the players and then it was reciprocal and it was good to be part of, having that 14th man on the field,” Leeds boss Rohan Smith told The Sportsman after watching his side stun Betfred Challenge Cup winners Wigan Warriors 42-12 to give their own disjointed season fresh hope.

The last time Leeds beat Wigan at Headingley, Danny McGuire and Rob Burrow were still playing. The two clubs’ directions of travel since the legendary half-back pairing signed off in 2017 could not have been more different.

This was a huge statement of intent from a Rhinos side being reborn under an energetic young coach.

“It was a good, hard game of footy“ said Smith, who inherited a Rhinos side devoid of belief, intensity and quality when he took over in May. Three things that were overflowing on Thursday night.

“Strategic interchanges kept our energy strong through our middle. The opening shift was outstanding.”

The intensity, noise and speed of Leeds left a very good Wigan side shell-shocked. Their boss Matt Peet felt his side were out-worked and beaten to the punch in every aspect of the game. “They got what they deserved,” he said, impressed by how “connected” the Rhinos now look.

Smith has only been in the job a couple of months and will still be learning. So The Sportsman asked the Leeds boss what he learned from this stunning dismantling of one of the Grand Final favourites.

“It’s a really hard question,” Smith replied after a lengthy pause. He is one of those coaches who listens attentively to each question and attempts to answer with honesty rather than throwing back cliché or sound bite.

“It probably confirmed my belief. I talk a lot to players about ‘learn or confirm’. I know there’s a belief in there, and I already knew that. There are a lot of good players in there and we have played a bunch of good rugby over the last period of time. I’m stumped on the learn part. But it confirmed a lot of belief. 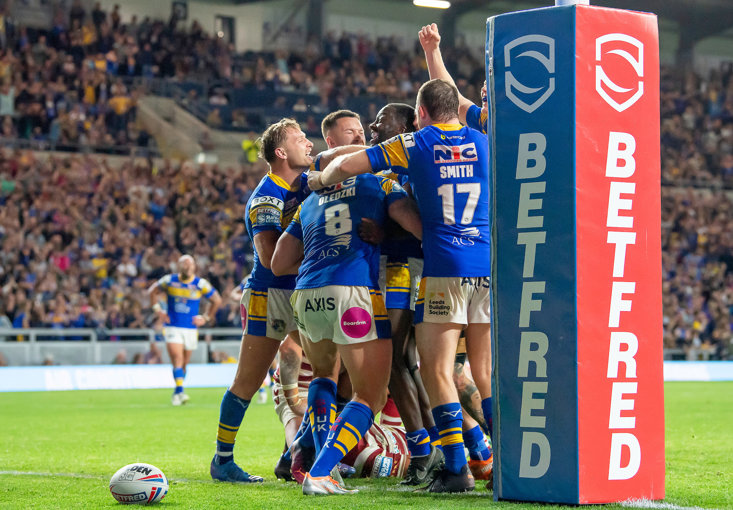 “I said to the players at half time that we had had a good half of footy and that I was not surprised. Being able to replicate that on a regular basis is the opportunity that we have in front of us.”

Remarkably, this was a first home game for Leeds in nine weeks, which Smith believes has worked massively in his favour. It has allowed him time and space to get to grips with his new job and for he and the players to gel, away from the often unforgiving home environment which can add weight to the burden of a struggling side.

“Having not been here for so long there has been a lot of transition and a lot of growth within our team and a lot of changes, ups and downs.

“Perhaps people were coming not quite sure what they were going to see. But as soon as they saw the energy of the team and the intent, then they fed off it.

Under Smith Leeds have ceased their relegation flirtation and are instead genuine playoff contenders, a point now off the top six after a performance that would have caused problems for any of Super League’s top sides.

“I’m not aware of how the table looks, that's for you guys in the media. I just love working with players who want to get better, play for the team, the club, young, old or anything in between.”

There remains an air of unpredictable chaos around Leeds. They are - as Smith is at pains to point out - a work in progress, and may well get thumped next week in the unforgiving Catalan heat. It is worth remembering that only last weekend Leeds wer losing in Toulouse.

But the hunger and direction that evaporated under former boss Richard Agar is suddenly visible again. And that is what is winning the fans back.

“It’s been a good journey’” adds Smith. “But we are just getting started.”