Football
News
Newcastle were beaten 4-0 by Leicester to leave them stuck in the bottom three
Conor Keane
16:04, 12 Dec 2021

Newcastle United’s Premier League survival mission just got harder as they were comfortably beaten by out-of-form Leicester City 4-0 at the King Power Stadium.

It has been known all season that the Magpies are extremely vulnerable when it comes to defending and today’s defeat was just another example of a game that they could have taken points, but defensive errors cost them – even if the challenge on James Maddison to earn a penalty was soft.

We saw the other week the lack of discipline and composure among the defenders as Ciaran Clark received a red card in the draw with Norwich City inside the opening 10 minutes. Jamaal Lascelles’ challenge on Maddison was unfortunate, but when you lunge in in dangerous areas, you always put yourself at risk and collective mistakes continue to hamper Eddie Howe’s work to turn the club around. The manager has already made subtle improvements to the backline but when his players make reckless decisions and costly errors, there is not much more he can do.

With the gargantuan increase of financing Newcastle will have received following their takeover, Howe will be hoping for enough to spend to help tighten up his frail defence, and at least give them a chance of beating the drop. The 44-year-old will have surely already drawn up a list of targets for the upcoming January transfer window and it would not be at all surprising to see quite a few defenders walk through the door. But that is not the only area for concern for the Magpies. Even when they do have possession there are too many occasions where they do not look threatening enough.

The midfield looks unbalanced and Howe needs to improve the transitional play from the middle of the park to the attack. Callum Wilson is a proven goalscorer at this level but is yet a wasted man on the pitch because he is not being found. Having worked with the striker for years at Bournemouth, Howe knows how having the right players around the 29-year-old will benefit the Magpies. But as of right now, they do not look strong enough to pull themselves away from danger, especially when their next three fixtures are Liverpool (A), Manchester City (H) and Manchester United (A). They are currently three points adrift from safety and the gap is likely to increase over the festive period.

For the game itself, it was a nightmare start for the hosts as stalwart defender Johnny Evans was forced off within five minutes with an injury. This added to the lack of confidence amongst the Foxes defenders who had some shaky moments in the early stages. In a half that lacked quality in the final third, there was a goal. Leicester were awarded a penalty as man of the match Maddison was softly brought down by Lascelles and Youri Tielemans stepped up and fired in from the spot which was a huge relief of pressure for the Foxes. 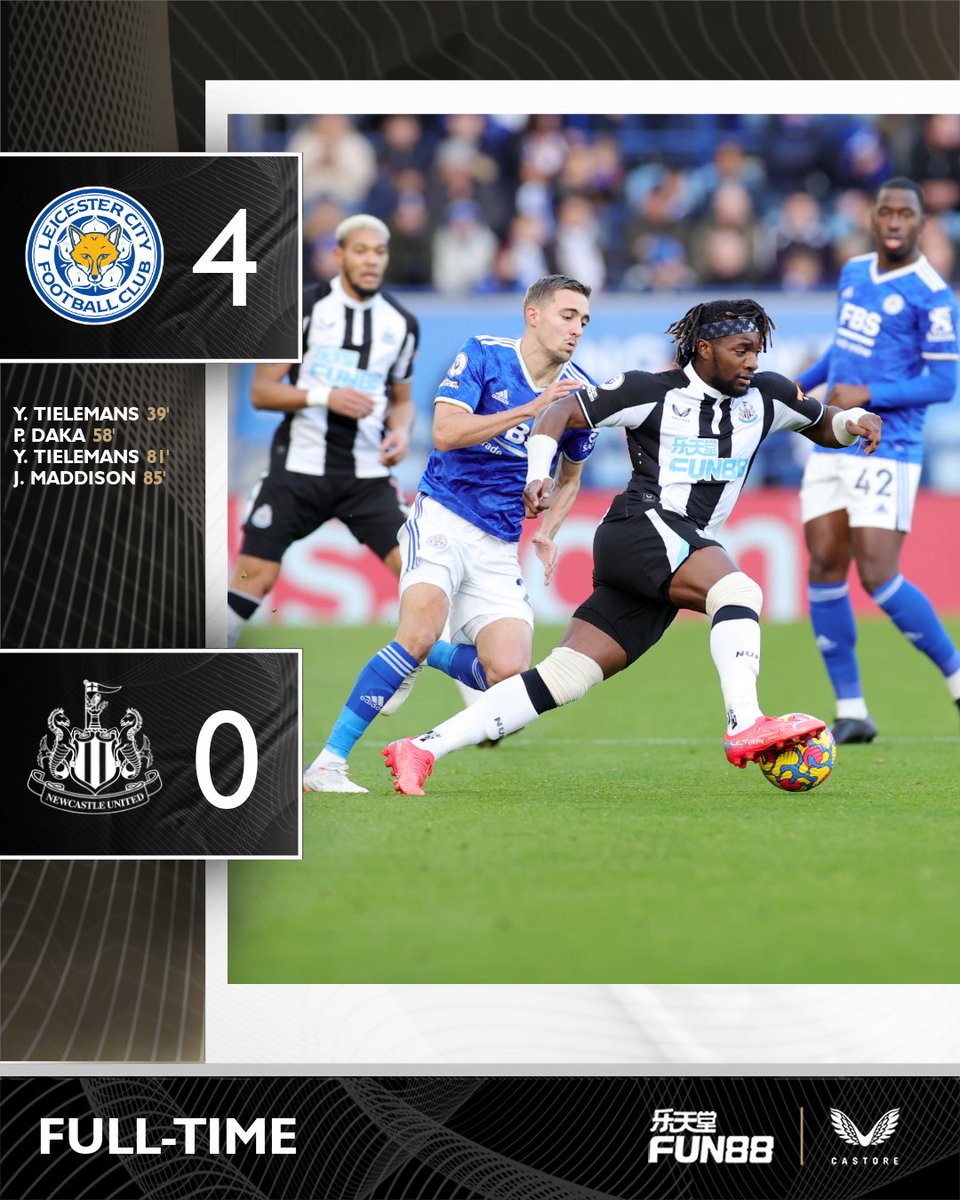 Brendan Rodgers’ side then started to impose themselves on the game in the second half and they fired in a second just before the hour mark. Maddison played a brilliant pass over the top through to Harvey Barnes who beat the offside trap and he played a simple across to Patson Daka who slotted into an empty net. Even without main man Jamie Vardy, who was left on the bench, Leicester had more than enough to dismantle the Magpies with relative ease in the second period.

It was troubling for Newcastle as after a bright spell after going behind toward the end of the first half, they failed to build on it and allowed Leicester to grow in confidence and snatch the second, easing the heavy pressure that their Europa League exit brought upon them. Newcastle pushed to find a way back into the game, but they could not penetrate the Foxes’ defence. Each time they committed bodies forward they left themselves exposed at the back and Leicester added two more goals in the latter stages with Tielemans grabbing a second, before Maddison got in on the action to the delight of Brendan Rodgers – who really needed a response from midweek.

Maddison has come into this side and now looks back to his best, with two assists and a goal in an influential performance, while Daka now looks like a credible alternative to Vardy, and a potential hint to the future as the 34-year-old reaches the twilight of an incredible career. But for Newcastle the problems keep on mounting and they will need improvements in January, otherwise there will be no escape from the relegation zone. Elsewhere, Burnley held West Ham United to a 0-0 stalemate at Turf Moor as they move one point ahead of Newcastle with a game in hand.