Danny Cipriani produced a touch of class to help inspire England to a badly-needed victory as they ended a disappointing Test series in South Africa on a high.

Eddie Jones’ men had lost the first two encounters against the Springboks to set a five-match losing streak in Test matches this year.

That alarming run had raised serious questions over Jones’ reign ahead of next year’s World Cup in Japan.

Ill discipline, poor defending and dire game-management had characterised England’s two previous performances against South Africa in the past fortnight.

But this was a victory for spirit and sheer bloody-mindedness as Jones’ men saw out the game in awful rain-soaked conditions in Cape Town to give their head coach some much-needed respite.

Red Rose captain Owen Farrell’s educated boot saw him land 20 points with the boot but Cipriani took centre stage in the 72nd minute when his brilliant crossfield kick was touched down by Jonny May.

Leicester wing May has been England’s player of the series but Cipriani's sumptuous assist was a welcome reminder of his rare talent on his first England start at fly-half for 10 years.

This was only England’s fourth-ever win in South Africa and was such an important success for Jones as he bids to lead England to Japan next autumn. 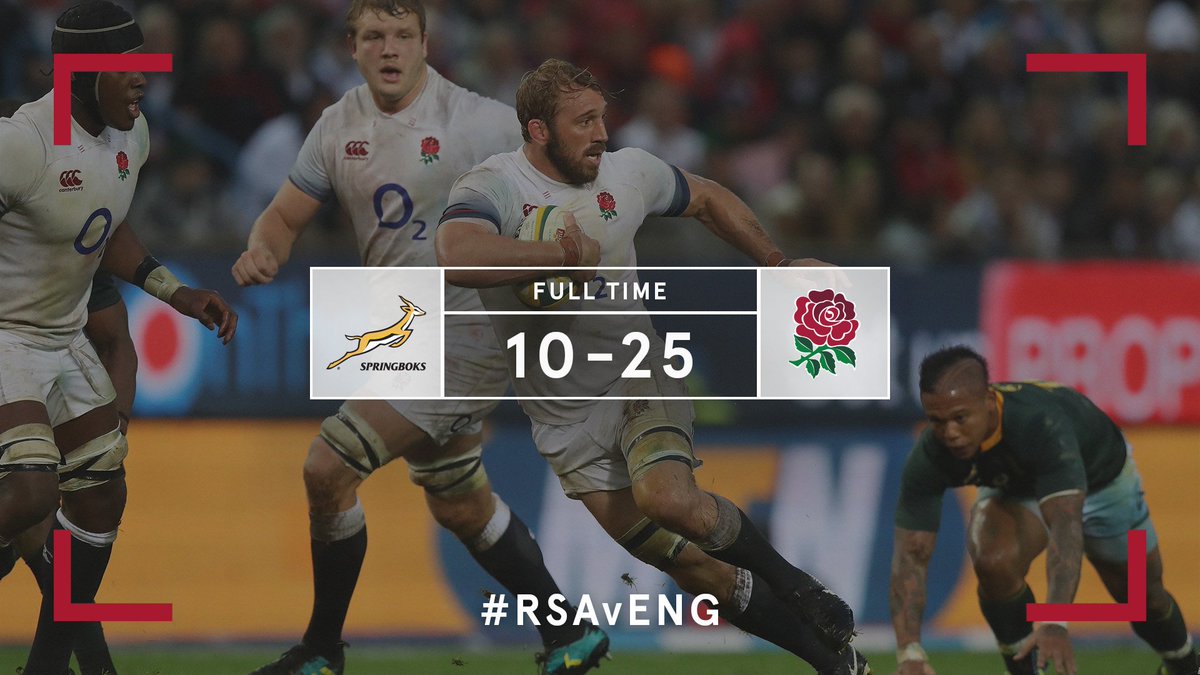 Harlequins back-rower Chris Robshaw returned to the England side at Newlands just a week after being dropped by Jones for the first time.

Robshaw made way for Brad Shields at blindside-flanker for the second Test in Bloemfontein but the converted Kiwi was stricken with food poisoning.

But the biggest news, of course, was the inclusion of Cipriani at fly-half after he replaced George Ford.

The previous time Cipriani pulled on the number 10 shirt at international level it ended with his side suffering a record 42-6 defeat at Twickenham by then-world champions South Africa in November 2008.

It has been a chequered journey for the 30-year-old over the past decade, making headlines for the wrong reasons and suffering injuries at inopportune moments.

But, for the first time since November 2008, the Gloucester man was finally back in the fold and how he took his chance.

In stark contrast to the breakneck openings to the first two Tests, this was a match where genuine tryscoring opportunities were at a premium.

A drab, tightly-contested first half saw Elton Jantjies kick a penalty for South Africa but two from Farrell saw England take a 6-3 lead into the break.

Shortly after the restart, Farrell added a third penalty but in the 46th minute the Springboks forged ahead when Warrick Gelant's cleverly-weighted kick was touched down by the onrushing centre Jesse Kriel.

Jantjies added the extras to make it 10-9 to the hosts but Farrell added two more penalties before the hour mark.

England managed the game well and, with eight minutes remaining, Cipriani's delightful kick to the right corner was grounded by the predatory May, whose try saw him score in all three Test matches against the Springboks.

For England, the emotions were relief and delight as they look forward with renewed optimism to the autumn internationals – and another meeting with South Africa at Twickenham.