It was a signing which caught the imagination of a whole city. In the spring of 1995, Middlesbrough Football Club were playing second-tier football in their run-down old Ayresome Park home. But just a few months on and now a Premier League club with a brand spanking new stadium, Boro had managed to attract one of the most highly-rated young players in world football to the Riverside.

Juninho’s was the name on everybody’s lips.

From the moment that the club announced his £4.75 million signing from Sao Paulo, the whole of Middlesbrough fell in love with the 5’5” Brazilian. He’d been the Footballer of the Year in his homeland the year before, which meant a lot given they were the world champions and still the biggest name in international football at the time.

But more than that, he had just become a symbol of what Boro could now hope to achieve.  In a league which had not yet had a massive influx of foreign superstars and current internationals, chairman Steve Gibson had pulled off a masterstroke.

Far from being a destination for steelworkers and ship builders, Middlesbrough might now be a new home for some of the globe’s most exciting footballers. When Boro fans, and even non-football-loving locals saw Juninho wearing a Middlesbrough shirt with pen to paper and manager Bryan Robson smiling happily alongside him, it was the start of something new.

Even before he arrived on Teesside, Juninho had the fans in a stir. Their first game after the announcement was a trip to Sheffield Wednesday live on Sky TV, and the match itself became a side-bar event despite the fact the Brazilian hadn’t even arrived in the country yet. Boro fans dressed in Brazil’s famous canarinha colours were seen banging drums, blowing whistles and dancing to the samba beat through the streets of Hillsborough long before kick-off. Nigel Pearson, Neil Cox and Jamie Pollock would be among the stars of their team that day, but that was of no importance… Juninho was the big attraction all the same.

It took another couple of weeks before The Little Fella, as he would come to be known by fans, finally made his long-awaited debut against Leeds United on 4 November 1995. He was worth the wait. Within 11 minutes he had already made a huge impact.

Picking the ball up on the left around halfway from a pass by Pearson, Juninho drove forward, took on Gary McAllister and then played a perfectly-angled ball in behind Richard Jobson for Jan-Age Fjortoft to collect and loft over the onrushing John Lukic. The number 25 had made his mark in stunning style.

Boro went on to finish in a comfortable enough mid-table spot, but Juninho scored just twice in that 1995-96 season as the club slowly went about building a side around him. It was only after they had secured their Premier League status for another year that they went out and made further eye-catching signings.

The arrivals of the likes of Fabrizio Ravanelli, Emerson, Branco and Gianluca Festa made Boro one of the must-watch sides of 1996-97, with 111 goals scored in total across all competitions in Middlesbrough games. ‘The White Feather’ memorably netted a hat-trick on his debut against Liverpool on the season’s opening day as part of a 31-goal haul, but Juninho was the man around whom everything else ticked. The Brazilian netted 15 goals in a never-to-be-forgotten campaign which saw Boro reach two cup finals as they proved to be a side who could beat just about anyone on their day. 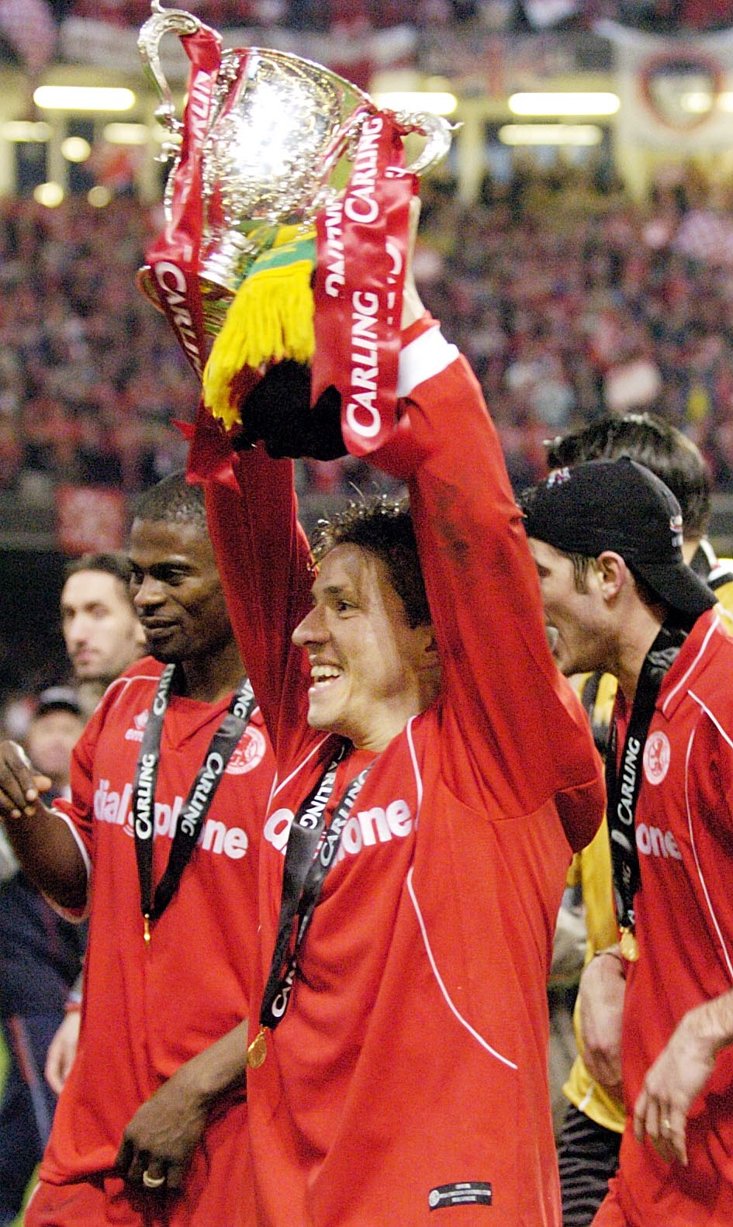 JUNINHO WON THE LEAGUE CUP WITH BORO IN 2004

Most memorably of all though, they would not only lose both the League Cup and FA Cup finals but also lost their Premier League status when a 1-1 draw at Leeds on the final day sent them down by two points, just a few months on from having had three points docked by the FA for failing to send a team to the fixture at Blackburn Rovers in December. Robson had withdrawn his side from the match at Ewood Park citing an injury and illness crisis which had left him unable to cobble together a team, but the FA were having none of it.

With Boro back in Division One and a World Cup place to be fought for, Juninho moved on to Atletico Madrid for around £13m.

“I think I should have been more mature and decided to stay in England in 1997,” he told FourFourTwo some years later. “I have nothing against Atletico Madrid. The opposite, I was really happy in Spain and really wanted to play there but maybe in a different moment.”

He would make a brief return to the Riverside in 1999-2000, spending a season on loan there after Boro’s return to the Premier League, but with an increasing number of clubs having by now snapped up top-level stars there wasn’t quite the same effect on or off the field.

Another spell at Boro from 2002 to 2004 saw him finally help the club to the first piece of silverware in their 128-year history with a 2-1 win over Bolton Wanderers in the 2004 League Cup final. By now a World Cup winner with Brazil, and surrounded by players such as Gaizka Mendieta, Boudewijn Zenden and George Boateng, Juninho was there to see Boro to success, capping off an era which his signing had started nine years previous.

He remains to most Middlesbrough fans the greatest player ever to grace the red shirt, and certainly the most exciting acquisition in the club’s history. One of the Premier League’s most ambitious signings of all time, Juninho had Boro dancing to the samba beat in a way nobody could ever have forseen.