Long before Jose Mourinho’s first assault on silverware at any new club came in the EFL Cup, the Football League’s prized knockout trophy was Cloughie’s cup.

Maybe Manchester City’s recent run of four straight successes or Liverpool’s similar streak in the early 1980s, even the Portuguese’s quartet of wins with Chelsea and Manchester United, helped to take away from what Nottingham Forest achieved under the great Brian Clough in the eyes of some. But in truth, it was the League Cup in which the great man kept on dazzling throughout his spell at the City Ground.

Clough’s brilliance was clear from the moment he led little Derby County to the league title in 1972, and while his brief dalliance with Brighton & Hove Albion proved less than successful and his attempts to reverse everything Don Revie had done at Leeds United resulted in an infamous sacking within 44 days, at Nottingham Forest he enjoyed his longest-lasting triumphs.

Having arrived in 1975, Clough got Forest promoted to the First Division in ‘77 and by the next spring had them five points clear at the top of the table with two games in hand on second-placed Everton. Throw in the fact these were the two-points-for-a-win days and they were heavy favourites for the title.

But it was at Old Trafford on March 22, 1978 that they won their first major silverware under Clough, a John Robertson penalty seeing off Liverpool in the League Cup final replay after a 0-0 draw at Wembley the previous Saturday.

Their subsequent title win, finishing seven clear of Liverpool, made the EFL triumph a quickly-forgotten achievement, but the following March they were back to retain the knockout trophy, beating Southampton 3-2 thanks in part to a Garry Birtles double. Just like the ’78 win, though, their Wembley victory was awarded footnote status when Forest went on to become champions of Europe with a 1-0 win over Malmo in Munich later that season.

It looked like they’d collect a third straight League Cup win 12 months later but Andy Gray’s only goal ensured that Wolves would take home the trophy from a tight encounter underneath the Twin Towers. And again, the successful defence of their European title limited the column inches dedicated to their latest Wembley appearance. 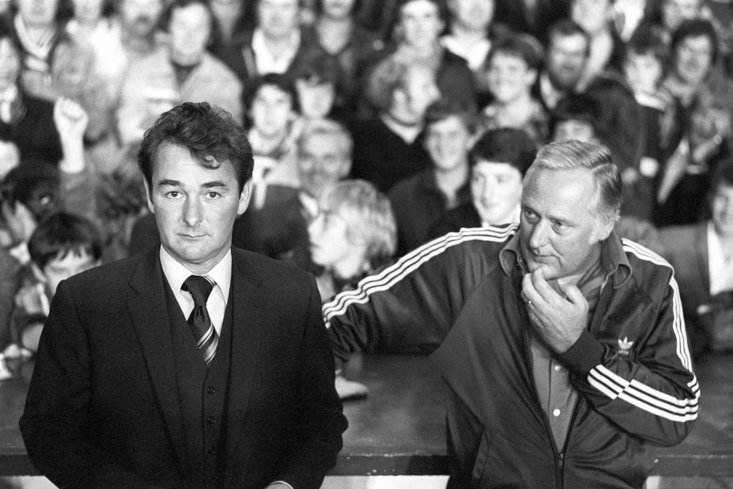 Those three visits to the final would not be Cloughie’s last great impact on the competition, even if Forest never regained their position at the very top of the English and European game. In 1989 they returned to the showpiece as they ended Luton Town’s push for back-to-back wins with a 3-1 success over the Hatters in the final, Brian’s son Nigel scoring twice to help his dad walk away with a third League Cup winner’s medal.

And 12 months on they retained the trophy once more, Nigel Jemson’s goal settling the contest against Oldham Athletic. Forest had a very different-looking side to the one which had used the League Cup as a jumping-off point a decade earlier. Where once there was Larry Lloyd and Trevor Francis there was now Steve Chettle and Gary Crosby, but Clough had still made another winning outfit out of them.

When they returned to Wembley for a sixth final under Old Big ‘Ed in 1992, the end was nigh. They lost that match 1-0 to Alex Ferguson’s resurgent Manchester United and a year later Clough would be gone.

He left behind a legacy, Forest’s sole title win and their two European Cups taking the headlines but his efforts in the EFL Cup first ensuring they got the taste for winning and later bringing a new generation of Tricky Trees some happy memories before he headed off into the sunset.

Steve Cooper has the chance to follow in Clough’s footsteps by taking Forest into the EFL Cup final over the next week. They’ve not been to a final of any description with a manager not called Brian Clough since 1959, and a rejuvenated United stand in their way.

Anyone who remembers the great man sat in the front row of the old Wembley dugout in his famous green jumper will be hoping they can get back there for Brian.