Boxing
News
Five comebacks from boxing past that can inspire Dillian Whyte against Alexander Povetkin this weekend
Kieran Spratt
10:00, 27 Mar 2021

On Saturday night, Dillian Whyte heads to Gibraltar in search of revenge against Alexander Povetkin in the “Rumble on the Rocks’ after suffering a shock knockout defeat to the Russian last year. 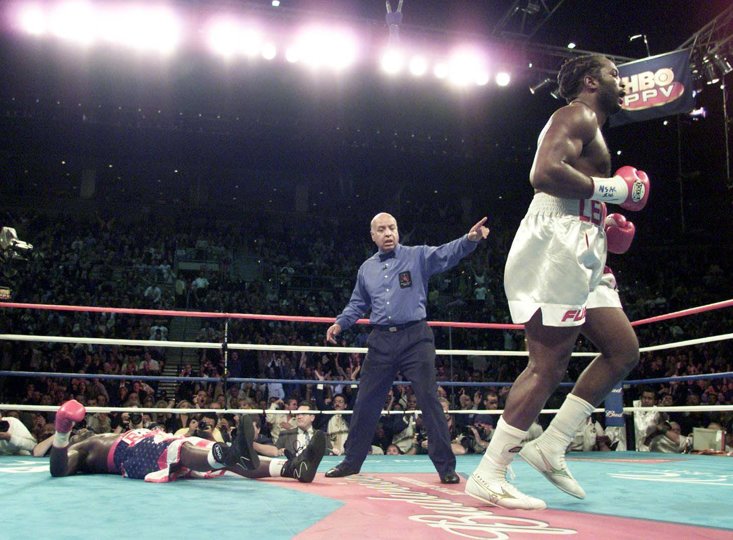 Lennox Lewis is one of the masters when it comes to bouncing back from defeat in style and proved that twice in his glittering career against Oliver McCall and Hasim Rahman.

First, Lennox lost his WBC title to McCall in a huge upset at Wembley Stadium in 1994 when the American landed a huge right cross that stopped Lennox in six rounds. The rematch in Las Vegas three years later is considered one of the strangest fights in boxing history. McCall was handily outclassed in the first three rounds by the Briton and then refused to box in the fourth and fifth rounds. He then began crying in the ring, forcing the referee to stop the fight and award Lewis the victory and the title.

The second upset and subsequent return to glory came against Hasim Rahman. In April, 2001, fresh from filming a scene for Ocean’s Eleven, Lewis was stopped by the 20/1 underdog in South Africa after strong right hand in the fifth dropped him to the mat. In the rematch later that year, Lewis made no mistakes blitzing Rahman in just four rounds.

In the first meeting between the two heavyweights in 1936, Joe Louis, then the number one contender for the heavyweight crown, was dealt a huge blow when the 10/1 underdog Max Schmeling stopped him in the 12th round, handing him his first professional defeat. Two years later, the pair would meet for a rematch that would transcend the sport of boxing.

With tensions between the USA and the emerging Nazi superpower across the Atlantic inreasing at a terrifying rate, the second battle between the American and Schmeling, a favourite of Adolf Hitler’s, would be much more than a routine fight.

When the bell finally rang for the rematch, this time with the heavyweight title on the line, Joe Louis blitzed Schmeling in just two minutes and four seconds, making amends for his defeat in devastating fashion. Hitler would disown his prize boxer after the embarrassing loss, but Schmeling remained great friends with Louis, with the German even helping to pay for some of the funeral costs for his old foe. 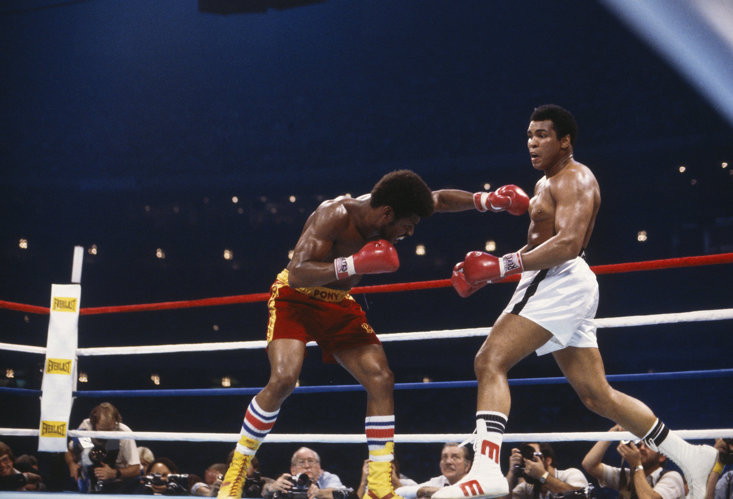 In 1978, much like his opponent had done against Sonny Liston more than a decade before, Leon Spinks shocked the world when he beat Muhammad Ali, despite only having had seven professional fights.

Ali was a shadow of his former self at this point in his career but he still had one more magical night left in his career and in the rematch that same year, he was in better shape, brought improved tactics and, in truth, never looked like he’d lose, winning back his title by a unanimous fifteen-round decision and becoming the first three-time lineal heavyweight champion.

On June 20, 1960, Floyd Patterson became the first boxer in the sport’s history to regain the heavyweight championship, something which eight other boxers before him had tried and and failed to do.

A year earlier at the Yankee Stadium, Patterson was humiliated by Sweden’s Ingemar Johansson when he was stopped inside three rounds, being knocked down a whopping seven times. In the rematch at the Polo Grounds in Upper Manhattan, Patterson was understandably the underdog given his previous showing but this time, despite nearly being knocked out again by a crunching right early on, he stunned the Scandinavian in the fifth round with a punch so ferocious it left Johansson in a crumple on the canvas with his leg twitching. 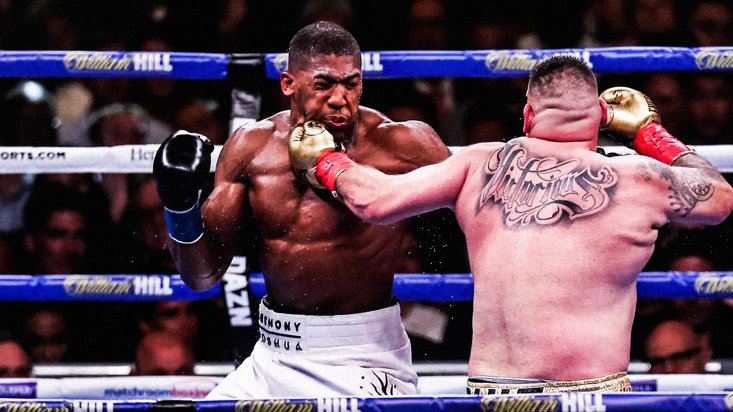 The most contemporary example of a heavyweight bouncing back from a shock defeat to win again might be a bitter pill to swallow for Dillian Whyte given it’s his bitter rival, Anthony Joshua. In 2019, late-replacement Andy Ruiz Jr stunned the world when he thoroughly outclassed the 2012 Olympic gold medallist at Madison Square Garden to capture Joshua’s heavyweight straps.

A rematch was pencilled in for December that same year and while Joshua trained with renewed vigour, Ruiz, the first heavyweight champion of Mexican descent, descended into party mode. Ruiz turned up to the sequel in Diriyah overweight and unmotivated and was easily beaten by the Brit, who claimed a unanimous decision.

x
Suggested Searches:
Tyson Fury
Manchester United
Marcus Rashford
Lewis Hamilton
F1
Air Jordan
More
boxing
Ben Askren Says He 'Let The World Down' After Losing Jake Paul...
Former UFC fighter Ben Askren has said he ‘let the world down’ after losing Saturday’s [ ... ]
boxing
Middleweight Marcus Morrison Answers the Call That Could Change...
It was many happy returns for Marcus Morrison when he received the phone call that could change his [ ... ]
boxing
Everything You Need To Know About Jake Paul And Ben Askren's...
After months of trash talk, the battle between YouTuber Jake Paul and former MMA star Ben Askren finally [ ... ]
boxing
Claressa Shields Fight Could Happen At End Of Year, Says Savannah...
It’s one of the biggest fights to be made in women’s boxing and according to WBO middleweight [ ... ]
boxing
Tyson Fury And Anthony Joshua Agree To Fight In Saudi Arabia,...
Anthony Joshua and Tyson Fury have agreed to fight in Saudi Arabia, according to reports. With the winner [ ... ]
boxing
De La Hoya In ''Talks'' With Eddie Alvarez, Five Boxing Stories...
Oscar De La Hoya has found his “big name” UFC opponent, Anthony Joshua and Tyson Fury’s [ ... ]
boxing
Claressa Shields Finds Opponent And Venue For MMA Debut In June
Two-time Olympic gold medallist Claressa Shields has found an opponent and venue as she makes the swap [ ... ]
boxing
Chris Eubank Jr Wants ''End Game'' Gennady Golovkin And Targets...
Chris Eubank Jr may have been out of the ring for the entirety of 2020 but he returns on May 1 in Manchester [ ... ]
boxing
Paintball, Pogba and Me: Marcus Morrison Talks Football And...
Marcus Morrison will soon take aim at Chris Eubank Jr, but it won’t be the first time he has had [ ... ]
boxing
Evander Holyfield, 58, Set To Take On Former Mike Tyson Foe...
Heavyweight legend Evander Holyfield looks to have found an opponent for his long speculated return [ ... ]
boxing
Conor Benn Destroys Samuel Vargas In Just 80 Seconds And Calls...
Conor Benn was in explosive form on Saturday night, blitzing Samuel Vargas with a swathe of shots which [ ... ]
boxing
“Mature” Conor Benn Confident He’ll Rise To The Challenge Against...
Conor Benn takes another step up in his promising career on Saturday night when he takes on grizzled [ ... ]
boxing
Whyte Willing To Go To Alabama For Wilder Fight, Five Boxing...
Dillian Whyte is willing to go to Alabama to set up a clash with Deontay Wilder, Claressa Shields is [ ... ]
boxing
Eddie Hearn Would Love To See A Two-Fight Series Between Ngannou...
Last week, newly-crowned UFC heavyweight champion Francis Ngannou announced his long held desire to [ ... ]
boxing
Amir Khan Warns Conor Benn Of 'Dangerous' Samuel Vargas Threat
Amir Khan has warned Conor Benn to be wary of Samuel Vargas’ "dangerous" power [ ... ]
boxing
Carl Frampton Calls Time On Stunning Career After Losing Record...
Carl Frampton has called time on his brilliant boxing career after his bid to become a three-weight [ ... ]
boxing
Conor Benn Targets Khan Or Brook, Five Boxing Stories You Might...
Conor Benn is targeting a big domestic bust-up, Devin Haney has found a test at lightweight and one [ ... ]
boxing
Everything You Need To Know About The Most Advanced Boxing Game...
Fight fans, rejoice. There’s finally a new boxing video game en route and boy, does it look [ ... ]
boxing
Dillian Whyte Ready To Fight Deontay Wilder Or Andy Ruiz Jr,...
Dillian Whyte is ready to take on Deontay Wilder or Andy Ruiz Jr after defeating Alexander Povetkin, [ ... ]
boxing
Forget The Year Of The Ox, Frampton’s Ready To Make It The Year...
It’s been one hell of a ride for Carl Frampton. He was already a two-weight world champion, the [ ... ]
boxing
Josh Warrington Seeking To Put Things Right Against Lara, Insists...
Josh Warrington will get back in the ring with Mauricio Lara to "put right" the shock [ ... ]
boxing
Dillian Whyte Blitzes Alexander Povetkin In Four Rounds To Gain...
Dillian Whyte gained revenge over Alexander Povetkin in Gibraltar on Saturday night, stopping the Russian [ ... ]
boxing
Campbell Hatton Makes Dad Ricky Proud With Professional Debut...
Campbell Hatton kicked off his professional career with a win by beating Jesus Ruiz (0-11) via [ ... ]
boxing
De La Hoya, 48, Signs Multi-Fight Comeback Deal, Targets ‘Big...
Eleven-time world titlist and six-weight world champion Oscar De La Hoya has confirmed that on July [ ... ]
boxing
Dillian Whyte In Great Shape And Blocking Out Background Noise...
Dillian Whyte insists he “doesn’t care” about outside opinions on his rematch with [ ... ]
boxing
AJ Vs Fury Could Happen At Wembley - Five Boxing Stories You...
The son of British boxing royalty makes his professional debut this weekend, Vasyl Lomachenko has finally [ ... ]
boxing
Whyte Out To Bounce Back And Prove The Doubters Wrong Against...
Dillian Whyte has vowed to prove wrong anybody who has written him off in the past and insisted he will [ ... ]
boxing
''I Want It All'' - Okolie Targets Mairis Briedis And Cruiserweight...
Lawrence Okolie looked sensational when he stopped Krzysztof Glowacki inside six rounds at the SSE Arena [ ... ]
boxing
Povetkin Dismisses Dillian Whyte's Coronavirus ''Excuse'' Claims...
Alexander Povetkin has insisted that he had a positive Covid-19 test which forced the rescheduling of [ ... ]
boxing
How Muhammad Ali Vs Chuck Wepner Helped Inspire Stallone To...
The story of Rocky Balboa has drawn influences from a number of real-life boxers but until recently the [ ... ]