At the end of this athletics season, Allyson Felix will hang up her spikes. At 36 years old, and as a mother, she will now embark on a new chapter in her life, but not before one final farewell. Tonight, she will take on Great Britain’s Dina Asher-Smith over 200m at the Diamond League in Rome, but her impact for women in sport goes way beyond the track.

The British sprint star was full of praise for the most decorated track athlete in US history ahead of the race in the Italian capital. "She's an absolute legend, an icon of grace and dignity," said Asher-Smith.

"She has done so much for us, so much for our sport. I can now have the feasible option to go and have a child and come back without the stress over whether my career would be the same when I do.”

Having won 11 medals over five Games, Felix has been a stalwart of the Olympics ever since she burst onto the scene as a teenager in Athens, and although her medal haul will undeniably and rightly crown her as one of the greatest of all time, she is so much more than what she has achieved in the sport.

As a youngster she used to keep her head down and just let her performances on the track do the talking but it got to a point where ‘staying in your lane’ wasn’t enough. When Allyson was pregnant with her daughter in 2018, she hid the news as long as possible. She forced herself to train in the dark and wore baggy clothing to hide her bump, all in the fear that sponsors Nike would slash her contract. They had already suggested a cut of 70% as Felix would be unable to compete in any major competitions while she gave birth to, and then raised her child.

This brought out a new fight in Felix. Other female athletes have had to suffer from the drastic consequences of having children but worse was to come. At 32 weeks, Felix’s daughter Camryn was suffering from life-threatening pre-eclampsia and had to be delivered by emergency caesarean section. Felix hid the news for the first month of her life as she was in and out of the newborn intensive care unit, while researching how BAME women were three times more likely to die from pregnancy related causes than white women. 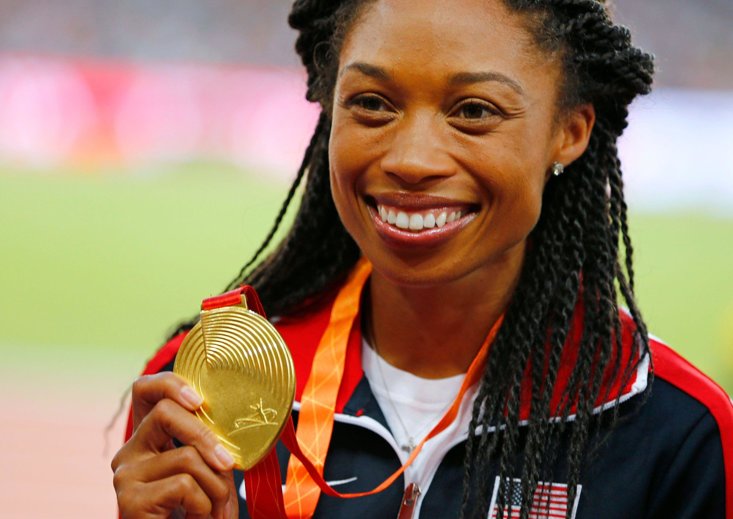 Many of these deaths were preventable and once she and her baby had recovered, she realised her words could change things. As Nike dragged their feet over maternal contract changes, she went to Capitol Hill to testify about racial bias in healthcare. With momentum and attention building around her cause, including an exclusive interview in the New York Times, Nike finally changed their tune. They released a marketing campaign and announced that sponsored athletes would be guaranteed pay for 18 months when pregnant.

“I feel like it’s definitely been a journey for me to get to the point where I guess I have the courage to do so and I think that just comes with experience in life,” she said during a press conference in Tokyo last year.

“I feel grateful to have this platform to be able to do so, because without it, it obviously wouldn’t be the same. I’m happy I was able to get to this place because there’s so much that needs to be done and I think it was just my own experience of going through it that really opened my eyes to all of it.”

Now wearing her own branded shoes, she is sponsored by the female positive brand Athleta, who also sponsor Simone Biles and who give out grants to cover childcare costs for other athletes. The words Felix has penned for her daughter sum up exactly how she feels.

“When you see me on the track, I hope you understand my fight. As an athlete who was told I was too old, as a woman who was told to know my place, as a mother who wasn’t sure I would live to raise my daughter. I hope you see that for me, it’s about so much more than what the clock says.”