Roberto Mancini took a gut punch back on 11 May 2013. Earlier that day, there came rumours that he was about to be sacked by Manchester City and replaced by Manuel Pellegrini. The FA Cup final seemed like the Italian’s last chance to keep his job just one year on from bringing City their first league title in 44 years.

But that afternoon at Wembley they lost. To Wigan Athletic. In the opposing dugout that day was Roberto Martinez, a man who had never won anything more than a third-tier championship until then and has never won anything else since.

This was meant to be a pushover. Mancini, with his suave sophistication, his decades of experience at the elite level as a player and manager, and 12 major titles as a boss, was in charge of a City side which had cost hundreds of millions of pounds. But Ben Watson’s winner that day was the death knell for Mancini at the Etihad.

It’s eight years since that day, but the two men come face to face once more at the Allianz Arena on Friday within a very different context. Martinez is now the head coach of Belgium, the world’s number-one ranked international team. Mancini, on the other hand, is just about getting his name back into the public consciousness having seen his stock tumble ever since that defeat at Wembley. Now in charge of the Italian national team, he has been making up for lost time in leading them to the quarter-finals of Euro 2020. 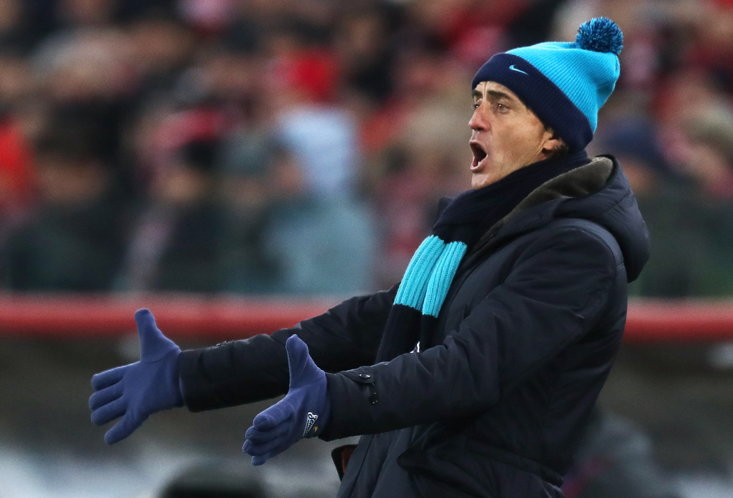 Having lost his job at City, Mancini headed to Galatasaray but lasted than a year, citing a ‘change in ambitions’ for his departure amid talk of a restricted transfer budget for the 2014-15 season. It wasn’t long before he returned to former club Inter, but their finishes of eighth and fourth in his 18 months back at San Siro, both times missing out on Italy’s three Champions League spots, were underwhelming to say the least. When he then headed for a similarly forgettable spell at Zenit St Petersburg, football watchers in Italy – let alone the rest of Europe – regarded his managerial trajectory with indifference. Beyond the occasional dip into the transfer market for players with a Serie A background, column inches involving Mancini were in short supply.

That is what has made his determination to succeed as Italy’s commissario tecnico all the more impressive. Had he been a failure as the national boss, Mancini might have been heading for the managerial scrapheap. Instead, his career seems reinvigorated.

Immediately upon being handed the job, he took a wide-ranging view of what was needed. In came a number of youngsters for his early squads, including the likes of Nicolo Zaniolo, Alessio Cragno and Pietro Pellegri, with more invited into the setup to get a proper look at what was available. Meanwhile, his backroom staff was flooded with familiar faces as he worked quickly to define a vision that he knew those around him could action.

The likes of Fausto Salsano and Attilio Lombardo had worked with him at City, among other places, while former Azzurri teammate Alberigo Evani had spent years working in the national team’s youth ranks. Giulio Nuciari came in having previously been Mancini’s goalkeeping coach at Lazio and Inter, and the whole backroom staff was headed by a certain Gianluca Vialli. The connection between them all? To a man, they were teammates of Mancini back in his Sampdoria days. 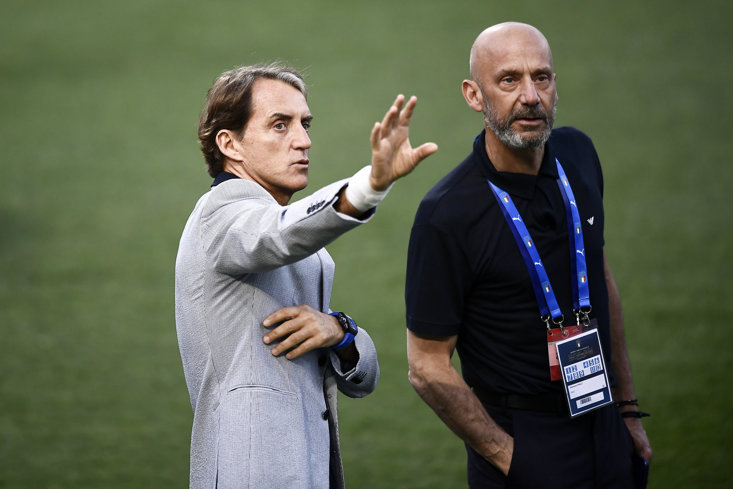 That togetherness on the coaching side has seemingly been replicated within the playing squad. Even back when their Euro 2020 selection was announced via a TV variety show complete with freestyle rap and other musical interludes, it was evident that this was a group who were in this thing together. Their performances at Euro 2020 so far have been punctuated by the hard work and enthusiasm that you would have expected of Italy sides 30 years ago, but there is also the vibrancy, flair and freedom that few Italian national coaches have been able to get out of their teams.

And riding the crest of a wave right now after wins over Turkey, Switzerland, Wales and Austria is Mancini. Heading into Friday’s crunch quarter-final with Belgium, you would be forgiven for thinking that three more wins would give the head coach the opportunity to take his pick of jobs whenever he gives up the gig.

For too long following that dreadful showing in the FA Cup final, Mancini’s reputation has been negligible. But right now, he is on the verge of something special which would define him as a manager even more than his 2012 title at City.

All that his standing in his way is a side managed by Roberto Martinez. But we’ve been here before, haven’t we?