Leeds Rhinos Head Coach Richard Agar has taken the decision to stand down from his role with the first team squad effective immediately, the club has confirmed.

It has been a disastrous start to the season for the eight-time Super League champions, having lost five of their opening six Super League games, and Agar’s role at the club was coming under ever increasing scrutiny.

The 50-year-old, who took charge following the sacking of David Furner in May 2019 and steered the Rhinos away from relegation before delivering the Challenge Cup in 2020, will still have a future role at the club, which will be confirmed at a later date.

Assistant Coach Jamie Jones-Buchanan will be the new interim Head Coach working with Sean Long and Performance Director Richard Hunwicks along with the rest of the existing rugby department ahead of this Saturday’s Betfred Challenge Cup tie against Castleford Tigers at Headingley.

Commenting on the decision, Agar said, “When I first took on the Head Coach’s job three years ago, I agreed with Kevin Sinfield and Gary Hetherington that I would do so on the basis that I could help take the team forward. I agreed to a six month rolling contract and I was happy to continue whilst ever we were making progress. However, I don’t feel like I am having the impact I would hope to on the squad

Leeds Rhinos
@leedsrhinos
Leeds Rhinos have announced that Head Coach Richard Agar has taken the decision to stand down from his role with immediate effect. Jamie Jones-Buchanan will take charge as interim Head Coach ahead of Saturday's clash with Castleford
➡ More 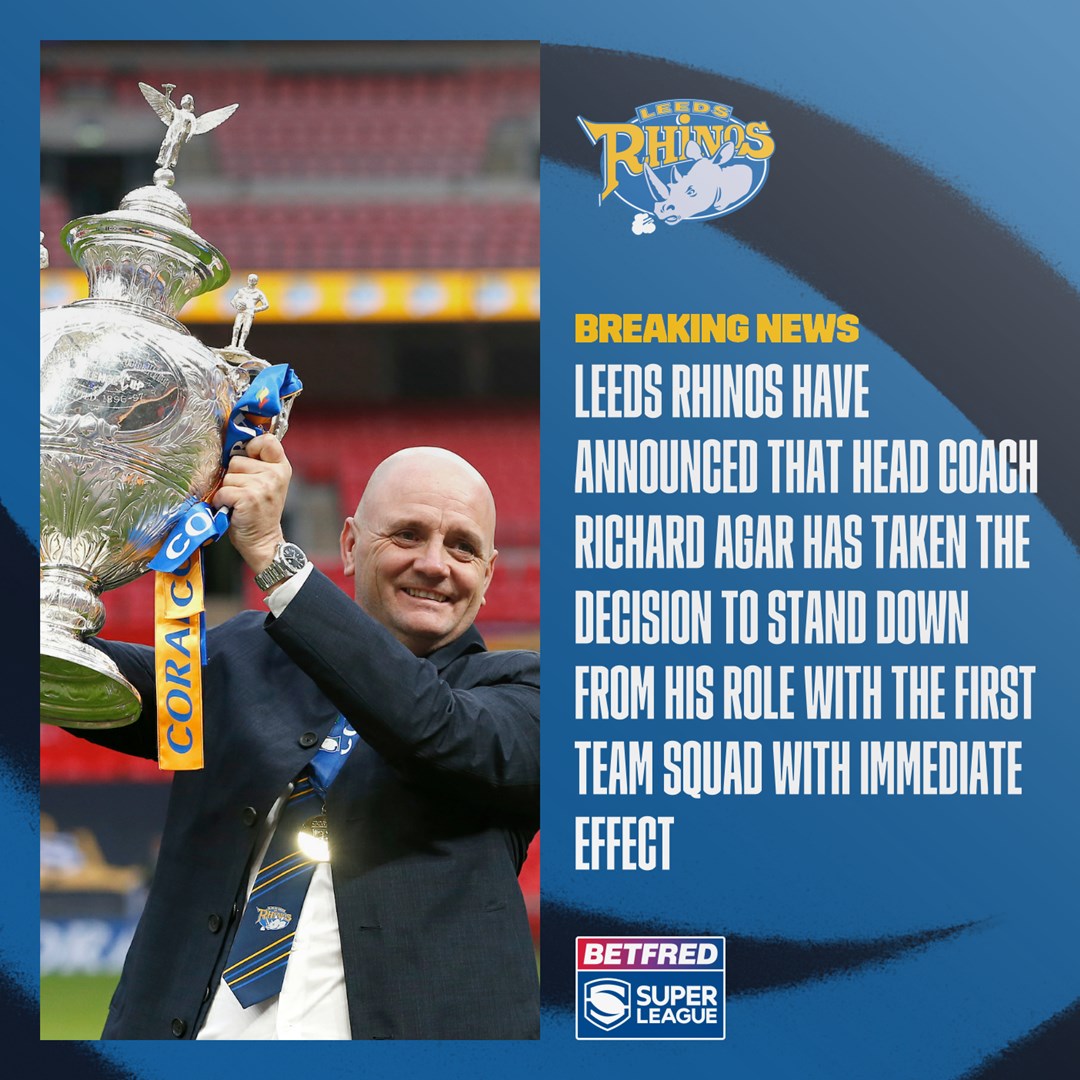 “I am proud of our record over the last three years. The club was in a tough position when I took over, we battled against relegation before facing the unprecedented challenges of Covid and an injury ravaged squad last season. On the field, we won the Challenge Cup at Wembley, reached the play offs in the last two seasons and saw the emergence of a number of highly promising young players.

“I really believe we have a strong squad who have the potential to achieve this year. They are working hard in training every day but unfortunately this has not materialised into results and ultimately that responsibility rests with me,”

Leeds Rhinos Chief Executive Gary Hetherington added, “On behalf of everyone at the club, I would like to thank Richard for his outstanding effort as Head Coach of the club. Normally with teams in this position, it is easy to identify the causes of a down turn in form such as this but in our case it is a difficult one to solve.

“The teams preparation has been good each week, the spirit within the group has been strong throughout and our coaches and backroom staff have worked tirelessly to provide our players with excellent support. We started the season with what we believed was a very strong squad with an outstanding crop of talented young players, but we have simply not converted that into team performances.

“We do plan to appoint a new Head Coach and will apply a comprehensive recruitment process but there is no predetermined timescale for this appointment.

This Saturday we entertain Castleford Tigers at Headingley and the Challenge Cup offers another opportunity to get our season started. All our focus will be on this game and then St Helens the following week as we return to Super League action. Jamie Jones-Buchanan is excited about his new opportunity and I am sure he will bring the same passion, enthusiasm and expertise to this new role as he showed throughout his playing career.”