There is an alternative history of boxing. One we will never physically see. But for a while it was there in the boardrooms of various promotional outfits. Fights have been suggested, negotiated and even signed while ultimately being destined never to make it to the ring. Some of these fights would have entered the annals of the sport as all-time greats to file alongside Hagler-Hearns, Gatti-Ward and Corrales-Castillo.

But other fights that have been signed and sealed before ultimately going undelivered are far stranger. Bouts that wouldn’t have troubled any Fight of the Year list, but are still fascinating in their absurdity. Here are five of the weirdest fights that were scheduled, but never happened.

You might be wondering why this bout is on this list. After all, Foreman and Holmes were two of the greatest heavyweights of all-time. This bout would have lit up the box office in the late 1970s. It would still have had value during Foreman’s comeback, with Holmes remaining a factor at world level in the early 1990s.

But this bout was scheduled to take place in 1999, two years after Foreman’s second retirement. This one came really close, with a fight poster being unveiled trumpeting a January 1999 date. This heavyweight battle of the aging ultimately fell apart when Foreman was paid just $1 million of his $9 million agreed up-front fee. Holmes would box that year, beating fellow veteran James ‘Bonecrusher’ Smith, and won a freak show bout with Butterbean three years later. Foreman wisely went back into retirement, this time for good.

When Rahman shocked the world by knocking out Lennox Lewis for the heavyweight championship of the world, an immediate rematch seemed like the likeliest option. Of course that’s exactly what we ended up with, as Lewis took his titles back in short order. But the course of history could have been very different.

Mike Tyson was touted as an opponent for ‘The Rock’ at this point and Rahman was reportedly more keen on this fight than a Lewis do-over. The two power-punchers would have probably made for an entertaining spectacle, and one wonders whether Tyson may have even had enough left in the tank to become a three-time champion. Instead he faced a much tougher proposition when facing Lewis for the belts he regained from Rahman, getting stopped in eight rounds. 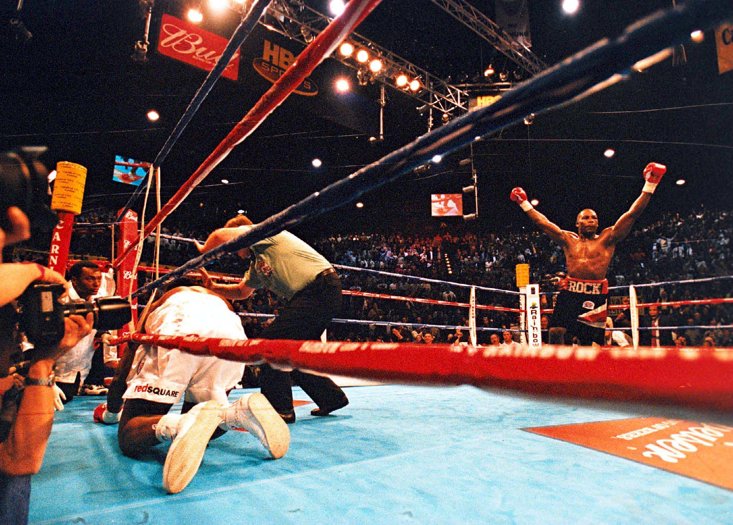 would mike tyson have been hasim rahman's next big upset?

This reads like a cross-generational dream fight to be discussed on boxing forums and social media. But in 2003, it came very close to happening. Bruno had been out of the ring since a 1996 defeat to Mike Tyson. But the former WBC heavyweight champion was keen on a bout with the Olympic gold medalist.

Harrison had floundered as a professional. He was still unbeaten but attracted criticism for facing unworthy opponents. The Bruno of the 80s and 90s would have been a stern challenge for ‘A-Force’, but after seven years out of the ring he surely wouldn’t have gone the distance. Bruno eventually thought better of it, while Harrison never quite hit the heights of the popular Frank.

Rio Ferdinand vs Somebody

Manchester United and England legend Rio Ferdinand announced his intention to take up pro boxing in a series of videos on his social media accounts. The iconic defender looked serious too and had whipped himself into tremendous shape. A press conference followed, with Ferdinand flanked by former world champion Richie Woodhall, who would serve as his trainer.

His toughest, and only, opponent would prove to be the British Boxing Board of Control. The sport’s domestic governing body refused to license Ferdinand to compete. This led to Rio being mocked mercilessly online as he announced what must rank as the quickest retirement in boxing history.

Benn enjoyed one of the most thrilling, dramatic and destructive ring careers of any British fighter. At his peak he was a merciless force of pure power. When that peak ended with three consecutive losses in 1996, the time felt right to step away. There was no shame in defeats to Thulani Malinga and Steve Collins in world title fights after all.

But considering Benn was already looking shopworn in 1996, the fact he announced a comeback in 2019 was deeply troubling. The former two-weight world champion was scheduled to face Sakio Bika at the Resorts World Arena at the age of 55. Benn was injured in training for the bout and the pandemic wiped out any chance of it being rescheduled the following year.