Football
News
After 14 years with the Gunners, Burton became Dinamo’s first-ever British player at the start of 2020
Elliott Bretland
10:00, 10 Mar 2021

When Dinamo Zagreb line up against Tottenham in the Europa League on Thursday night, there’ll be one player in particular Arsenal supporters will be eager to see start and dent Spurs’ trophy hopes. Robbie Burton was born in Gravesend and spent 14 years with the Gunners before leaving in February 2020 to become Dinamo’s first-ever British player.

Burton, who turned 21 on Boxing Day, captained Arsenal’s Under 23s and featured against Real Madrid and Bayern Munich in the 2019 International Champions’ Cup, missing a penalty in a shootout against the Spanish giants. He was classed as a bright prospect.

As for so many youngsters though, the deep lying midfielder had a decision to make as his teens came to an end. Wait for an opportunity that might not materialise or go elsewhere and take another route. Burton boldly and bravely left Arsenal, the club he had played for since the age of six, reportedly for a fee worth up to £800,000.

For a long, long while, at the start of the century, British players simply didn’t go abroad. David Beckham, Jonathan Woodgate and Michael Owen starred for Real Madrid but were the exception. Now, however, many go to test themselves against different styles of play, to experience new cultures and the German Bundesliga is very in vogue right now with Jadon Sancho shining for Borussia Dortmund. 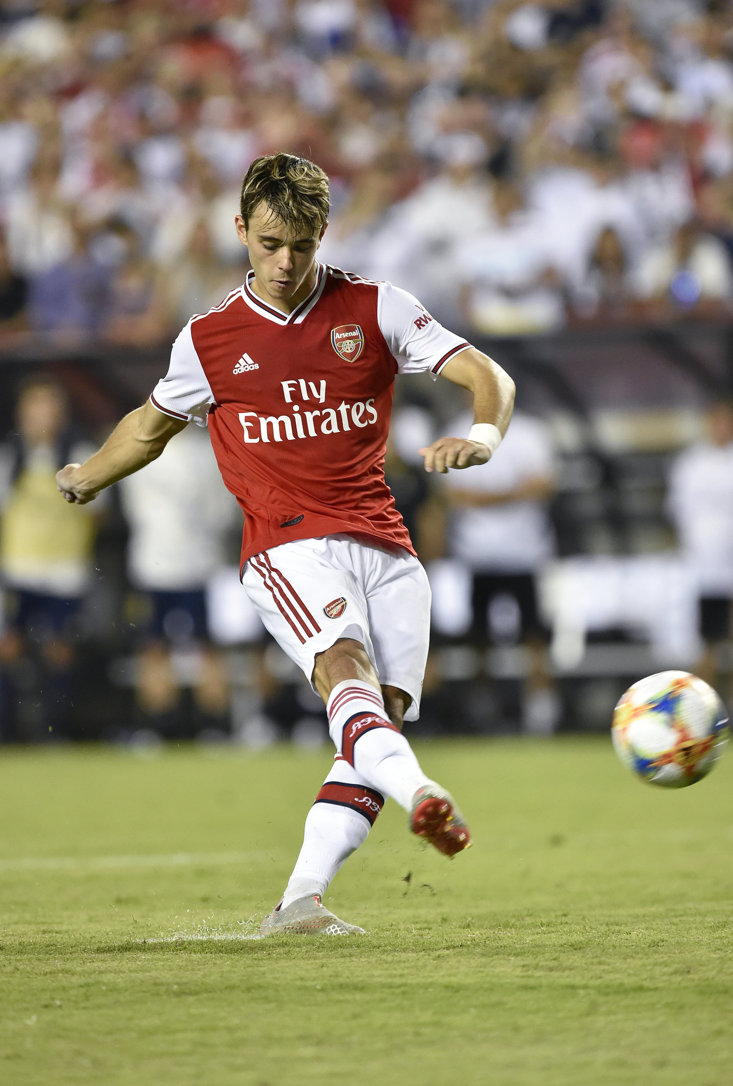 However, Burton’s switch is more niche. Of course, he is not playing in a random European outpost, Zagreb are a storied, iconic club but going to Croatia where he won’t come under as much of the spotlight or scrutiny looks a clever move.

“To leave a club that means so much to me is hard but the right decision for my career,” he tweeted after leaving Arsenal. Having played under former Gunners midfielder Freddie Ljungberg in the youth set-up, he asked the Swede for some guidance when Dinamo came knocking.

“Fredrik Ljungberg gave me a lot of strong advice, and when I told him that I had the option of going to Dinamo, he immediately told me that it was a good option for me and that I would definitely progress in Dinamo,” he told Croatian publication 24sata in November. “I hadn't known [Arsenal manager] Unai Emery long enough to talk about such things, though.”

He has no regrets and hasn’t ruled out working hard to return to the Emirates one day, adding, “I dreamed about it [playing for Arsenal] as a child, but life has its own [way]. Who knows, maybe one day I will make that dream come true, but now the only thing on my mind is Dinamo.”

Burton seemed to settle into Croatian life quickly, telling the press he enjoyed the food and technical elements of the game out there. The fact he made such a move shortly before a global pandemic, will have increased the pressure. So, too, an earthquake, which struck in March which will have made for a bumpy arrival.

“Uh, I was in Zagreb, I lived alone and I experienced an earthquake like this for the first time,” he said. “Even today, I see works in the city centre, so I believe that everything will be restored quickly.”

However, despite the world being shaken to its core in so many ways right now, he has remained focused on the task in hand.

“I feel really good here,” he said after signing. “I’m happy here. Dinamo has a great history, they are winners, just like me and I can’t wait to play.” 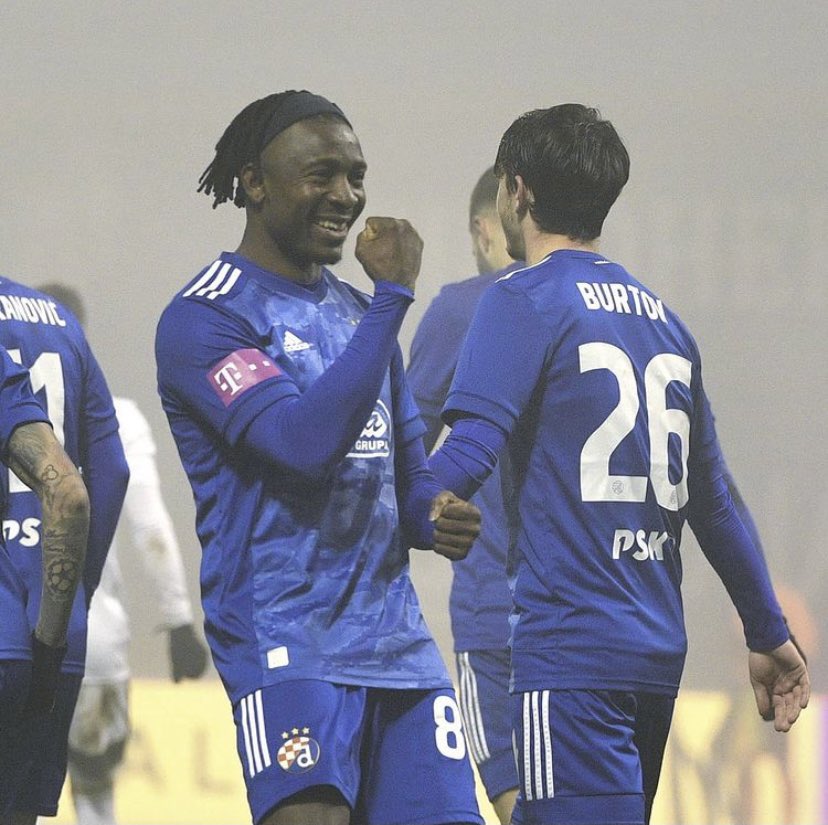 He’s a confident young man and he’s not wrong either. While the club have won 21 league titles in Croatia, they have been victorious in seven of the eight games Burton has featured in so far this season. First appearing for the youth team, the Dinamo team Luka Modric played in before excelling in north London, he has broken into the first-team and started in the 3-0 win over Slaven at the end of February.

With eight caps for Wales under 21s already under his belt, he will be hoping his move can accelerate his career further. Featuring against Spurs in European competition would give him the opportunity to remind people in the capital of what he can do, though those of a red and white persuasion will have been following his progress.

He is still in ‘constant contact’ with his Arsenal team-mates, telling Croatian media in November, “That’s the way it is in football, everyone goes their own way, but friendships stay forever.”

One would expect Burton will be getting heaps of good luck messages this week. While he didn’t appear for the Gunners’ first-team, he can still make his mark in the folklore of the north London rivalry.

“It's something that will stay with me that I didn't play for Arsenal in a competitive game. But you can't always get what you want - no matter how much I wanted it,” he told Tribal Football.

Burton will not have anticipated being back in north London so soon after leaving for Croatia but football has a funny and quirky way of throwing up these instances. Sure, he didn’t play for Arsenal, but taking on Tottenham as a former Gunner in European competition isn’t bad for the CV.

Burton took the plunge and hopefully his bravery will be rewarded with a start against the old enemy. A win would write another page in his Arsenal story.

x
Suggested Searches:
Manchester United
Liverpool
Manchester City
Marcus Rashford
Premier League
More
football
Coady And Jimenez Among The Keys As Lage Seeks Flying Start...
It is the dawning of a new era for Wolverhampton Wanderers this season. Nuno Espirito Santo has moved [ ... ]
football
Five EFL Championship Players To Watch In 2021-22
The Sky Bet Championship gets underway in less than a week and fans cannot wait for another season of [ ... ]
football
Reunion With Craig Gordon A Reminder Of The Leaders Celtic Are...
Celtic’s Scottish Premiership opener will include a reunion with ex-goalkeeper Craig Gordon when [ ... ]
football
Theo Walcott Can Finish His Career On A High After Returning...
Theo Walcott was once England’s youngest-ever debutant, a speedy forward ready to put the frighteners [ ... ]
football
Treble Or Failure? Expectations Are Sky High For Gerrard And...
This time last year Rangers were a team with loads to prove and a big hole in their trophy cabinet. [ ... ]
football
Sam Kerr-Inspired Matildas Send Team GB Crashing Out Of Tokyo...
Sam Kerr inspired Australia to the semi-finals of the Olympic football tournament after a 4-3 victory [ ... ]
football
Graham Potter Will Face His Sternest Test As Brighton Manager...
Brighton and Hove Albion are about to get underway in their fifth consecutive season in the Premier [ ... ]
football
The Bold, The Brash And The Bizarre, The Best Kits For The 2021/22...
The 2021-22 season is only days away and it is time to decide on some of the nicer football kits that [ ... ]
football
Celtic Champions League Woe: Postecoglou Can't Carry The Can...
“We never stop,” insisted Ange Postecoglou to his Celtic players. “If our movement’s [ ... ]
football
Time For Dyche And Burnley To More Than Just Make Up The Premier...
Burnley are about to enter their sixth consecutive season in the Premier League, and it is time for [ ... ]
football
Toby Alderweireld Exit Another Step Closer To End Of Pochettino...
Toby Alderweireld’s Tottenham Hotspur departure is another step closer to the end of Mauricio [ ... ]
football
USWNT's Olympic Woes Are Not New But The Concern Is Very Real
We’ve been here before with the United States women’s national team… just not very [ ... ]
football
Brentford Are Way More Than Just Ivan Toney As They Approach...
Brentford will be the 50th side to have ever played in the Premier League when they begin their season [ ... ]
football
#HerGameToo Survey Reveals Shocking Scale Of Sexist Abuse Towards...
The social media movement #HerGameToo aimed at stamping out sexism in football has released the results [ ... ]
football
Future Chelsea Boss? John Terry's Aston Villa Apprenticeship...
Steven Gerrard is about to lead a title defence with Rangers, Wayne Rooney is fighting fires at Derby [ ... ]
football
Scottish Premiership Betting Preview: Rangers To Dominate Under...
The Scottish Premiership is back this weekend with a tasty opening round of fixtures kicking off the [ ... ]
football
Will Watford's Hire And Fire Policy Keep Them In The Premier...
In less than two years, Watford have had four permanent managers. Xisco is the man currently in the [ ... ]
football
Varane & Maguire Partnership Could Be Crucial to Man United's...
With the impending arrival of French centre-back Raphael Varane from Real Madrid, Manchester United [ ... ]
football
Everything You Need To Know About The Opening Weekend In The...
The 2021/22 Scottish Premiership campaign gets underway this weekend as Steven Gerrard’s Rangers [ ... ]
football
Norwich Should Be Praised For Trying To Do Things Differently...
Norwich City are always beaten with the same stick. Even when they were promoted in May, their social [ ... ]
football
On This Day In 1974: Bob Paisley Becomes Liverpool Manager As...
Much is made of Bill Shankly’s legendary impact in transforming Liverpool from a failing second [ ... ]
football
Welcome Home! The Footballers Who Returned To Their Boyhood...
Lukas Podolski has made a dream move to his boyhood club Gornik Zabrze at the age of 36, fulfilling [ ... ]
football
Former Team GB Manager Stuart Pearce Reflects On London 2012
Only one man in history has managed a men’s football team for Team GB at the Olympic Games. Back [ ... ]
football
Why Are David Beckham's Inter Miami Failing Under Phil Neville?
It wasn’t meant to work out like this. David Beckham, one of the most famous sportsmen on the [ ... ]
football
Lauren James' Chelsea Return Will Be Major Boost For The Blues...
Lauren James has returned to Chelsea and it is certainly a signing that will excite Blues fans. Having [ ... ]
football
Tokyo 2020: All The Results From The Opening Round Of Olympic...
The first round of football fixtures for the Tokyo Olympics have been completed, with an excellent result [ ... ]
football
Why Rafa Benitez's Everton Transfer Business Makes Sense This...
Rafa Benitez has got his Everton rebuild underway with the new additions of wide-men Andros Townsend [ ... ]
football
Ellen White Brace Sees Team GB To Comfortable Win In Olympic...
Team GB’s women’s football team got their Olympic campaign off to a flying start after they [ ... ]
football
Is Managing Team GB's Football Team At The Olympics An Impossible...
The Team GB women’s football team get their Olympic campaign underway on Wednesday morning against [ ... ]
football
Salford City or Bradford? Early Pre-Season Tips For The 2021/22...
The League Two season is now just over two weeks away and clubs will be desperate to welcome back fans [ ... ]