Chelsea are reportedly circling Manchester United striker Cristiano Ronaldo. While it is no surprise to see the Stamford Bridge hierarchy chasing one of the game’s elite forwards, it is not an approach that has worked well for them in the past. Diego Costa aside, Chelsea have usually fumbled in the striker market over the last two decades. They failed so miserably to replace Didier Drogba that the Ivory Coast star was brought back to the club for a second spell two years after leaving.

If they do sign Ronaldo, will it be a stroke of genius from opportunistic owner Todd Boehly, or the latest in a series of expensive follies? Time will tell, but here are some previous failed forwards who suggest it might not go quite to plan for CR7 at Stamford Bridge.

Signed in Roman Abramovich’s first summer spending spree, the Parma forward was supposed to be a signal of intent. Instead, he scored six Premier League goals in his first season, fell out with new boss Jose Mourinho in his second and then failed a drug test. He was released and ended up at Juventus.

The £5.3 million signing from PSV Eindhoven took on Jimmy Floyd Hasselbaink’s number 9 jersey. It would be the start of a sharp decline for that famous shirt, as the new man failed to replicate the electric scoring form he showed in the Eredivisie. The Serbian striker was sold to Atletico Madrid after one season in west London.

After the failure of two emerging talents, Chelsea decided to land an off-the-rack superstar. He barely performed better than Kezman and Mutu. The AC Milan legend seemed caught off-guard by the pace and physical demands of the Premier League, and was loaned back to the San Siro after two seasons.

A reliable one-in-three goalscorer for Bayern Munich, Pizarro was another that found the Premier League a (Stamford) bridge too far. Two goals in 32 games across all competitions saw the misfiring forward quickly loaned back to the Bundesliga, where he recaptured his form for Werder Bremen.

Though not quite on the level of some of the faded big names on this list, Di Santo still struggled during his season in royal blue. The Argentine did not find the net in his 16 Chelsea appearances, and could only manage one goal on loan at Blackburn Rovers. A move to Wigan Athletic saw him capture some form, and he would later win three Argentina caps. 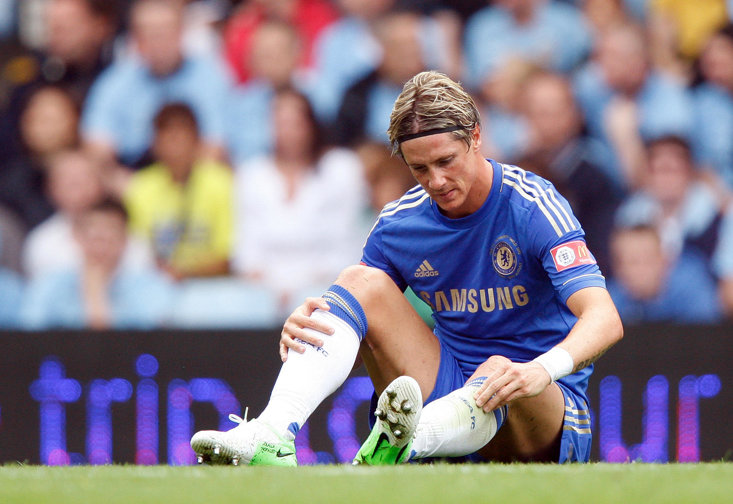 Chelsea broke the British transfer record, spending £50 million to capture Liverpool’s superstar forward. Torres had lit up Anfield and looked set to do the same at Stamford Bridge. When he only scored one goal in his first half-season at Chelsea, the writing was on the wall. Things never really improved, and he eventually returned to Atletico Madrid.

A bizarre capture that evoked memories of Juan Sebastian Veron’s time at the club, Chelsea loaned Falcao from Monaco despite the forward’s rotten spell at Manchester United in the previous season. He played just twelve games for the club in an injury-marred season, scoring once.

Brought in on loan due to Falcao’s injury woes, Pato is the ultimate blink-and-you’ll-miss-it Chelsea signing. The formerly-promising Brazilian played just two games for the club, scoring a penalty on his debut against Aston Villa.

A club record arrival after a breakthrough season at Real Madrid, Morata never quite fit in at Chelsea. A missed penalty that cost Chelsea the Community Shield was an inauspicious start and was the precursor to two below-average seasons. Morata had the unusual distinction of being the most expensive player to be loaned out in world football when Chelsea lent him to Atletico Madrid.

Prolific for Real Madrid, Napoli and Juventus; Higuain’s goal-getting ways were only intermittently on show at Stamford Bridge. Loaned by former Napoli coach Maurizio Sarri, the pair never gelled as effectively as they did at Stadio San Paolo. This move might have come too late for the player, considering he only played one subsequent for Juventus before heading to the MLS.

The latest victim of Chelsea’s striker curse, Lukaku returned to Chelsea amid much fanfare last summer. A tactical mismatch with Thomas Tuchel’s style, an incendiary interview about his unrest at the club and some very average on-field displays followed. Lukaku has now returned to Inter Milan, the club Chelsea paid £97.5 million for his services, on loan.