After a series of middling performances in recent weeks, Ole Gunnar Solskjaer shuffled his deck at Old Trafford this afternoon. Cristiano Ronaldo, Paul Pogba and Jadon Sancho all started Manchester United’s 1-1 draw with Everton on the bench as Solskjaer handed Edinson Cavani and Anthony Martial rare starts. The latter did reward his coach by getting on the scoresheet, and United played brightly at times. But Everton exposed United’s nagging flaws in a lively performance from Rafael Benitez’s men. A draw was a fair result on balance, with both sides enjoying periods in the ascendancy during a frenetic early kick-off.

United started the half on the front foot, and after missing the Villarreal game, their full backs were particularly impactful. Aaron Wan-Bissaka threatened with an early one-two with Mason Greenwood, while Luke Shaw powered up the other flank for a passing exchange with Bruno Fernandes. The Portugal international could not find him in the box, but it was an early signal of intent from the home side. Wan-Bissaka cleverly worked himself into space high on the right, but his back-post cross was headed wide by Martial. Victor Lindelof found Shaw out wide with a superb long pass as United looked to stretch play, and the opening quarter of an hour was their best period of the half.

United’s best early chance arrived when Fred found Edinson Cavani unmarked in the box. You would have bet the house on the Uruguayan nodding into Jordan Pickford’s net, but he made it too easy for the England keeper, who palmed it away. Everton then began to threaten. A fluid move saw the ball land at Salomon Rondon’s feet, but the former Newcastle man saw his shot blocked by Lindelof. 20-year-old Anthony Gordon then got the better of Wan-Bissaka, and played an enticing centre. The ball was out of Rondon’s reach, and Shaw made an excellent block ahead of Andros Townsend, before Raphael Varane cleared his lines. 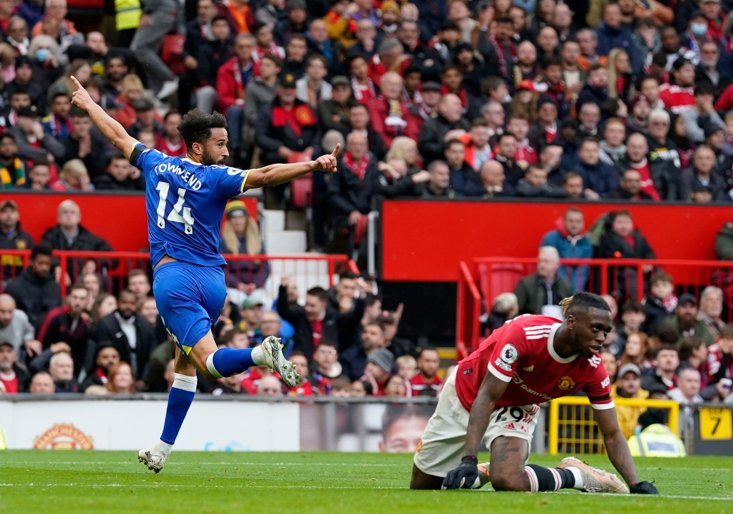 After a confident start, United looked to be in danger of letting the game slip away. Everton were attacking in waves now, the best chance coming when Demarai Gray broke through the lines to draw an excellent low save from David De Gea. If there is one thing a Solskjaer United team knows how to do though, it’s counterpunch. Fernandes layed off a wide ball to an on-rushing Martial, and the Frenchman struck the ball with such venom it felt like he was exorcising himself of eight goalless months of frustration. The Red Devils went in at the break leading 1-0, but had been warned by Rafael Benitez’s motivated side on a number of occasions.

The second half started in much the same way as the first, with the home side attacking with intent. Sancho came on for the injured Martial, while Ronaldo replaced Cavani shortly after the break. Rather presciently, Solskjaer seemed to realise one goal would not be enough. Everton led credence to this when the excellent Gray once again left the United defence chasing, before losing his footing in the box while shaping to shoot.

The United substitutes linked up well, when a brilliant Ronaldo break found Sancho in the box. The former Borussia Dortmund winger could not get a shot away, but found Fernandes who played McTominay in for a miss. This dangerous passage of play would be punished for lack of end product when Townsend scored shortly afterwards. An excellent move, Gray overpowered Fred wide on the left before charging towards the box. The winger played Abdoulaye Doucoure in, who found Townsend, and the resurgent veteran slotted the ball low to De Gea’s right for the equaliser. The England international appropriated Ronaldo’s signature celebration, no doubt compounding the misery of the home crowd.

Solskjaer brought Pogba on for Fred, restoring his usual starting eleven to proceedings, apart from the injured Harry Maguire. The France international is often criticised for not standing up and being counted in games like this, but to his immense credit he worked tirelessly. At times, Pogba was trying to win the game on his own, going close from a header and bending a long-range shot just wide.

It was less than a dream afternoon for the Old Trafford club, but it nearly became an utter nightmare. Tom Davies found himself in acres of space on the right, but chose to slot in Yerry Mina rather than shooting. The defender applied the finish and wheeled away celebrating, but VAR correctly chalked the goal off for offside.

When the final whistle chimed, Ronaldo stormed straight down the tunnel. Solskjaer’s decision not to start him, and this reaction, is sure to drive headlines. But with the forward having completed 90 minutes in midweek, and not performing well despite his late winner on that night, the decision was not a terrible one. Had United converted one of a number of chances, nobody would even be talking about the omission. But football is a results business, and this will invite more pressure onto United and Solskjaer, as another Premier League game slips by without a win.