It was a sight as familiar as the gulping down of glasses of Pastis or the packed sands and waters of Plage du Prophète in Marseille. The Stade Velodrome, and a helpless Dutch defence, bearing witness to the finest footballer on planet earth taming an arcing Rivaldo through ball with a first touch akin to Khabib Nurmagomedov placing his hand on your shoulder before the commencement of the first round.

Something very, very bad was about to happen to his opponent. The touch told them so. They knew what was coming. And there was less than nothing they could do about it.

Phillip Cocu desperately slid along the turf, more as a token gesture than anything else. Edwin van Der Sar made his 6ft 6in frame as intimidatingly large as possible. All in vain. The giant Dutch goalkeeper about as intimidating as a field mouse in front of a jaguar galloping in full flight. The second touch guided the ball through the legs of the onrushing Ajax goalkeeper and into the back of the net.

All in a few second’s work for Il Fenomeno.

Four nights later, a little under 500 miles north in Paris, the ball bounces across the turf of the host nation’s 18-yard box inside the Stade de France. Rivaldo and Roberto Carlos’ slyly engineered free-kick evading the outstretched lean of Stéphane Guivarc’h. Ronaldo’s deft nod creating a couple of yards of space roughly eight yards from goal. Only one outcome.

Not this time. The ball instead nestled into Fabien Barthez’s midriff. A solid save. A vital one, in fact. But one which, considering the quality of effort it prevented from crossing the line, was shockingly routine.

Thirty four goals in 47 games for Internazionale during the campaign leading into the 1998 World Cup. A ludicrous 47 in 49 for Bobby Robson’s Barcelona the season before that. Four in six throughout the World Cup itself. There would be no fifth.

This supernatural 21-year-old, the phenom barely out of his teens who was the reigning Serie A, UEFA and FIFA World Player of the year, lashed his drive square at the diminutive French goalkeeper. The Ballon d’Or holder cut a figure bereft of presence or confidence. Someone who would rather be anywhere else in the world than playing in his first World Cup final. 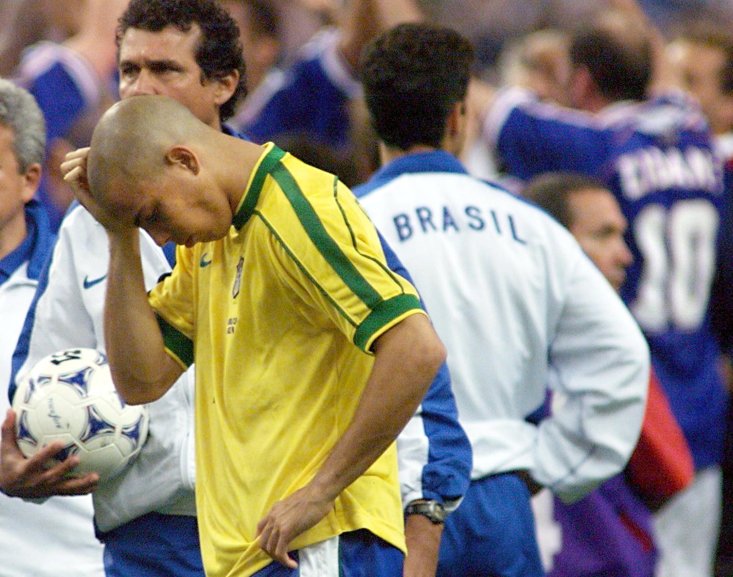 Seventy two minutes prior to kick off, Ronaldo wasn’t even on Mario Zagallo’s team sheet.

"I decided to get some rest after lunch and the last thing I remember was going to bed,” Il Fenomeno told Four Four Two in 2020.

"After that, I had a convulsion. No one wanted to tell me what was going on. I asked if they could leave because I wanted to sleep. Then Leonardo asked me to go for a walk and explained the whole situation.

“I was told that I wouldn't play in the World Cup final.”

Of course, Ronaldo would sway Zagallo back towards naming him, and not his proposed replacement Edmundo, in the starting XI. It was to the detriment of the entire Brazil team, who played like strangers for the entire 90 minutes. Ronaldo, who would win the tournament’s Golden Boot, played as if a lookalike had been dropped onto the pitch in his place as some sort of elaborate prank. No run was timed right, no first touch stayed under his spell. Everything bounced off or away from his control.

Ronaldo would play only 54 more times for Inter over the next four seasons. Ruptured knee cap tendons so severe his physiotherapist Nilton Petrone claimed "his knee-cap actually exploded”, citing it "the worst football injury” he had ever seen.

Fast forward four years from the convulsion-laden catastrophe of 1998. International Stadium, Yokohama. Different opponents, same stage. Germany in the World Cup final awaited Ronaldo and the rest of the seleçao. With due respect to Die Mannschaft’s class of ’02, they were far from a vintage outfit. But still, Germany in a World Cup final is never an undertaking anybody looks forward to enduring.

One player enjoyed it though.

In fact, he enjoyed the entire tournament. Call it making up for lost time.

Ronaldo scored in all but one game (against England in the quarter-final) of the 2002 World Cup. Briefly, in the final, there was a hint that things might be going the way of ’98. A one-on-one situation presenting itself with Oliver Kahn, Germany’s blonde haired behemoth of a custodian. Ronaldo tamely jabbed a left-footed effort well wide of the far post. A few minutes later, a bouncing ball over the top was sloppily controlled and again, Kahn reigned supreme. On the stroke of half-time, a Roberto Carlos shot was controlled and fired goalwards. Repelled by the legs of Kahn. Ronaldo’s luck was as bad as his choice of hairstyle that summer. 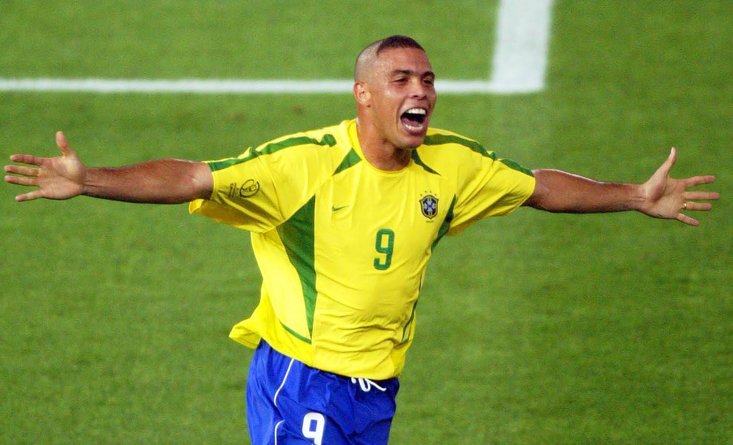 Half way through the second period, Rivaldo took flight from 25 yards. The imperious Kahn spilled. The inevitable Ronaldo capitalised. 1-0. Twelve minutes later, Rivaldo dummied Kleberson’s roll across the edge of the 18-yard box, the ball landing at a Mercurial Vapor encased right foot, which caressed it past Kahn. 2-0. Name on the trophy. A Golden Boot to be cherished, rather than scorned. Ballon d’Or and a move to Real Madrid incoming.

In the twilight of his career, Ronaldo Luís Nazário de Lima would be castigated by fans and pundits alike for weight problems and how they pertained to his overall fitness levels. Disgracefully, with the advent of his fellow free scoring Portuguese namesake, he would be rechristened ‘Fat Ronaldo’.

Imagine being hung up on the weight of a kid who turned the ankle ligaments of peak Serie A’s defences to Cheesestrings. Paolo Maldini would rather sit through 10 consecutive 2005 Champions League finals than be in possession of the memory of the torment he was caused by this Carioca from Cruzeiro. A bull in ballet slippers. A phenomenon. The phenomenon.

In 1994, he watched from the sidelines as his country won the lottery of penalties against Italy to become World Champions. In 1998, fortune deserted him at the most crucial of moments. In 2002, he cemented his legacy. The grand finale in the most perfect of third acts. Jules Rimet aloft. Redemption.