Football
News
United's 3-2 victory over Arsenal had something for everyone, but as usual it's Ronaldo who stands tall.
Joey Mills
22:14, 02 Dec 2021

For the first time in a long time, Manchester United and Arsenal put on the sort of game that might penetrate those Keane and Vieira era video packages that haven’t been updated since 2005. Whether it was the intoxicating glow of playing under the lights, or the fact both teams have finally declined to a level where they’re evenly-matched, this was an absolute Premier League classic. Bizarre goals, scoring milestones, pitch invaders, penalties; this game had everything. Well, everything apart from a fight in the tunnel.

Manchester United interim manager Ralf Rangnick was at Old Trafford watching the game, and he may have allowed himself a wry smile at Arsenal’s early pressing. The German is known to favour an aggressive press, and Mikel Arteta’s men went about their work with intensity. United could barely get out of their own third, as the Gunners closed them down frequently. Gabriel Martinelli almost chased Alex Telles off the pitch at one point to win the ball back for his side.

While Arsenal had the better of the early play, the way they went ahead at Old Trafford has to be seen to be believed. Emile Smith Rowe scored one of the most bizarre goals in Premier League history, in a moment that is sure to be debated for days to come.

Fred accidentally trod on David De Gea’s foot as a corner came in, and the Spain stopper fell to the ground clutching the injury. The ball filtered out to Smith Rowe, who was oblivious to the empty net as he instinctively steered his shot into it. The celebrations were quickly muted, as referee Martin Atkinson checked on De Gea. A slow motion replay showed him move his whistle towards his lips as Smith Rowe shaped to shoot, but he hesitated, and the goal was scored. This lack of whistle appears to have been the pivotal factor in the goal being given, as the game had not been stopped when it was scored. A truly unprecedented way to open the scoring.

Never one to allow himself to be overshadowed, Cristiano Ronaldo tried desperately to net his 800th career goal for club and country. After a couple of speculative early attempts went straight down Aaron Ramsdale’s throat, the Portugal international began trying to mark his milestone with something a bit special. Ronaldo twice attempted to score an overhead kick. The first attempt was deftly nodded away by Ben White, while the second went hopelessly wide as the sound of pantomime boos reverberated around the Theatre of Dreams. 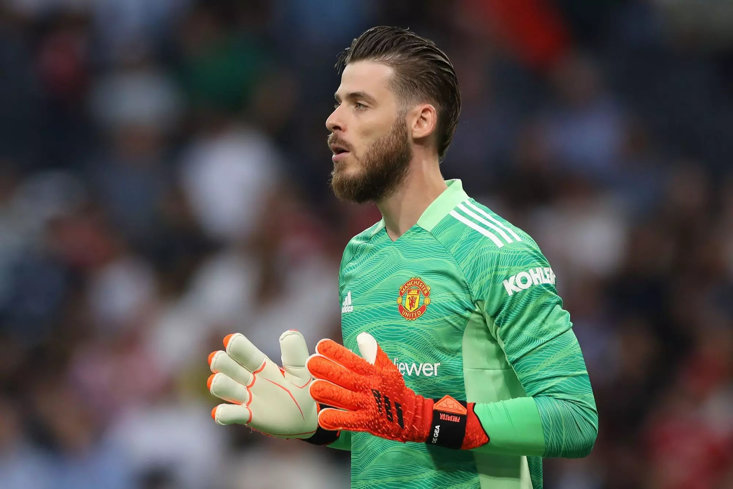 Ronaldo’s international teammate Bruno Fernandes scored United’s equaliser on the stroke of half time. The midfielder had gone 15 games without a goal, and looked visibly galvanised as he punted the ball out of his hands in celebration. The goal was brilliantly worked, with Jadon Sancho creating space out wide and playing in Fred, who instinctively found Bruno. United’s talisman produced a tidy finish to put his side on level terms.

The second half started at a bruising pace, with both goalkeepers having saves to make just after the break. De Gea brilliantly palmed away a Gabriel header, before Ramsdale denied Ronaldo at the near post. But was not long before the two nets were breached.

First, Ronaldo netted for the 800th time in his breathtaking career. It was a goal that summed up the modern Cristiano. Rashford jetted up the wing in the way Ronaldo himself once did, before squaring it to the forward. Ronaldo was positioned centrally about twelve yards out to apply a finish befitting of the central striker he has become. The iconic “Siuuuu!” echoed around Old Trafford in recognition of the player and his outstanding achievement.

Arsenal’s riposte was remarkably similar. Martinelli played the Rashford role, playing an enticing ball across the box. Ronaldo’s former Real Madrid colleague Martin Odegaard was the one to apply the finish, netting coolly to draw the Gunners level.

The Norway international’s joy would soon fade, as United were awarded a penalty for his careless tackle on Fred. Ronaldo stepped up and smashed it down the middle for goal 801. On a night like this, it was no surprise the Portuguese superstar didn’t offer first refusal to his countryman Fernandes.

As if this game had nothing memorable left to give, there was then a brief pause during an Arsenal corner as a spectator attempted to run onto the pitch and was chased down by police. These nights bring out all sorts of emotions, including idiocy.

The five minutes of added time brought about a breathless finale. Arsenal through everything at the home side in a final frantic bid to escape with a point. United tried everything in their power to slow things down, and wave off caretaker manager Michael Carrick with a win. The home supporters did their bit to try and run the clock down, taking their time in giving the ball back when it ended up in the crowd.

As Manchester United prepare to enter a new era, they provided a game that evoked their classic battles of the past. As far as building blocks go, Rangnick could not have asked for much better. It will be fascinating to see what he has in store for this side.