Football’s a simple game. Twenty-two players kick a ball around, and after 90 minutes Cristiano Ronaldo enters the history books.

The Portuguese legend was at it again on Wednesday as he converted a pair of penalties in a breathless night of action in Budapest to earn Portugal a 2-2 draw with France which gained his nation a place in the Round of 16 at Euro 2020.

His brace took him to 109 goals in his international career, matching the tally of Iran’s Ali Daei between 1993 and 2006. Of all his various achievements over the course of his magnificent spell in football, this might be Ronaldo’s biggest claim to fame yet.

That it clinched his side, who are now 11/1 to win the tournament with Betfred, a trip to Seville on Sunday to face Belgium was reduced to sub-text as a game which contained three penalties, a goal awarded by VAR and enough swings in momentum to make you dizzy was headlined by the guy in the No.7 as is so often the case.

The first goal came about from a judgement call decision by referee Antonio Mateu Lahoz. As Danilo and Hugo Lloris both went for a high cross, the Portugal man got there first but Lloris’ fist then made contact with the ball before the keeper went crashing into the Paris Saint-Germain midfielder. Mateu Lahoz pointed to the spot, to the chagrin of the French players, with Lloris left wondering what else he could have done but to stay on his line and probably get beaten by Danilo’s header. 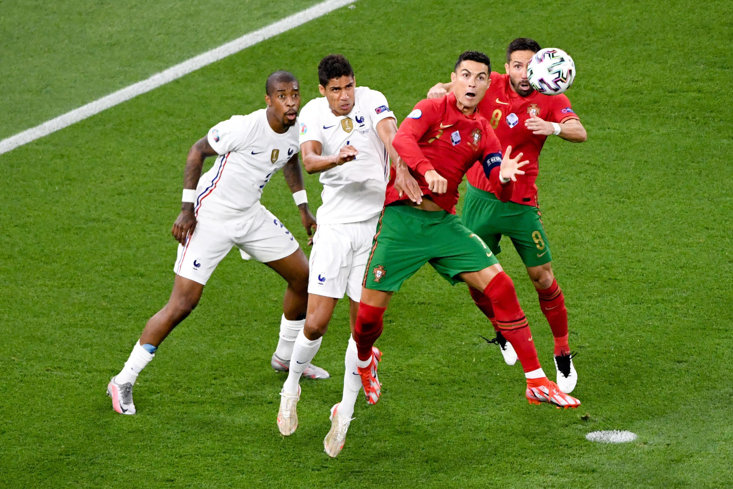 Whatever the technicalities of the decision, Ronaldo made no mistake from the spot. It was his fourth goal of the tournament and his 108th in total for Portugal. There would be more to come, but first France got themselves ahead.

First they were awarded a controversial penalty of their own. Kylian Mbappe ran into Nelson Semedo in the box and collapsed to the ground, and the referee gave another penalty. Karim Benzema stepped up and it was 1-1.

Benzema had another just after the interval, as he latched on to a wonderful Paul Pogba through-ball and tucked a shot just inside the far post. It was deadly finishing and a wonderfully-timed run, to the extent that VAR had to rule after the assistant referee had wrongly raised his flag.

Guess what happened next… Yes, another penalty. This time, Ronaldo went into the history books. After Jules Kounde had got a hand on his left-wing cross, the Juventus man stepped up to blast home an equaliser. With it came number 109.

In an increasingly see-saw contest, France could have been back ahead when Pogba’s wonderful curling shot from distance was tipped onto the angle of post and bar by Rui Patricio, who then immediately jumped up to keep out Antoine Griezmann from the loose ball. It was to prove a key moment in the final outcome of a crazy game.

France face Switzerland next in Bucharest, while Portugal meet the world no.1 Belgians. Ronaldo? He’s probably got another 109 goals in him yet.