Football
News
The Swans lost out to Brentford again but things are still looking up
Gary Maiden
17:02, 29 May 2021

For the second season running, Swansea City have failed to progress from the Championship play-offs after falling to a 2-0 defeat to Brentford at Wembley.

Steve Cooper’s side found themselves two goals down inside 20 minutes after an Ivan Toney penalty and superb Emiliano Marcondes volley.

They were almost down and out a minute later when Toney’s spectacular volley crashed off the underside of the crossbar to come within inches of handing him his first goal of the season from outside of the penalty area.

The Welsh outfit rallied after the break, and Andre Ayew was a whisker away from pulling a goal back moments after the restart as he arrived late at the back post to send his header just wide.

Any hopes of a late comeback were put to bed when Jay Fulton was sent off with 25 minutes left on the clock after a lunge from behind on Mathias Jensen.

It was a cruel end to the season for a player who has quietly been one of Swansea’s better performers, but referee Chris Kavanagh was left with no choice after what was a dangerous challenge.

From that moment on, it was all about game management from Thomas Frank’s men, who finally put to bed an unwanted record of unsuccessful play-off campaigns in each of their previous nine attempts.

But after more play-off disappointment, where exactly do Swansea and Cooper go from here? 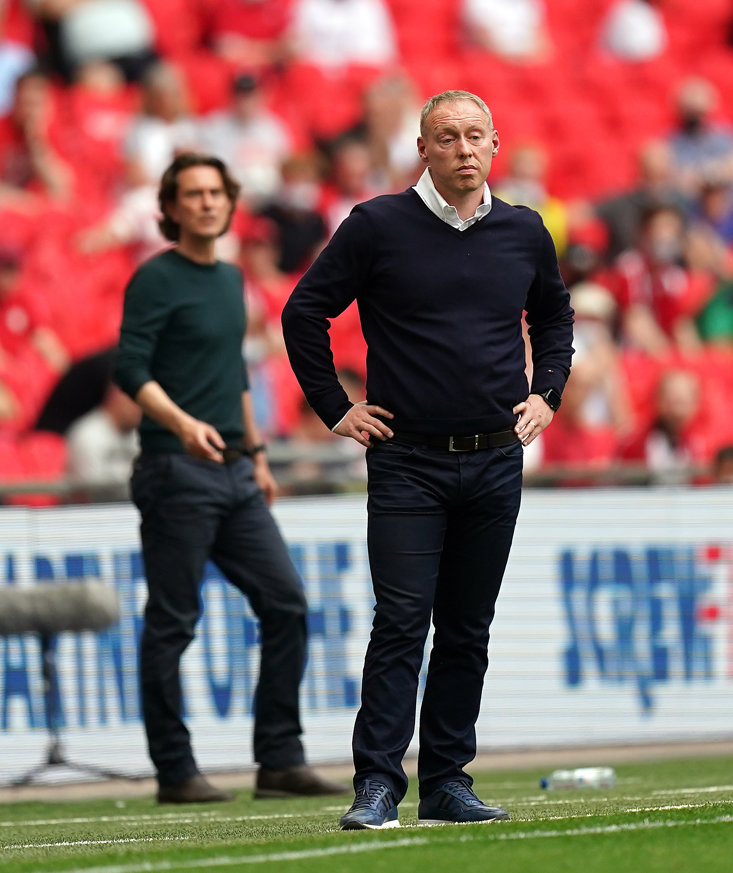 COOPER HAS DONE A TREMENDOUS JOB AT THE LIBERTY STADIUM

For the second season running, the Swans have fallen at the play-off stage, and will take zero comfort from the fact that they made it one step further than last season, when they were defeated 3-2 on aggregate by the very side that shattered their dreams today.

Ten years on from their last play-off triumph over Reading, there is reason for optimism in south Wales, with Cooper building a side ready to challenge again next season.

One cause for concern may be the future of club top scorer Ayew, with his contract expiring this summer. His incredible solo effort at Barnsley took his tally for the season to 17, and his goals will be a miss should the Ghanaian decide to give it another crack at the big time.

Marc Guehi has been a revelation since joining the Swans on loan from Chelsea, and having just triggered a contract extension at Stamford Bridge, you’d have to imagine both the player and club would be open to another loan.

That plays into Swansea’s hands given how successful his stay in Wales has been so far. His Man of the Match performances in both legs of the play-off semi-finals were hugely influential in the Welsh outfit reaching the final in London.

It might not feel like it after today’s disappointment, but the future remains bright for Swansea and their fans.

The goals and assists of Conor Hourihane looked like they may fire the Swans into the automatic promotion places after his loan arrival from Aston Villa. It wasn’t to be, but with his path to the first team looking difficult under Dean Smith, the Republic of Ireland international may be open to an extended stay at the Liberty Stadium.

Connor Roberts clearly loves playing for his boyhood club and captain Matt Grimes, with Premier League experience already under his belt, has made no secret of his admiration for his current employers and their loyal following.

The silver lining for Swansea fans? They are an outfit moulded into a certain way of playing, as opposed to a side that relies on standout quality from a small handful of players.

Wembley defeat will hurt, but the job that manager Cooper has done is a miraculous one, and you can bet that he will have his side competing at the top end of the Championship once again next season.