St Johnstone clinched only the second piece of major silverware in their history on Sunday with a 1-0 win over Livingston in the Betfred Cup final at Hampden Park.

Shaun Rooney’s wonderful first-half header was all that separated the two sides, but the Saints were worthy winners as Callum Davidson collected his first major honour as a manager having out-thought his opposite number David Martindale.

Martindale confounded many with his team selection, starting with skipper Marvin Bartley in the left-sided attacking midfield position rather than his more natural holding role in the hope of dealing with the threat of the rampaging Rooney. But the change backfired, as Bartley made little headway and St Johnstone came up with all the game’s key moments.

Livingston did have the best attempt of the opening stages when Josh Mullin found space just outside the area to have a clean crack at goal, but Zander Clark did well to beat the effort away.

It was to be Rooney who would provide the vital moment of the match though, meeting Craig Conway’s 31st-minute corner from the right with a fantastic header which evaded Robby McCrorie at the near post. While it was a decent delivery from Conway, Rooney still had so much to do to get an effort in, but his movement bought him half a yard on John Guthrie and the power he managed to get into the header ensured that McCrorie had little chance in keeping it out. 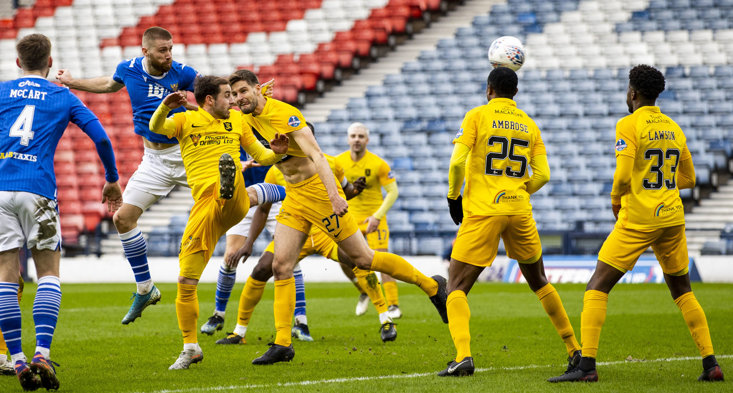 After that, the Saints had even greater reason to throw their bodies on the line, and that’s exactly what Callum Booth did when stretching to keep out a Mullin shot shortly before the break to keep his side on top.

St Johnstone could easily have had a second soon after half-time when Conway made great progress down the right and pulled back for David Wotherspoon, but McCrorie did well to keep out the effort and the loose ball just came back too quickly for Chris Kane to turn home.

Livi pushed hard for an equaliser in the last 20 minutes as they had little to lose in throwing bodies forward, but the Saints always looked likely to hold on.

"I'm over the moon, I can't hide the emotion," said match-winner Rooney to Premier Sports after the match. "We knew what Livi are all about, they played for seconds and try to get in behind you but we hung in and got the win.

"Obviously it's massive for absolutely everybody in Perth so there'll be quite a party going on tonight."

The Betfred Cup win is the second major trophy success in St Johnstone’s history, with the 2014 Scottish Cup having been their only previous national silverware triumph.