Football
News
Kilmarnock will face Dundee for their place in the top flight...
Simon Lillicrap
14:21, 16 May 2021

Ross County are guaranteed to play in the Scottish Premiership next season after they came from behind against Motherwell to secure the 2-1 win they needed to guarantee survival. Instead it is Kilmarnock who will play Dundee in a play-off for their place in the SPL, despite winning 2-0 at bottom club Hamilton. Despite a dominant performance it wasn’t enough for Tommy Wright’s side to avoid the play-off on an intense final day, and their 28-year stint in the top flight looks under threat.

Things looked bleak for John Hughes’ side as Sam Foley put the hosts ahead at Fir Park in the opening ten minutes and with County still 1-0 down at half-time and looking unthreatening, something special was needed. The pressure would have mounted further in the dressing room once they checked the scores and realised that Mitchell Pinnock had hit a brace to put Kilmarnock 2-0 up at Hamilton. As it stood at half-time, Ross County were destined for the play-off.

However, in times of crisis, it is the big players who need to stand up and be counted. Up against his former club, Iain Vigurs began a passing move from deep and then struck a wonderful left-footed equaliser from the edge of the Motherwell box to bring the scores level, and in doing so lift his side out of the bottom two.

The second-half performance was unrecognisable from the first and things got even better as Michael Gardyne, who has been at the club since 2015, got on the end of a well-weighted through ball and finished at the near post. For all the anxiety in the first half, the Staggies played like a side full of confidence to turn this game around and secure their spot in the top flight.

"It just shows how the football gods play out, with two goals from guys who have given so much to this club. Iain Vigurs scored a fantastic goal and Michael Gardyne was cool and composed." 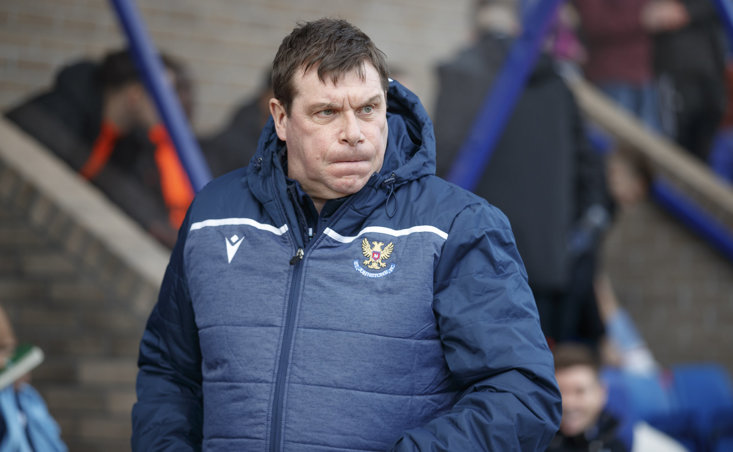 Kilmarnock’s second half was a tepid affair, with all attention understandably on Fir Park, but Pinnock did miss a second-half spot-kick and the chance to secure a hat-trick on the final day. Now, they will face a Dundee side who finished second in the Championship, as they came through their semi-final with Raith Rovers on Wednesday.

Killy manager Tommy Wright told the BBC: "For Ross County to get three wins on the bounce at this stage of the season, you've got to hand it to them.

"I can't ask any more from my players. When I came in I thought 36 points would have been enough. Unfortunately, it isn't.

"But we can take this performance and the performances in the last 10 games into the play-off."

Hamilton Academical’s relegation was mathematically confirmed with their defeat, while Hearts will replace them and play top flight football once again after they won the Championship at a canter.