It’s rarely been as important to stay both physically and mentally healthy but finding the right instructor can be tricky. We live in a world where social media is flooded with self-proclaimed ‘fitness gurus’ and finding the real deal can prove a tricky task. So we’ve done the searching for you. Enter Ross Edgley...

For the unacquainted, Edgley is a world record-holding British adventurer, ultra-marathon swimmer, expert in mental and physical fortitude, YouTuber and author. Some CV!

His popularity also means he has 140,000 subscribers on YouTube, 690,000 followers over on Instagram, two best-selling books and even an appearance on Joe Rogan, that left the host gobsmacked by Edgley’s achievements. Here are three such feats that prove Edgley is the fitness guru we all need in our lives right now... 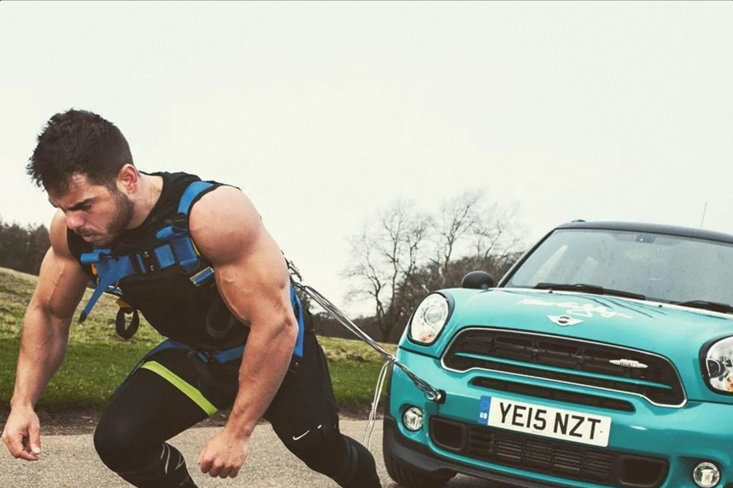 Thinking of signing up for a marathon any time soon? Whether that be your first or your one hundredth, chances are you won’t be running it whilst pulling MINI Countryman behind you. Well, that’s exactly what Edgley did on January 22, 2016 around Silverstone racetrack.

Setting off at midnight in an event dubbed ‘The World’s Strongest Marathon,’ Edgley successfully managed to drag a 1,400kg car alongside him for a full 26.2 miles, completing the endeavour in 19 hours, 36 minutes and 43 seconds, raising money for Teenage Cancer Trust, Children With Cancer, Sports Aid and United Through Sport. Incredible.

If a strongman-centric marathon isn’t your cup of tea, how does swimming the entire length of Britain suit you? Between June and November, Edgley accomplished such a feat back in 2018, swimming in total for 157 days across a whopping 1,792 miles of water.

He had to eat 15,000 calories a day and had consumed 550 bananas by mid-October. When he finished this exceedingly gruelling challenge, his tongue had essentially dissolved thanks to the saltwater, the rubbing of his wetsuit gave him something called “rhino neck” and his feet entirely lost their arches, turning a deep purple and yellow colour. Yikes! 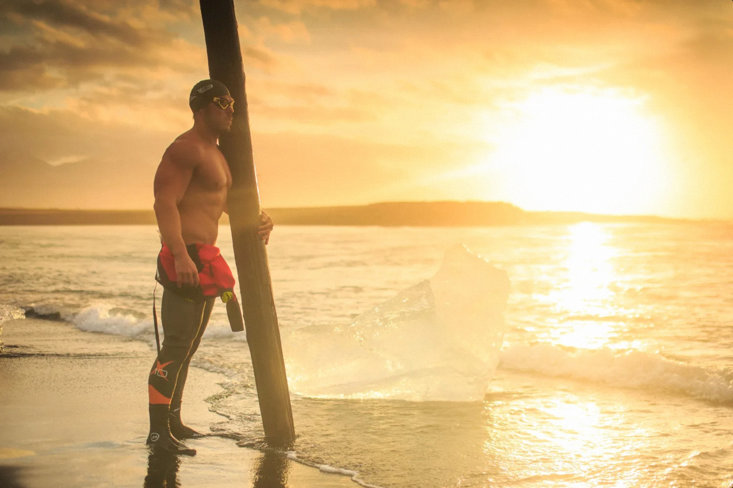 Pulled a car for the entire distance of a marathon? Check. Swam the entire coast of Britain? Check. Climbed a rope to match the height of Mount Everest? Incredibly, check again.

In 2016, again raising thousands for the Teenage Cancer Trust, Edgley decided to embark on ‘The World’s Longest Rope Climb,’ in which he completed a rope climb of 29,029 feet, the exact height of the highest mountain on Planet Earth, in just under 24 hours.

Speaking afterwards, he said, "For me, this was the logical sequel to The World’s Strongest Marathon. Pulling a 1.4 tonne car for 26.2 miles raised lots of money for charity, but it also left me with this newly acquired work capacity. A few hours in the weights room or pounding the pavement no longer seemed as fun. So I rang the Teenage Cancer Trust. Bought a rope. Found a tree. Then put a date in the diary."

x
Suggested Searches:
Manchester United
Liverpool
Manchester City
Marcus Rashford
Premier League
More
sports
The Hulk To ‘The Mountain’, Five Monster Moments From The World’s...
Since its debut in 1977, The World’s Strongest Man has become a beloved spectacle to hundreds [ ... ]
sports
From Indy 500 To Giro d’Italia, Here Are Five Sport Stories...
It’s been a busy weekend in the sporting world and whilst most of the talk might have been around [ ... ]
sports
Mickelson, Serena And The Sporting Legends Who Turned Back Time...
Sport has always been a young person’s game. For years we have been blown away by the talents [ ... ]
sports
FA Cup, Champions League And UFC 262: Your Weekend Of Unmissable...
With indoor meetings of up to six people permitted from Monday, pubs being allowed to partially open [ ... ]
sports
Five Things You Probably Didn't Know About The Tony Hawk's Pro...
For a number of millennials, few athletes encapsulate their childhood as the skateboarder [ ... ]
sports
The Year Of The Fox: How The Sporting City Of Leicester Emerged...
In 2012, the greatest thing to happen to the city of Leicester was that the remains of King Richard [ ... ]
sports
No Passion, No Point: Eddie Hearn's Podcast Returns For Third...
He’s now as popular, big, and perhaps as bombastic as the boxers he promotes. Eddie Hearn is also [ ... ]
sports
With 100 Days To Go, Team GB Are Already Set For A Historic...
With 100 days until the delayed Tokyo Olympics, Team GB look set to make history before they have even [ ... ]
sports
Ranking The Best And Worst April Fool's Day Pranks From The...
So another April Fool’s Day has come to an end and as the sun sets on what for some jokers is [ ... ]
sports
The Good, The Bad And The Downright Ugly, What Happens When...
Italian giants Inter Milan have revealed a brand new club badge ahead of the Nerazzurri’s 113th [ ... ]
sports
Ahead Of Hendry Vs White, Here Are The Sporting Rivalries We’d...
As Stephen Hendry and Jimmy White are all set to rekindle their famous old snooker rivalry having been [ ... ]
sports
From Bruno Vs Tyson To Last Chance U: Five Must-See Sports Documentaries...
Rejoice! The end of lockdown is nearly in sight. Sadly, there’s still plenty of time until things [ ... ]
sports
From Eddie Hearn To Jamie Carragher, Here Are Five Must-Reads...
It’s the first Thursday of March and that can only mean one thing: It’s World Book Day. [ ... ]
sports
Amateur Sport To Be Allowed In England From 29 March
Outdoor grassroots sports will return in England from 29 March, prime minister Boris Johnson confirmed [ ... ]
sports
Brady's Bromance, Nadal's City Of Love And The Greatest Love...
Roses are Red,  Violets are Blue, We live for sport, And we know you do, too! Valentine’s [ ... ]
sports
Messi Reaches Goal Number 650 At Barca, Five Weekend Stories...
Lionel Messi continued to boggle the mind with the 650th goal of his Barcelona career, Patrick Reed [ ... ]
sports
The Socially Distant Sports Bar Is Like Being In The Pub With...
The day will come. We’ll be back. The beloved British pub will fling its doors wide open once [ ... ]
sports
The Six-Day Plan That Can Turn You Into A Hollywood Hardman...
Is there an actor who represents the quintessential British hardman better than Jason Statham? Probably [ ... ]
sports
It’s Mahomes vs Brady At The Super Bowl, Five Sport Stories...
In a weekend which saw UFC 257 and the FA Cup grabbing a lot of attention, there was plenty of other [ ... ]
sports
Daniel Craig's Full-Body Bond Workout That Will Turn You Into...
The release of No Time To Die is a bittersweet one. On the one hand, after months of Covid-induced delay, [ ... ]
sports
The Super-Quick Routine Jason Mamoa Used To Get Ready For Aquaman
Is Jason Mamoa the coolest actor in the world? Maybe. The Guinness swigging, axe-hurling Hawaiian actor [ ... ]
sports
Max Holloway Is A UFC Record-Breaker, Five Weekend Stories You...
All the attention might have been on the anti-climax that was Liverpool vs Manchester United this weekend, [ ... ]
sports
From Fernando to Maradona, These Are Five Of The Best Sports...
Yep, back again. Nope, not out and about, meeting up with our mates or heading to the football but instead [ ... ]
sports
The Five Key Moves Cavill Uses To Get In Supernatural Shape...
Netflix’s TV series adaptation of The Witcher proved to be one of the most popular shows to land [ ... ]
sports
Work Out Like A WWE Superstar With John Cena’s Five-Day Training...
He’s widely regarded as one of the greatest professional wrestlers of all-time, has nearly 15 [ ... ]
sports
Conquer Those New Year Resolutions With These Five Fantastic...
During the first quarter of 2020 fitness apps were downloaded a staggering 593million times. Factor [ ... ]
sports
Work Out Like Hollywood’s Hardest Worker, Mark Wahlberg, With...
Mark Wahlberg hits the big 5-0 this year, and in those five decades the man from Boston, Massachusetts [ ... ]
sports
Why The History Channel’s Arctic Edition Of Alone Is Unmissable...
There have been a plethora of crazy TV series in recent years, take The World’s Toughest Race  [ ... ]
sports
Cheeky Chappie Jimmy Bullard’s Fishing Pod Is A Remarkably Down...
Fishing is one the sports that has seemingly proven immune to COVID-19 restrictions. You’re (usually) [ ... ]
sports
The Women’s Six Nations, Eubank Jr And Trump Are The Weekend's...
We may all be stuck inside but sport is continuing for now, which means some things may have slipped [ ... ]