Football
News
Dack is back after an injury nightmare to forget
Neil Goulding
06:55, 27 Mar 2022

Bradley Dack might just have timed his Blackburn return to perfection.

Rovers’ talismanic midfielder has had an injury nightmare to forget, but after two anterior cruciate ligament operations, which could have ended his career, Dack is back. And the ambitious 28-year-old is hungry to help Rovers try and win promotion to the promised land.

Rovers have been flying this season and, despite a recent dip in form, are still well-placed to challenge for a fairytale return to the Premier League. They sit favourably in sixth spot in the Championship and, while their automatic promotion hopes have taken a hit in recent weeks with just three wins from 11 league matches, the Lancashire club are still targeting a play-off berth as a minimum requirement.

Chilean striker Ben Brereton Diaz has been finding the back of the net for fun this season with 20 goals. But Diaz is nursing an ankle injury and Dack has the chance to impress as he nears his first first-team start for a year.

Dack has mustered just 17 appearances for Rovers since his last first-team start against Brentford on 21 March last season. However, he returned to first-team training in December, has played a few times for the club’s Under-23 side and played 96 minutes across Rovers’ last three matches, used sparingly as he regains his match fitness.

“There’s been a lot of hard work over the last year, a lot of ups and downs,” admitted Dack.

“I feel I’ve done enough over the last few weeks in training and in the Under-23s games to get a place in the squad.

“Coming back the first time was a special time, but there was always something missing without the fans there with me.

“The feeling I miss the most is scoring goals in front of the fans.

“It’ll make me more emotionally involved in the game. I miss playing, of course I do, but there’s no feeling like scoring a goal, especially in front of supporters.” 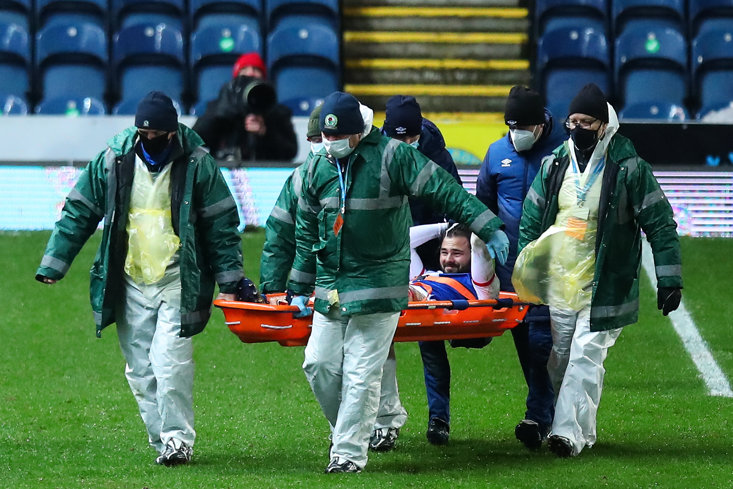 Dack, whose fiancé is the celebrity Olivia Atwood, starred alongside his future wife in a 2020 TV series ‘Olivia Meets Her Match’ while he was injured. But it’s back to the serious business of getting results on the pitch as Rovers look to emulate their memorable 1995 promotion to the Premier League.

“He’s fit now, he’s been knocking on my door for two or three weeks telling me he’s fit.”

Dack first minutes back for Rovers was as a late substitute against Bristol City earlier this month. And with leading scorer Brereton – who had scored all four of Rovers penalties this season – missing with injury, Dack took the spot-kick and missed.

But Mowbray stressed: “Bradley is a talismanic player for this club, everyone respects him hugely.

“We’re all delighted he’s back to a level of fitness that can hopefully help our team.

“I have told him that he probably needs a pre-season to get a six-week blast of real fitness under his belt and then be ready for the start of next season.

“He feels as though he’s ready, he’s really confident

“For me the bigger picture for Dack is that he’s playing football again. In the next few weeks he has to get himself into a situation where he can be starting on the teamsheet.

“That’s something I have to assess as we go along.”

Dack’s first ACL injury was frustrating enough, but his second has cost him a year of his previously blossoming career. There was plenty of chatter the playmaker would earn himself a lucrative Premier League move, similar to Adam Armstrong, his former teammate – and the club’s top-scorer – last season, when he signed for Southampton.

“There’s no need to rush and risk him because his career is more important than us winning a football match," added Mowbray.

“The fans might not think that, but I, as his manager, believe that he’s got another seven or eight years of his career, four or five or six of those years could be in the Premier League.

“We have to look after Bradley. This team have achieved what they’ve achieved this season without him kicking a ball. When he’s ready, he’ll be ready.”