Horse Racing
News
It was another incredible day at Royal Ascot as Frankie Dettori and Inspiral put in a monster performance
Kieran Spratt
18:28, 17 Jun 2022

The penultimate day of Royal Ascot was an absolute sizzler - and not just because of the glorious weather.

Betfred spokesman Matt Hulmes said, “After a pair of score draws and a narrow victory yesterday, it was a fantastic Friday for the punters as both temperatures and liabilities soared.

“The pair of Group one winners, Perfect Power and Inspiral, were both well backed favourites and Heredia’s Sandringham success was the icing on the Punters’ cake. The champagne was definitely on us!”

Here’s a run down of all of day four’s action, including another monumental victory for Frankie Dettori.

Meditate looked positively zen as she romped home with a clear-cut victory for Ryan Moore and Aiden O’Brian in the day four opener, maintaining her unbeaten record. The filly was too strong for the pre-race favourite Mawj, winning by a length and three quarters. 66-1 shot Ivory Madonna did incredibly well to finish third.

Perfect Power finished in style to claim victory in the Group One Commonwealth Cup. Jockey Christophe Soumillon had to overcome an unfavourable draw in stall one and found himself with work to do but he steered the Richard Fahey star home on the far side of the track. Flaming Rib and Flotus finished second and third respectively, with Cadamosto fourth. 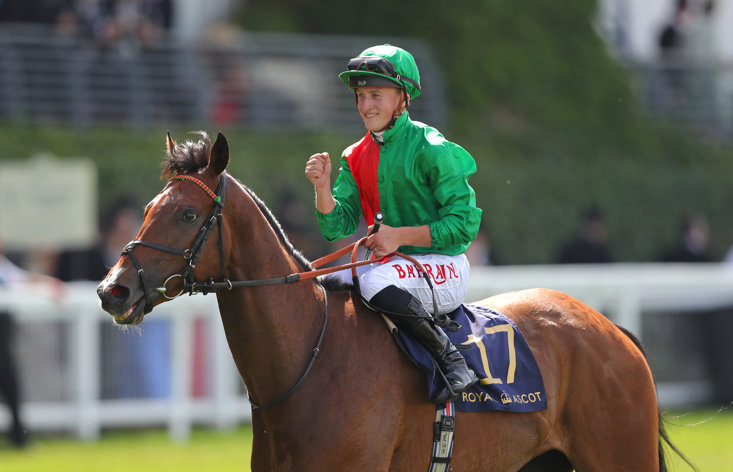 Candleford won the Duke Of Edinburgh Stakes at 11/2 by six lengths as Tom Marquand destroyed the rest of the field for William Haggas. It was another disappointing race for Her Majesty the Queen as Ryan Moore failed to get going on pre-race favourite Just Fine.

Inspiral put in a stunning performance in the Coronation Stakes as Frankie Dettori silenced his critics after a difficult week at Royal Ascot. That keeps the 2yo filly unbeaten with five wins out of five and the pre-race confidence the punters put in this magnificent horse paid off.

Dettori once again found himself in the midfield for the majority of the race, but unlike on Reach For The Moon and Stradivarius yesterday, this time he found the space to break clear. He mounted a perfectly timed charge over the final two furlongs to pull away from Spendarella, who finished in second and secured a comfortable win. Discoveries secured a third place finish after a photo finish.

In a busy field of 28, 7/2 favourite Heredia gave jockey Sean Levey’s his first Royal Ascot win. The Richard Hannon filly’s win was subject to a stewards’ inquiry after Heredia and Zanbaq came very close at the line, but the places remained unaltered.

Changingoftheguard gave Aidan O’Brien his 80th Royal Ascot win. It was heartbreak for Grand Alliance who looked like he was getting there until the final furlong where some superb riding from Ryan Moore saw him pick up his fifth winner of the week.

Latin Lover gave Harry Eustace his first Royal Ascot winner and Hayley Turner her third. A whole host of horses were in with a chance as the field approached the line, but Turner rode magnificently to get ahead and cross first, wrapping up a sensational day of racing.