Horse Racing
News
There were some big winners on day one at Ascot
Simon Lillicrap
18:47, 14 Jun 2022

It was a thrilling first day at Royal Ascot which saw Australia’s Nature Champ in the King’s Stand Stakes, while Coroebus lived up to his billing as the pre-race favourite in the St James’ Palace Stakes. Day one has certainly produced the goods, and here is what happened in Berkshire.

The William Haggas star has drawn comparisons to the great Frankel and showed why he’s the highest rated horse in the world, dominating his rivals to make it eight wins in a row and four Group Ones out of four. Jockey Jim Crowley barely had to lift a finger as his charge (⅙ fav) finished three lengths clear.

Jocky Hollie Doyle became the most successful female rider at Royal Ascot with victory on Bradsell in the Coventry Stakes.

The Archie Watson-trained juvenile was an 8/1 chance, but under Doyle he was given every chance, and dealt with the challenge of Royal Scotsman to take an impressive win.

Australian star Nature Strip (9/4) continued his phenomenal run of form as James McDonald cantered to a huge win in the King’s Stand Stakes at Royal Ascot. This race was billed to be a face off between the Aussie and American pre-race favourite Golden Pal, but there was only ever one horse in the running as Nature Strip streaked away from the rest of the field in style.

He’d won 20 of his 37 races Down Under and came to Royal Ascot on the back of a wide margin success in Group 1 company at Randwick. But now he has made his name on one of the most famous racetracks in the world and boosted his career earnings to over £10m. 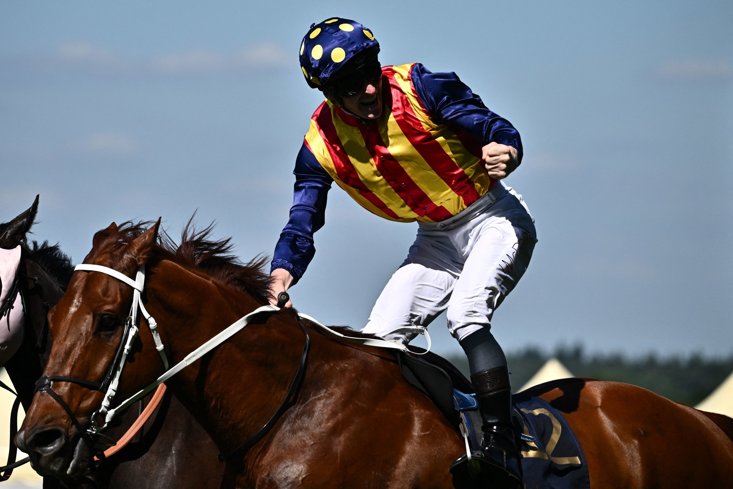 Odds on favourite Coroebus came through a difficult test to win the St James’s Palace Stakes and add it to the 2000 Guineas he won early in the year. With William Buick on board, the 10/11 shot was caught up in midfield traffic for a large portion of the race, but found his way through before holding off several fast finishers.

Callum Hutchinson got his very first Royal Ascot winner as Coltrane put in an outstanding display to cross the finishing post first, ahead of the pre-race favourite Bring On The Night.

"Words can't describe this feeling, this horse is an absolute dream to ride.”  I can't thank the boss enough. I've ridden six winners from 17 rides for him. Hopefully this winner can just give me a kick and I can keep progressing.”

There was a 20/1 winner in the Wolferton Stakes after a wonderful ride. Dubai Future put in a remarkable display to canter away from the field and win by three lengths, leaving pre-race favourite Cadillac to settle for second place.

Daniel Tudhope bagged his second winner on the opening day as on board 16/1 shot Get Shirt, he held off the pre-race favourite to take the win. He, in a few words, said,"[Get Shirty] is a grand horse, a lovely horse, it's great."