It was a Grand Final filled with star names. James Graham, Paul Wellens and James Roby were among the St Helens stars the Leeds Rhinos were charged with stopping, while Saints had the likes of Danny McGuire, Jamie Peacock and Brent Webb to contend with. The 2011 Super League showpiece promised plenty, and while few would be able to tell you the result off the top of their heads there’s nobody who couldn’t recall the majesty of Rob Burrow’s sensational try.

It wasn’t the matchwinner. It didn’t even give Leeds a winning lead. But what it did do was sum up the wonder of Grand Final night as well as the sheer brilliance of Burrow.

On a typically wet night in Manchester the Old Trafford pitch was so sodden that the pre-match entertainment was cancelled, and conditions were such that the early stages were punctuated by aquaplaning tackles, handling errors caused by the slippery ball and understated footwork as a result of the unpredictable surface. It was neither the first nor the last Grand Final to become something of an arm wrestle early in the contest, with safety first the order of the day.

Unsurprisingly, it was the boot which had the main say in the first half. Jamie Foster put Saints ahead with a penalty, Kevin Sinfield struck back to level. At 2-2, we were back to square one. Nothing in it. With the two sides largely remaining cautious, the good money was on tries being hard to come by and it would clearly take something special to break this one open.

The little half-back wasn’t starting many games in those days. With Sinfield switched into the halves for much of the 2011 season, Burrow had been reduced to making an impact off the bench as a hooker primarily. And he was being asked to do the same on the big night in Manchester at a time when both defences looked to have all the answers to any of the questions the conditions were allowing.

But Burrow came up with something magical. Taking Danny Buderus’ dummy-half pass on halfway, the little number seven stepped off his left foot and darted towards a gap in the Saints line. As Scott Moore and Tony Puletua converged, he impudently ducked the challengers and burst between their outstretched arms. Angling his run to the left and drawing Wellens, Burrow then stepped brilliantly onto the full-back’s left and back inside to escape one last desperate cover tackle on his way to the line. 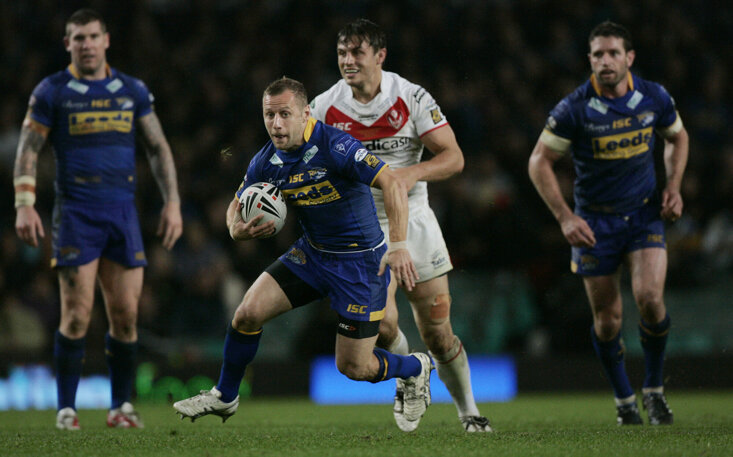 It was absolutely magnificent in and of itself, but to be able to put on such a display of footwork in those sorts of conditions really was something else.

He’d put Leeds 8-2 to the good, but that was far from enough. Indeed, by midway through the second half the Rhinos trailed 16-8. Tommy Makinson and Michael Shenton had both found their way over the line, and having gone down to three previous defeats in Grand Finals against Leeds, Saints finally looked like they were going to get the better of their old adversaries.

Brent Webb scrambled over to make it 16-14 and another Sinfield penalty levelled the scores with 13 minutes to play. From there, Burrow took over again.

Picking the ball up at acting half, Burrow made a lateral run to the left, shook off one tackle and burst through the gap which appeared on Saints’ right. With Francis Meli covering, the Rhinos superstar had the presence of mind to double-pump a dummy in the direction of winger Ryan Hall, and when Meli fell for it hook, line and sinker, Burrow had clear space ahead. After pulling in Roby, he eventually timed the perfect pass for Hall to fly in at the corner. Leeds had a lead they would keep this time, and Burrow had again been the wonderful architect.

With St Helens becoming desperate, Carl Ablett and Zak Hardaker scored further tries to give the scoreline a lopsided look at 32-16, but a tight contest had been turned by two pieces of absolute class by the same superb Rob Burrow.

The clear Man of the Match, this became known as the Rob Burrow Final long before his health battle added a further sheen of poignancy to his sensational performance. That wonderful first-half try and the genius of his game-winning assist will forever be remembered as the pocket dynamo’s crowning moments on a night he could barely have scripted himself.