Every sports fan can pick out a memorable piece of sporting commentary. “They think it’s all over.” “And Solskjaer has won it.” “Aguerrooooooo.” “By the barest of margins.” The great moments can often be accompanied by the most stunning of soundtracks, and rugby league has had its own standouts over the years.

Eddie Waring’s simple description of Don Fox as a “poor lad” after his Challenge Cup-deciding missed conversion in 1968 summed up the moment perfectly, while in the modern age there was Henderson Gill’s “bit of a boogie” after scoring for Great Britain against Australia in 1988 and Ray French’s commentary of Martin Offiah’s wonderful solo effort in the 1994 Challenge Cup final: “That is one sensational try.”

The single most repeated of the Super League era belongs to former Sky Sports game caller Eddie Hemmings, with the player whose name has become synonymous not actually getting on the scoresheet. The ‘Wide to West’ try of 2000 was absolutely spectacular, but the words themselves are every bit as memorable as the action itself.

Over the preceding 79 minutes St Helens and Bradford Bulls had put on the latest in a stunning run of high-intensity tussles between the two clubs around the turn of the century. With Saints having finished second and the visitors third, the pair were battling it out for the right to reach the major semi-final. The losers would get another chance but would need to negotiate an extra round to make it to the Grand Final.

And it was the Bulls who had an 11-10 advantage going into the closing seconds at Knowsley Road. They’d scored first, Jamie Peacock bursting through after Brad Mackay’s interception breakaway, but Kevin Iro’s inventive over-the-shoulder pass to Sean Hoppe had put the winger in for Saints and Tommy Martyn followed him over soon after to put the champions 10-4 up. Yet just as the home side looked to have taken the upper hand, Leon Pryce took a high bomb and sprinted the length of the field to level the scores. Henry Paul’s 75th-minute drop goal looked set to give Bradford the final say.

When Dwayne West was bundled into touch with 22 seconds left, Bradford’s travelling army celebrated, but a penalty was given to Saints. They were still 85 yards away from the Bulls’ line though, so the jubilation in the away end didn’t particularly die down. Paul Sculthorpe ran the ball in short and by the time he played the ball there were two seconds left until the final hooter. One tackle remaining. 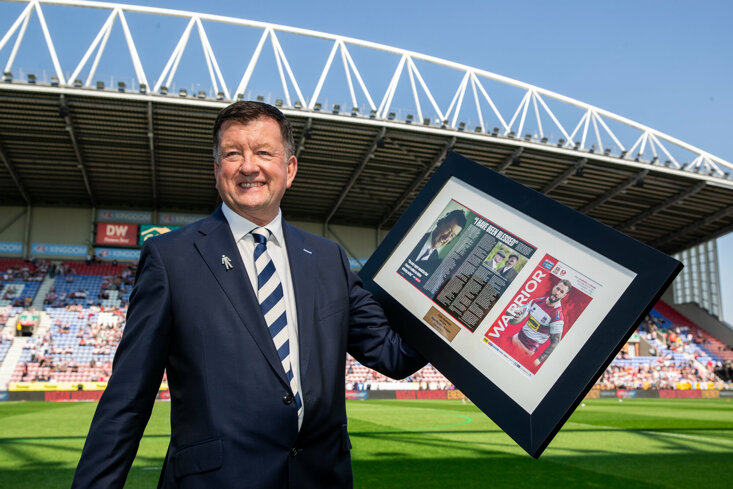 “This is the last play,” said Hemmings as Keiron Cunningham slung the ball from dummy half to Sean Long. The half-back chose to send an unorthodox lateral kick to the right wing…

“Long kicks it wide to Iro…”

The Kiwi centre fed the ball to his right for winger Steve Hall.

Saints’ play looked suitably desperate and the attacking line was scattered. They were backed into a corner.

“Hall is trapped, back it goes to Hoppe, over the shoulder to Hall…”

There finally appeared a little space for Saints to form something like an attack out of, but they remained 80 yards from the Bradford line.

“There is Jonkers, here is Long…”

Two passes later, the Saints playmaker upped the pace and began to run at the Bulls’ right edge. Was there actually a chance here?

He escapes a tired tackle from Hudson Smith and draws another defender.

Long’s pass sees the winger shrug off both the retreating Smith and Henry Paul as he heads for the halfway line with Bradford’s defence stretched. He draws Michael Withers before seeing Chris Joynt inside him.

“Dwayne West! Inside to Joynt…”

The Saints skipper has just too much in his legs for the covering James Lowes and punches the air on the way to the line.

A full 29 seconds after the hooter, Saints had scored a most extraordinary try and Hemmings had uttered words that a whole sport will cherish forever. Bradford coach Matthew Elliott collapsed in a devastated heap while his opposite number Ian Millward threw his hands in the air. Long had stolen the head of mascot St Bernard and was running a merry dance across the pitch. It was absolute mayhem.

There have been countless other great moments in 22 years of rugby league since the ’Wide to West’ try but it remains the most iconic passage of play in Betfred Super League history.