Rugby league has never been scared of innovation. It’s a sport that has become known for making changes, sometimes so regularly that fans can barely keep up with the alterations and what they mean for their teams. Some work, some don’t, but nobody could ever tell you that this is a sport that doesn’t try things.

One introduction that has been an undisputed success is the Super League Grand Final. Brought in for the first time in 1998, the season-ending spectacle takes place for the 25th time at Old Trafford on September 24. But that first edition back on a soaking wet night in Manchester stands out for its sense of occasion as the game made a huge move from the first-past-the-post system to the winner-takes-all season finale.

For the traditionalists this was the final the sport needed, since Wigan Warriors and Leeds Rhinos had finished one and two in the regular rounds. Twenty-five years on from the last play-off to decide a champion, this was going to take some getting used to for those coming out of their comfort zone. But seeing the best two teams in the northern hemisphere go head-to-head was a soft landing into the bright new world.

To begin with Leeds were pretty dominant. Iestyn Harris was continuing his wonderful trend of dictating the game from full-back, chiming into the line with precision timing. On one such occasion he waltzed through the Warriors defensive line and seemed destined to set up Adrian Morley for the opening try of the game but the slippery ball escaped from the Welshman’s hand just as he attempted to feed the second row.

But the Rhinos eventually made history with the first points of the Grand Final era when the excellent Richie Blackmore crashed over midway through the opening half. It was the least their play had deserved to that point, with Blackmore always looking dangerous on the right edge, but from thereon in Wigan simply stepped up their game.

Shortly before half-time Jason Robinson went on a trademark burst from dummy half and drove at the retreating Leeds defence. A jink and a step sent the flying winger through Darren Fleary’s tackle and Jamie Mathiou couldn’t make up the space to stop him. Even the covering Harris was helpless as Robinson flew over to tie the scores. Andy Farrell converted, and Wigan had a lead they would never relinquish. 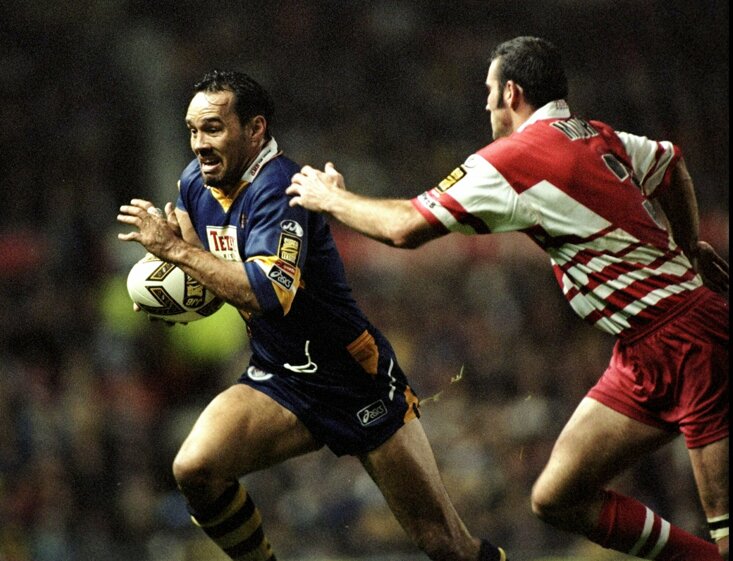 The Warriors skipper doubled the advantage with a penalty soon after the interval after Marc Glanville and Vince St Hilaire had been caught lying on in the tackle, and there was almost a two-score lead when winger Mark Bell went over but the first video refereeing decision in Grand Final history went the way of the Rhinos after the Australian was deemed to have spilled the ball into Harris en route to the ground.

Neither team were at their best with the ball in hand as the conditions only became more treacherous in the second half, but the intent from both sides was enterprising all the same. The tension rose, but so did the noise levels as opposing sets of fans sensed chances for their teams. Every run appeared likely to break a gap, every pass felt full of adventure, but somehow the 8-4 scoreline was unaltered until the dying moments.

The match was only settled when Graham Holroyd followed a dropped pass with a swinging arm on Bell. Farrell went for the two, and his successful kick from 40 metres was the final act of a compelling night’s action.

Wigan, the dominant force of the late eighties and early nineties, had their first title of the Super League era, while Leeds, two decades on from their last major trophy, were back among the big hitters in British rugby league once more. As for the sport, it had just found its new annual spectacle, with the biggest prize being reserved for the final night of the calendar. It’s hard to imagine rugby league without it now.