Facing the media as the clock ticked down to 80 days before England’s opening game against Samoa, Dutton repeated assurances of anticipated record-breaking ticket sales across the men’s, women’s and wheelchair tournaments. And he brimmed with confidence that the sport’s greatest players will all commit to playing in the sport’s greatest showpiece event.

“Absolutely,” Dutton told The Sportsman, when asked how confident he was that the biggest names in the NRL were all on board this year.

Their withdrawal 12 months ago - citing Covid safety fears - led to the collapse of the event. Dutton recently travelled Down Under to ensure that every light was green and returned home confident of delivering a trail-blazing tournament to capture the public’s imagination.

“We go back to Covid and the world of uncertainty that we have all lived in, we can never be complacent, but every NRL club that we met and every meeting we attended was incredibly positive and we have had a follow up which was incredibly helpful to us.”

Not only are the world’s top players now fully on board, the NRL quality is seeping through into the Pacific Island sides too. Samoa, Tonga, Papua New Guinea and Fiji are all expected to be stronger than ever before, with many top players in Australia’s elite league pledging to play for their countries of heritage.

“Just being at the games over there, being in the camp with four of the Pacific nations and being at those games was a celebration and pointed to the strength of those Pacific nations. We are going to welcome the world’s best athletes and I am 100% confident about that.” Dutton adds.

So with the strength of player pool no longer a concern, focus turns to bolstering ticket sales and creating noise around a tournament that Dutton hopes can catch fire in the way that the women’s Euros has grabbed the public’s imagination this summer.

“It’s just a tournament that feels special,” Dutton adds of the women’s football event that he has been attending as a supporter, and at which he has felt “palpable excitement”.

“We wouldn’t have had this in 2021. We are delighted to be amongst other events in 2022, and we have seen the positivity, optimism, and a family audience. We could see the audience adopting a nation and I think that’s similar to what we will experience.” 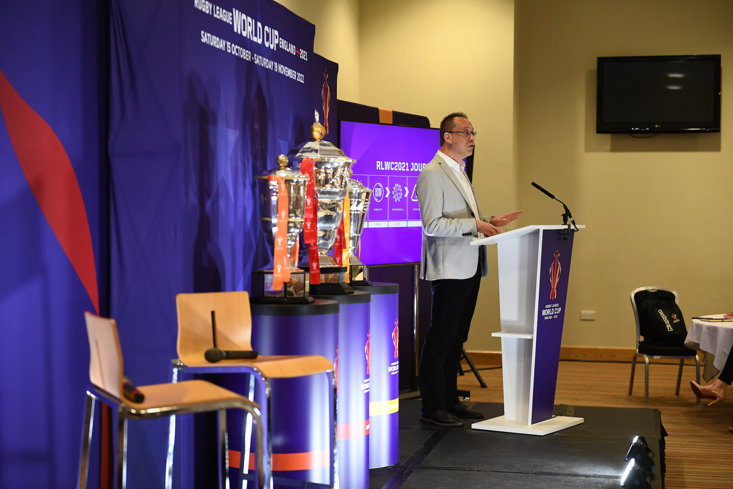 The creating noise issue is a more fundamental rugby league problem. Generally, the rugby league stories that rise to prominence nationally have always been the bad news stories. I have presented countless national radio shows on rugby league where the only real wider buy-in has come when mentioning rugby union, revealing scandals or controversies, or giving a spotlight to stories that transcend sport anyway.

It was no surprise that the biggest day of PR activity this tournament has had so far came when Nadine Dorries mistakenly illustrated her supposed love for league by referencing Jonny Wilkinson’s World Cup-winning drop goal.

The Sportsman asked Dutton if that was a frustration, but were met with a straight bat.

“We will continue to celebrate our own stories, we will take every opportunity to get this tournament far and wide and also the sport of rugby league, but we would prefer to concentrate on what we are doing right here and right now,” was his well-rehearsed riposte.

In truth it is tough for the organisers to criticise a government that has invested £25m of its money in the tournament, but the Dorries affair in particular could have been turned into a winner with a degree of humour around the farcical faux-pas as opposed to a collective head in the sand.

As for ticket sales, there is confidence of sell-outs for the England opener and the final, and it is fundamental to their strategy that they do.

This is a big ‘hold your nerve’ exercise now for organisers hopeful of a late rush of ticket sales off the back of the women’s Euros success and the forthcoming Commonwealth Games.

Between 35 to 40 games are expected to be shown on BBC1 and BBC2, and rather than that providing a reason for fans not to buy tickets, Dutton expects it to have the opposite effect. In short, UK viewers have watched the success of the Lionesses on terrestrial television and wanted a piece of it. The atmospheres have thus been electric.

Last year’s postponement prompted a refund window which saw 19% of tickets returned, but organisers are holding out hope for a frantic final six-week period which they hope will trigger a huge surge in demand. As such, 75% of the entire advertising budget is being held back for the final six weeks before the tournament starts.

Above anything, the Rugby League World Cup is being led by a fan who loves the game and would do anything to see it succeed. Last year’s postponement hit Dutton hard, and he admits he could have walked away then, citing financial losses incurred by the  postponement as in the “multiple millions of pounds” and personally a real hit to his mental health. He points to an impressive array of commercial partnerships that have “massively overachieved” expectations as a big reason for optimism.

As in any sport, the most effective way to sell out stadiums is to have a winning team.

England have a brand new kit and a squad keen to prove the doubters wrong. So, soon it will be over to Shaun Wane and his players to get those stadiums full.

“There is lots of positivity despite some of the challenges that people face in terms of disposable income” Dutton admits.

“So my rallying cry to everyone who are passionate about the sport is to get behind this, it is the biggest moment in 127 years in terms of tournament rugby league.”