Football
News
Pep Guardiola's side extended the gap between them and Liverpool to 13 points with a 3-0 win over Spurs
Elliott Bretland
19:32, 13 Feb 2021

It’s over, done, finito, surely? Only six-and-a-half months after Jordan Henderson lifted the Premier League trophy at Anfield, Liverpool’s title defence has come to an end after the Reds’ 3-1 defeat at Leicester coincided with Manchester City recording their 16th successive victory. Pep Guardiola’s side beat Tottenham 3-0 at the Etihad Stadium on Saturday evening to extend the gap between them and last season’s champions to 13 points.

Having finished top dogs for the first time in 30 years last season by seemingly hammering everyone in sight with ferocious counter-attacking, Liverpool supporters would have been supremely confident of Jurgen Klopp’s men going the distance again come May. However, it’s come to an end with a whimper.

Though they led 1-0 at Leicester, they succumbed to a 3-1 loss, letting in three goals between minute 78 and 85. The German manager admitted the league was gone and said, “Yes, I'm conceding. I don't think we can close the gap to City. We are not worrying about the title. We are not silly. We have a tough game on Tuesday and then again on Saturday we have the derby. These are the things we are thinking about and if we still want to have a good season, then we have to win.”

However, fans of the Merseyside club will believe, at least hope the team can somehow pull off a miracle, fewer fanbases have had optimism proven right so often. Keeping the faith though will have felt that much harder when Rodri slotted home a penalty to give City the advantage over Spurs in the first half. When Ilkay Gundogan rifled home his eighth Premier League goal of 2021 to double the hosts advantage, positive thoughts will have been near impossible. When the Germany international scored again for a brace, it was game over.

Ederson launched a long ball for the perfect assist for City’s third and was congratulated heartily. The Brazilian beamed with delight and punched the air. His team-mate’s smiles were just as wide for they know they’ve found their groove. Liverpool know better than anyone then when it clicks for a team and they start to steamroller as they did to Jose Mourinho’s Spurs, there is nothing you can do.

Mo Salah, Sadio Mane and Co, tore teams apart last season and developed a belief that they could not be stopped. The wins piled up and Liverpool were flying while opposition teams arrived at Anfield already with their tails between their legs. City this season, with free-scoring Gundogan, Phil Foden pulling the strings and Ruben Dias being a brick wall, are on a roll and just can’t be halted. 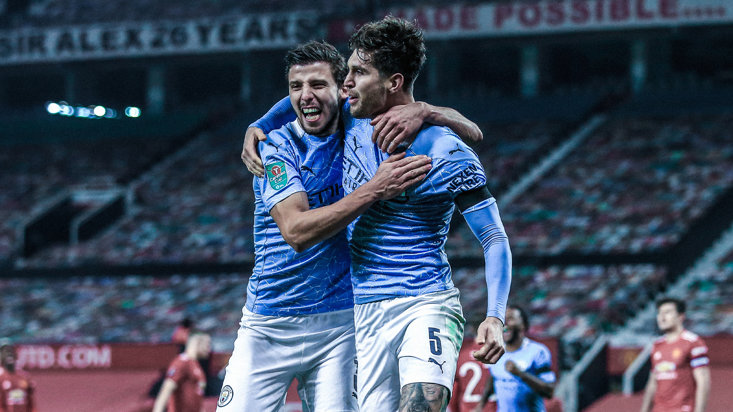 They are hungry for wins. Hurt from last season’s failure, they have been starved and come back with a vengeance. On Saturday, they hunted Tottenham in packs and forced them into errors. Spurs, for some reason, happily passed the ball around the back but as City mounted the pressure, they became sloppy and were caught out in an instant. The hosts grew into the game and were clinically lethal when they got the chance.

Liverpool, who recorded 99 points last term but have now lost six Premier League games already this campaign, know that the mountain they now have to climb is just too much now. City are at the summit and there is nothing they can do. It’s over and City made sure of it with style and aplomb.