For 45 minutes it appeared that Fulham’s survival bid might be injected with a second massive boost in the space of seven days. Following on from their 1-0 win at Liverpool last weekend, they were more than holding their own against Manchester City at Craven Cottage on Sunday.

Yet it took only 15 minutes after the break for City to record a three-goal blitz which further underlined the gap between themselves and the rest, laying the groundwork for a 3-0 win which puts them 17 points clear at the top of the Premier League. That’s 23 wins in 24 games now for Pep Guardiola’s side.

The City boss had experimented with his starting XI somewhat, going with a 3-4-3 featuring John Stones, Ruben Dias and Aymeric Laporte at the back with Sergio Aguero returning to the side for only his fourth league start of the season.

And while it took them a while to get going, that 15-minute spell at the start of the second half was just the latest reminder of how destructive they are when they shift into gear. In a campaign during which inconsistency has been the most consistent trait on display in the Premier League, City’s ability to make football look incredibly easy at times has been so out of keeping with the rest of what we’ve seen it is untrue. 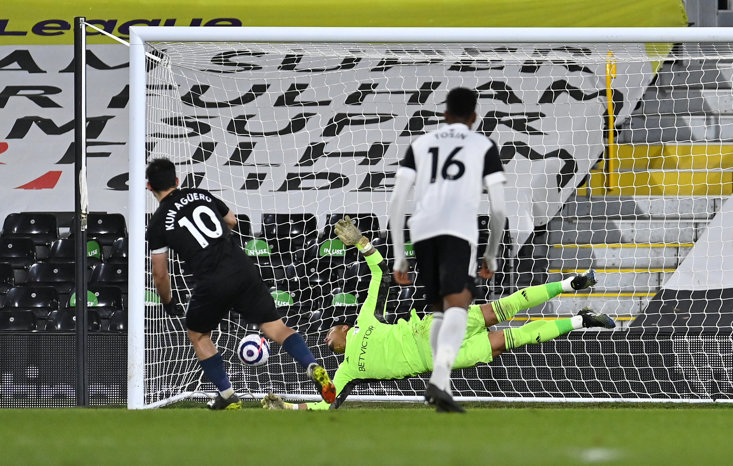 John Stones got the ball rolling on Sunday, volleying home from close range after Fulham pushed up in defence of a left-wing free-kick. The second came after Ivan Cavaleiro played a dangerous shot pass to Joachim Andersen, allowing Gabriel Jesus to pounce. The Brazilian picked up the ball, took it past Alphonse Areola and slammed home.

Aguero’s penalty, awarded after former City defender Tosin Adarabioyo brought down Ferran Torres, was simply the icing on the cake. The champions-elect had done their job and then some already.

We might well have been here a year ago with Liverpool, who led the rest by 25 points when the 2019-20 season was halted due to Covid-19 with nine rounds to go, but somehow this one feels a bit more permanent. City are streets ahead and are only pulling away further. They’re still in all three cup competitions, and need a maximum of 14 points from their last eight league games. If they want to go for everything, you feel they can win it all.

Maybe this wasn’t the greatest example of just how good they are. Whatever Fulham’s form since the turn of the year, City will come up against far more difficult tasks in the weeks and months ahead. But the fact that they stepped up for 15 minutes and blew away the opposition before going back to sticking their foot on the ball and commanding the nature of the match says everything about how they can be ruthless when they need to be and pragmatic when it doesn’t hurt.

You’ll get no better than 1/500 on Manchester City winning the Premier League this season. Betfred have already been paying out for more than a week. If you’ve got the spare cash, it should go on City winning the lot.