Boxing
News
'King Ry' has to get it right, starting this Saturday night against Javier Fortuna
Joey Mills
08:35, 16 Jul 2022

Ryan Garcia is making up for lost time. ‘King Ry’ did not fight for 16 months after his 2021 victory over Luke Campbell. His fight on Saturday night against Javier Fortuna will be his second bout in three months. Perceptions of the 23-year-old have changed vastly since his seventh-round TKO win over Campbell. At the time, that victory looked to be a stepping stone to better things for the youngster. So what happened? Why is Garcia shaping up for just his second fight in two and a half years?

The Fortuna bout was originally supposed to happen two years ago, before Garcia withdrew due to mental health issues. Speaking to Dan Rafael, Garcia recalled the moment he knew he had to take time away from the sport. Describing his preparation for the initial Fortuna fight, Garcia said, “When I got to the gym I just burst out crying for no reason in front of everybody and I ran out of the gym”. At this point Garcia was part of the Saul Alvarez camp, “Canelo, everybody was there and I was just trying to work out and I just couldn’t hold it in”.

It is worth saying that not all the responses to Garcia’s withdrawal were particularly kind or considerate of his state of mind. Boxing is still an inherently macho sport to many people, despite the important steps fighters like Tyson Fury have made in shining a light on mental health not to mention the wealth of incredible women’s boxers active today. Many chose to accuse Garcia of “bottling it” and questioned whether the former can’t-miss prospect had what it took to compete at the top of the sport.

Upon his return to the sport, Garcia lost an important ally. His relationship with ‘Canelo’ had always been a familial, sibling relationship. The undisputed super middleweight king had often been publicly critical of Ryan under the guise of helping him improve. These were not personal attacks so much as examples of tough love from a veteran pro trying to pull a protege up by the bootstraps. But when Garcia left trainer Eddie Reynoso, citing a lack of attention from the man who also coaches Alvarez, the lines of communication broke down.

The pair have exchanged barbs in interviews and on social media about the split. Garcia’s reputation has been damaged by his inability to let the issue lie and his digs at someone far higher up the boxing totem pole than himself. Critics have found him too focused on his beef with his former friend and not focused enough on his career between the ropes.

It doesn’t help that the lightweight division has gone from strength to strength in his absence. Teofimo Lopez’s shock loss to George Kambosos Jr was followed by Devin Haney’s star-making undisputed title win over the Australian. Meanwhile, Gervonta ‘Tank’ Davis continues to enthrall, having racked up three wins and two knockouts since Garcia beat Campbell. With Vasiliy Lomachenko still to return, Ryan Garcia simply hasn’t left a big enough hole in the division for anyone to miss his presence. 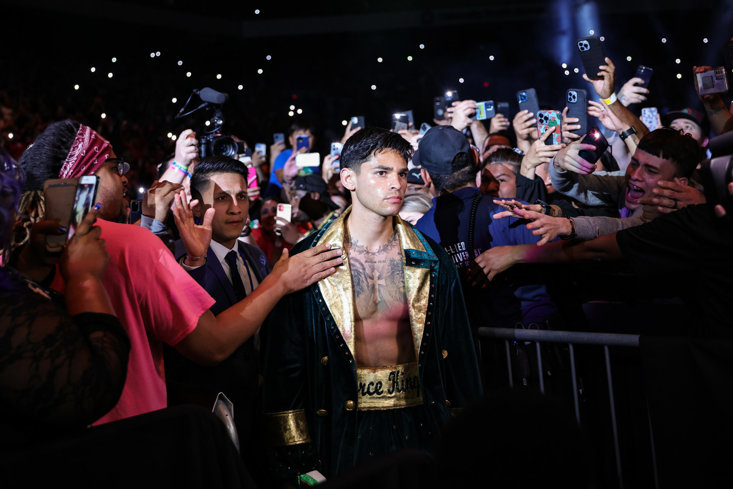 This could have been helped had he engaged in some bigger fights. While Campbell was a step in the right direction and his comeback fight against Emmanuel Tagoe was forgivable considering his long lay-off, Javier Fortuna just isn’t an opponent that sets the pulses racing. A secondary champion down at super featherweight, his three losses have all arrived when he has stepped up in class. There is a sense of unfinished business considering the fact this bout was scheduled before Garcia’s sabbatical. But Fortuna has lost since to Joseph Diaz and this fight just doesn’t have the sort of gloss needed to attract attention in such a stacked division.

If Garcia wins, and he is a heavy favourite to do so, then a big fight is paramount next time. Whether that is with Haney, ‘Tank’, a rebounding Kambosos or a returning Lomachenko. Garcia should be applauded for coming back from his mental health struggles. But if Garcia is to reach the level he believes his talents deserve, he must do so by fighting the best of the best. Saul Alvarez’s patience with him has run out. Garcia cannot risk the public’s doing the same.