A lot has happened in the nine years since I won the Grand National. I’ve retired, come back and started a family, but that day in 2013 on Aurora’s Encore will always live with me.

We went into the race in good form, but he hadn’t run well all season. He is a horse that really wants the sun on his back but leading up to the race we had six feet of snow drifts, so it wasn’t the greatest preparation, but the sun came out in the week before.

He was bouncing at home so we knew he was well, but we were honestly just going for the day out. We had a horse good enough to take his chance and was the bottom weight off just 10-3, rated 137 which wouldn’t even get into the race now.

We went in there to have a nice time and I had a plan in my head. I knew where I was going having walked the track and knew what line I wanted to take. When I walked out into the paddock, everyone looked nervous. I reassured them I had a plan and it’s not very often that you can stick to plan A, especially in a race like that, but you can watch it back and it’s exactly how I had it in my head.

I was exactly where I wanted to be, following the ones I wanted to follow and the race just unfolded right in front of me and the rest is genuinely a blur. I can’t honestly really remember what happened just after the line, it was all a bit manic and chaotic and like an outer body experience. It really was unbelievable stuff, and I was very lucky to be in a position to be able to do it.

The Grand National is a race unlike any other in the whole year and I can’t tell you the difference there is in the weighing room leading up to it. Jockeys in there that are always cool, calm and collected are suddenly hyper and chatty, while the usually chatty ones are in the corner quiet as mice and crapping themselves. It changes everybody. It’s the occasion, the build up and it has different effects on us all.

There is so many of you as well. 40 of us go out and have our photo taken and then you realise that it is serious. We get to the start and everyone is jostling and it is crazy and so tense. That is why it is the race it is built up to be. It’s the biggest race in the world and that filters down to the jockeys, the owners, the trainers and the horses and everyone gets a glimpse of those emotions in this amazing race. 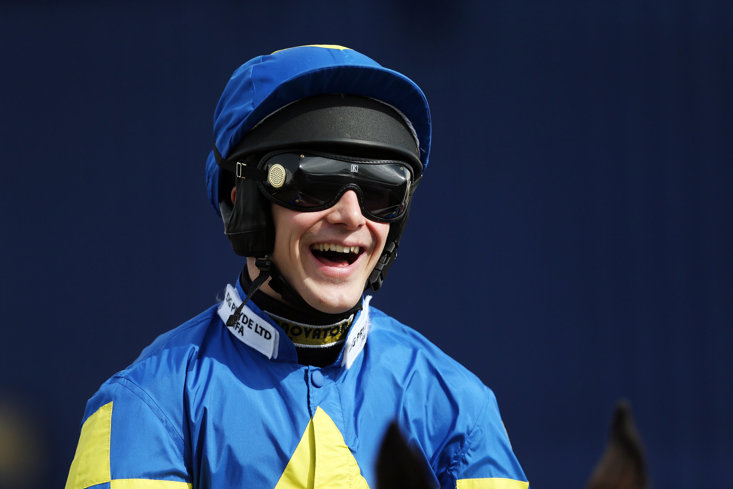 The start can be a problem. The paddock is the paddock and everyone gets used to plenty of people being around, but being at the start in the National it is different. You’re circling around and even if the crowd isn’t purposefully being loud, you can feel it and the atmosphere, the constant noise and drone and it puts everyone on edge. If the start was down the back straight it would be totally different and a lot more relaxed but the crowd element certainly makes things a lot more tense.

We get a lecture from the stewards before racing starts on Grand National day saying to ‘do this’ and ‘do that’ but I’ll be honest, by the time we reach the start we’ve all forgotten about it!

I often don’t try to get nervous and like to pretend I’m not, but this race does put you on edge a little bit. It is a big deal to be riding in it, let alone win it, so I do feel very lucky that I’ve done it and I am a little bit more relaxed now when I do go out and ride in it. I feel like I haven’t got anything to prove, but I wouldn’t mind winning it again, that would be nice.

It is slightly unrealistic to be talking about winning it again with Dingo Dollar but we must go out and enjoy it, focus on getting a clear round, looking after the horse and hopefully he can run a nice race.

I’ve noticed since coming back from retirement I have been able to take in what these big races mean. I’ve been lucky enough to have some nice winners since returning. I was only 23 when I won the National and you take things for granted at that age. You try and take it in, but it doesn’t sink in and you’ve got a different way of looking and appreciating life but it’s a different ball game now and would be a different buzz this time round to win it.

Someone asked me what it would mean to win it again, and I wasn’t sure how to answer. Because I’ve done it and obviously it would be the most amazing thing but I’ve had big winners since and started a family so it wouldn’t be the be all and end all, but it would be unbelievable. It’s the Grand National and everyone wants to win it. I would certainly appreciate it much more and to be able to share it with my wife and my kids and my whole family would be the best part.