Football
News
Despite an Ellen White hat-trick, Great Britain exit the competition at the quarter-final stage after defeat to Australia in a thriller
Conor Keane
12:53, 30 Jul 2021

Sam Kerr inspired Australia to the semi-finals of the Olympic football tournament after a 4-3 victory over Great Britain, handing them another quarter-final exit at the Olympics.

The Chelsea star scored twice in key points in the game, first to take the game to extra-time and the second to seal the victory for the Matildas. She was able to punish weak defending from Hege Riise’s side and Britain were also left to rue their missed chances even though star player Ellen White scored a hat-trick.

The first-half was quite cagey and Great Britain had the best of the chances but they could not make them count, while Australia were quite resilient in defence but looked dangerous when they did break forward.

Australia broke the deadlock late in the first-half with their first shot on target courtesy of Alanna Kennedy. The defender rose highest from a corner to glance the ball into the far corner.  It took Team GB a while to find their rhythm, but they managed to find an equaliser just before the hour mark as star striker White scored a phenomenal header which sparked Riise’s side into life.  The goal scorer will receive a lot of the plaudits, but it was a sensational cross from Lauren Hemp who put the chance on a plate for the Manchester City forward.

Team GB almost endured an immediate setback after an Australian chance forced them into a lucky escape, but minutes later White fired in her second to put her side in front for the first time in the game.

The game opened up after that and there were many breaks down each end as the Aussies felt the game slipping away from them. In the dying minutes, they were looking for someone to stand up and it was Chelsea talisman Kerr who pulled her side level at the death after some soft defending from Team GB, which gave her plenty of time to smash the ball into the back of the net and take the game to extra-time.

Team GB
@TeamGB
End of the road for our women's football team.
They exit the competition at the quarter-final stage after defeat to Australia in a dramatic game.
#TeamGB 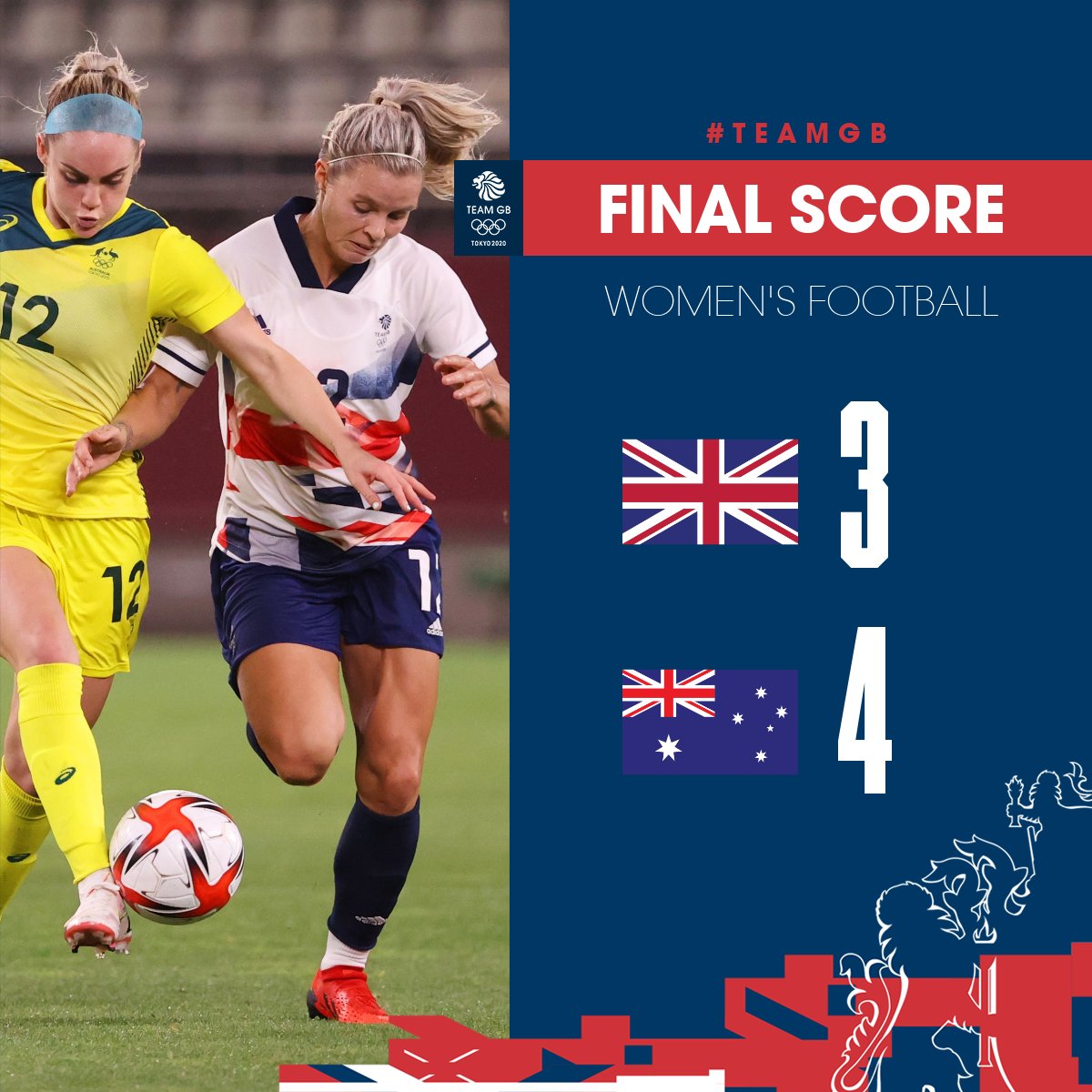 Team GB had a great opportunity to regain their lead after Nikita Parris was fouled in the penalty area, but Caroline Weir’s penalty was saved and Team GB were immediately punished for it. Australia went up the other end and scored to put them ahead for the second time in the match.

The ball found its way to Mary Fowler and her left-footed effort took a deflection off Lucy Bronze and sailed into the top-right corner. Kerr scored her second and Australia’s fourth at the start of the second-half of extra-time to all but end Team GB’s medal hopes.

White, however, had other ideas and sealed her hat-trick to give Britain a lifeline to try and take the game to penalties. That goal meant she had scored six out of the seven goals that Team GB had scored in the tournament.

It wasn’t to be though and it was history repeating itself as Team GB exited the Games at the quarter-final stage, just like they did in London nine years ago.