Football
News
The Australian combined with Beth England to keep the Blues at the top
Simon Lillicrap
11:15, 08 Mar 2021

The big guns in the Women’s Super League all won this weekend to keep the three-way title race alive, with Emma Hayes’ Chelsea side still leading the way by two points. They followed up their impressive 2-0 Champions League win over Atletico Madrid with an away victory over West Ham United. Unlike in that dramatic game in midweek, the Blues kept all 11 players on the pitch as they eased to a 2-0 win thanks to goals from Sam Kerr and Beth England.

England set up the Australian forward with a brilliant cross which allowed Kerr to nod in her 14th goal of the season, leaving her two behind the leader in the Golden Boot race, Arsenal’s Vivianne Miedema. The roles were reversed after the break following a huge long throw down the right which caught West Ham napping. Kerr, in behind the defence, crossed to the back post where England was waiting to double the away side’s lead.

Hayes’ side showed no sign of the pressure that had been heaped onto them by title rivals Manchester City an hour earlier, as the Citizens briefly went top of the league thanks to a late winner over Everton. With less than 10 minutes left on the clock it looked as if City had missed their opportunity before a brilliant finish from Keira Walsh gave them a 1-0 win and kept their title hopes alive.

Everton had defended well, with City striker Ellen White unusually off colour, but it was Lauren Hemp who drove into the Toffees’ box before teeing up Walsh. From outside the area, she powerfully side-footed the ball into the far corner to spark massive celebrations from her teammates. They all clearly knew exactly how pivotal that goal could be at the end of the season. 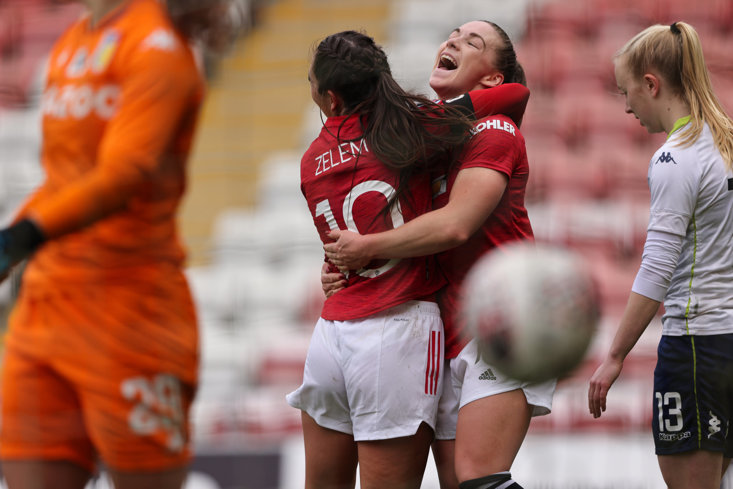 So Chelsea lead the way on 41 points, with City in second place on 39, but Manchester United in third will still feel they have a shot at overhauling the pair of them. They proved their worth after back-to-back league defeats with a convincing 3-0 win over Aston Villa which leaves them six points off the top.

A lackadaisical piece of defending handed United the opener as Kirsty Hanson pounced on a loose ball to crash the ball in off the crossbar via a deflection. Lucy Staniforth then whipped a delightful free-kick into the area for Jess Sigsworth to head home, before captain Katie Zelem added a third in the second half. It could have been more for the hosts, Hanson almost scored directly from a corner while Sigsworth also had a shot saved from close range. A 3-0 win will satisfy Casey Stoney, who will just be happy her team are back to winning ways in the league.

Elsewhere, Arsenal hotshot Miedema was on the scoresheet yet again as her side beat Birmingham 4-0. Caitlin Foord scored twice in three minutes in the first half to take the game away from the hosts and keep the Gunners’ hopes of a top-three finish alive. Arsenal are now six points behind United, with an all-important game in hand on their rivals. Inessa Kaagman scored twice as Brighton beat Tottenham 2-0, while tonight Bristol City host Reading with the home side needing three points to take them off the bottom of the table and out of the relegation zone.

x
Suggested Searches:
Tyson Fury
Manchester United
Marcus Rashford
Lewis Hamilton
F1
Air Jordan
More
football
Leeds Score Late Leveller To Deny Liverpool Top Four Spot
Leeds will have seemingly had more fans backing them than usual on Monday night when they hosted Liverpool [ ... ]
football
Gary Neville And Jamie Carragher Urge Fans To Come Together...
Jamie Carragher has urged football fans to come together to stop the proposed Super League which has [ ... ]
football
Women's Super League: Title Decider Heads Three Key Games In...
Right, enough of all that other nonsense, here’s a Super League we can all get behind. The WSL [ ... ]
football
Could Man Of The People Jurgen Klopp Leave Liverpool After Super...
Jurgen Klopp has always been a man of the people. Whether you love Liverpool or truly despise them, [ ... ]
football
Jose Mourinho Sacked By Tottenham: Three Key Moments That Led...
Jose Mourinho has been sacked by Tottenham Hotspur less than a week before the League Cup final. He [ ... ]
football
European Super League Explained: Here's Everything We Know So...
Competitive football as we know it is being stolen by the so-called ‘biggest’ clubs in Europe [ ... ]
football
Kelechi Iheanacho Fires Leicester Into FA Cup Final For First...
Kelechi Iheanacho continued his stunning form in front of goal to fire Leicester City into the FA Cup [ ... ]
football
Man United Leave It Late To Beat Burnley As Mason Greenwood...
Manchester United last beat Burnley at Old Trafford back in February 2015 heading into this one. And [ ... ]
football
Fulham Suffer Heartbreaking Blow As Arsenal Score 97th Minute...
Fulham were cruelly denied an historic victory and a massive three points as Arsenal scored an equaliser [ ... ]
football
Leicester FA Cup Triumph Can Offset Top Four Worries And Show...
Leicester are flagging badly but this weekend’s FA Cup semi-final against Southampton could be [ ... ]
football
Chelsea End Man City’s Quad Dreams And Reach Fourth FA Cup Final...
Manchester City’s unprecedented quadruple dream came crashing down on Saturday evening after they [ ... ]
football
Norwich City Seal Fourth Premier League Promotion In A Decade
The Canaries don’t even kick a ball until Saturday evening but thanks to Swansea City and Brentford’s [ ... ]
football
Newcastle United Move Nine Points Clear Of The Drop After Win...
Newcastle United took another step towards securing their safety in the Premier League with a 3-2 win [ ... ]
football
Championship Relegation Battle Analysed: Which Team Has The...
Coventry’s 1-0 at Rotherham on Thursday night felt monumental in the Championship and with Norwich [ ... ]
football
Harry Kane Scores Brace But Spurs Top Four Hopes Are Dented...
Harry Kane continued his glorious scoring form against Everton by netting a brace which put him ahead [ ... ]
football
Everton And Tottenham's Faint Top Four Hopes Dangling On Their...
The games have come thick and fast and now we’re entering the business end of the season where [ ... ]
football
Aidy Boothroyd Sacked: Frank Lampard ''Perfect'' For England...
Aidy Boothroyd has been dismissed as England U21 manager after seven years in the England set-up. After [ ... ]
football
Arsenal Cruise Into Europa League Semis With Commanding Win...
Arsenal cruised into the Europa League semi-finals thanks to a phenomenal first-half performance, beating [ ... ]
football
Manchester City's Quadruple Hopes Enter Decisive Eleven Days...
As Phil Foden rattled in the final goal off the Borussia Dortmund post, it was definitive. Manchester [ ... ]
football
Premier League Fixtures: Everything You Need To Know Ahead Of...
The Premier League is here though we have a fractured programme of fixtures owing to the semi-finals [ ... ]
football
Arsenal's Season Rests On The Europa League And Mikel Arteta...
The most important game of Mikel Arteta’s short managerial career? Quite possibly. The biggest [ ... ]
football
Hillsborough, April 15, 1989: Remembering One Of Football's...
On April 15 1989, a warm, sunny, spring afternoon, Sheffield Wednesday’s Hillsborough stadium [ ... ]
football
Quad Dream Remains Alive As Pep And Man City Advance To Champions...
Pep Guardiola reached his first Champions League semi-final with Manchester City after coming from behind [ ... ]
football
Manchester City Ready To End Champions League Quarters Curse...
If Manchester City are to win a historic and unfathomable quadruple this season, they must break their [ ... ]
football
Europa League Quarter-Finals: Everything You Need To Know Ahead...
The Europa League is reaching its final stages as we look forward to the second leg of the quarter-finals, [ ... ]
football
Breathtaking PSG v Bayern Munich Is Why The Champions League...
Utterly breathtaking. If the first leg was an absolute celebration of football the second leg more than [ ... ]
football
Manchester United, City, PSG… Where Could Harry Kane End Up...
Harry Kane has 217 goals in 329 games but still has no silverware to show for his stunning goalscoring [ ... ]
football
Chelsea's Time Is Now, Insists Thomas Tuchel Ahead Of Porto...
Chelsea manager Thomas Tuchel has urged his team not to ‘get lost in dreams, hopes and speeches’ [ ... ]
football
Ten Years Of The Women's Super League Proves Lightning Progress...
On the 13th April, 2011, a new era of women’s football began as the very first game of the Women’s [ ... ]
football
Brighton's Blue Monday Curse Continues But Point Against Everton...
Brighton’s Blue Monday curse continued at home to Everton as their failure to win in the Premier [ ... ]