Sam Mewis netted twice on her return from injury as Manchester City closed the gap on leaders Chelsea in the Women’s Super League with a 4-0 win away to Birmingham City on Sunday.

The USA World Cup winner, who picked up a knock while on international duty in January, headed home City’s first and then finished off a goalmouth scramble to double the lead shortly after the break as the Sky Blues made light work of Birmingham at St George’s Park.

Lauren Hemp added an extraordinary third as her attempted cross flew over Blues keeper Hannah Hampton and into the far corner of the net, with Hemp needing treatment following the challenge which came in as she crossed.

Caroline Weir then finished coolly to round out a victory which puts Gareth Taylor’s side within two points of champions Chelsea at the top of the WSL with seven games to play.

Arsenal also recorded a 4-0 away win, although for a long time it seemed as though they may be held by Aston Villa despite the one-sided nature of the contest. Villa keeper Lisa Weiss was in inspired form for much of the game, but once Vivienne Miedema had turned in Arsenal’s opener from Beth Mead’s cross on 58 minutes the Gunners made hay.

Jordan Nobbs poked home a rebound for their second goal, then Katie McCabe made it three with a spectacular 25-yard drive and Lisa Evans rounded out the scoring with a close-range header.

The result gets Arsenal back on track following back to back defeats against Manchester City and Chelsea, but they remain six points behind third-place Manchester United in the race for the final Champions League spot, albeit they do have a game in hand. 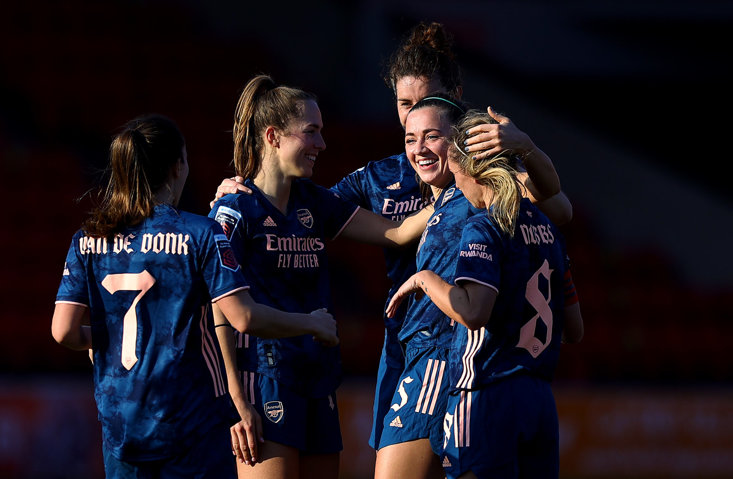 In Sunday’s other fixture, Tottenham came from two goals down against Everton but still conspired to lose the game at The Hive.

Valerie Gauvin netted two first-half penalties for the Toffees, but Spurs hit back thanks to an Angela Addison goal shortly before the break. Gemma Davison grabbed the equaliser early in the second half as hopes of a rally from the home side were given a real shot in the arm.

But within four minutes, Jill Scott – the England midfielder who last week made her 150th appearance for the Lionesses – headed home her first goal since returning to Everton on loan from Manchester City in January. The 34-year-old initially spent seven years with the Toffees from 2006 to 2013 before moving to City.

Everton remain four points behind Arsenal in fifth thanks to the win, with Spurs staying eighth.