Mikel Arteta's Arsenal put on a superb display in the Premier League curtain raiser with a 2-0 win over Crystal Palace at Selhurst Park. Top flight football was back with a bang.

The home fans provided an electric atmosphere while they also put on a spectacular tifo behind the goal as the players were welcomed onto the pitch. Martin Tyler’s “AND IT’S LIVE” welcomed the dawn of a new season, and it all felt comfortingly familiar.

There were however a few key differences on the pitch. Number one, Arsenal were good. No, like really good. Their first half performance was exciting, energetic and genuinely impressive. William Saliba made a strong debut at the heart of the Gunners defence after three years of loans, Martin Odegaard captained the side but the real change came in their two signings from Manchester City.

Gabriel Jesus was simply a joy to watch. Within five minute he had skinned a couple of Palace defenders before Gabriel Martinelli missed a sitter from close range. Meanwhile, Oleksandr Zinchenko changed the way they played from left-back. He’s so comfortable on the ball in any situation and he can pick the right pass at the right time.

The opening goal didn’t come as a surprise, but the way it came about was. From a corner, Zinchenko crept into the box, won a free header and placed it across goal for Martinelli to head home. He put that early miss behind him to score the first Premier League goal of the season and we had lift off.

Palace improved in the closing stages of the half as Joachim Anderson won a header at the back post and played in to Odsonne Edouard who should have scored from close range, but saw his header saved by Aaron Ramsdale. With Gareth Southgate watching on from the stands, the England goalkeeper had a steady display.

The Sportsman
@TheSportsman
🔴🇧🇷 The first goal of the 2022/23 season goes to Gabriel Martinelli!
#CRYARS | @GoonerViews 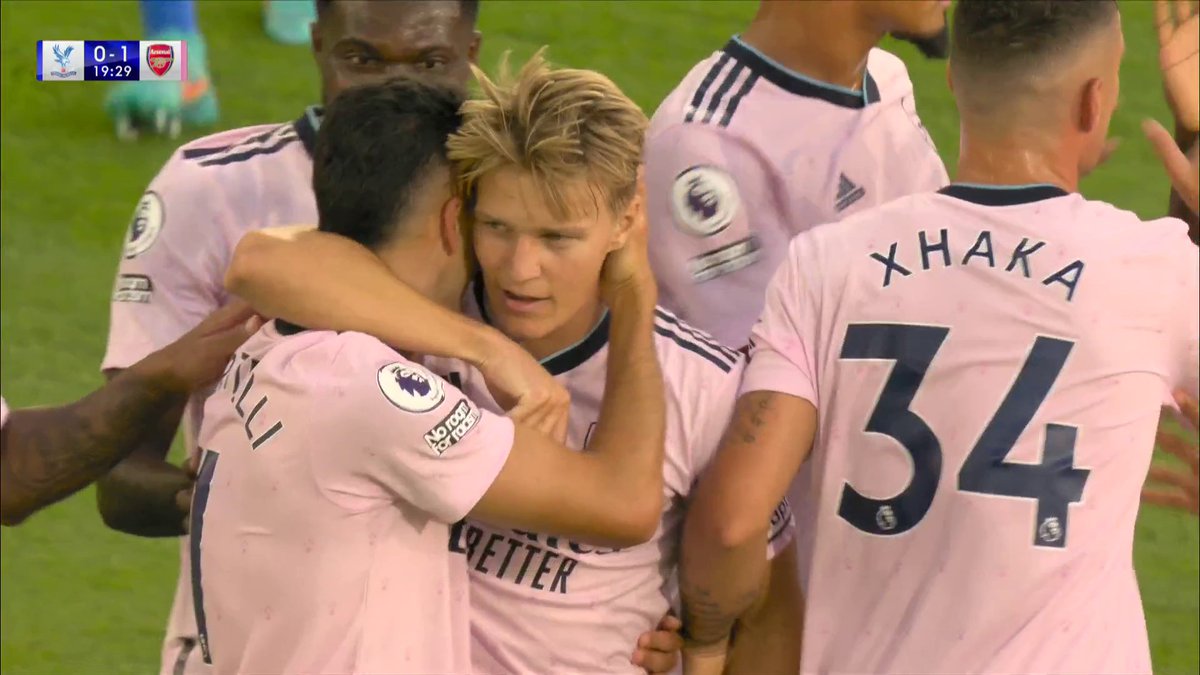 Another refreshing change was from the man in the middle. Anthony Taylor implemented the new rules as we saw some brilliant refereeing when play was allowed to continue and then Granit Xhaka was booked for diving. If this is what we are going to see this season, it should make for better football matches.

Palace started with much more intent in the second half as the Selhurst Park crowd got up for it and they should have equalised when Ebere Eze was played clean through. He had all the time in the world but placed his shot right at Ramsdale, to the home crowd's frustration.

Jesus bullied Guehi to set up Odegaard but he fluffed his chance as he tried to find a pass. The home side were on top but Arsenal still had the quality to create chances on the break. Palace were pressing but late on, they were made to pay. Bukayo Saka found space on the right wing and shifted the ball onto his right foot before whipping it towards goal, where Marc Guehi turned into his own net.

The second half was tough, but this is where the new-look Arsenal shone. We know they have the attacking quality in the form of Saka and co, but for them to defend resolutely and bag a clean sheet in this atmosphere, shows how much they have progressed. Against Brentford on the opening weekend last year they crumbled, but this time they rose to the challenge.

Saliba was superb, Ben White dealt with Wilfried Zaha at right-back and the new additions have clearly improved the Gunners. The same old Premier League we know and love is back, and this new-look Arsenal look like they have grown over the summer.