There's a wide range to choose from this Saturday, with Aintree, Doncaster and Wincanton hosting attractive meetings.

BEAKSTOWN has not been seen since finishing fifth in the Novice Handicap Chase at the 2020 Cheltenham Festival. He finished behind a pair of subsequent Grade 2 winners in Imperial Aura and Galvin and now returns from a 606-day break off a 6lb higher mark. The Skeltons are good at getting them fit at home so that won’t be an issue and he looks very well treated in this contest.

Lots of punters will latch on Your Darling after his easy win at Huntingdon but that is the third time he has won first time out and none of his other efforts match up. He must be taken on until he can prove he can string consistent runs together.

AINSDALE was only beaten five lengths in the Group 1 Champions Sprint at Ascot three weeks ago and prior to that had been performing consistently well in group company. He has his sights lowered into listed level this afternoon and Karl Burke has also reached for the visor just to aid his concentration. His form figures on ground soft or worse read 1412114 and he looks a solid each-way proposition this afternoon and has all the credentials to come home in front.

King’s Lynn was just ahead of AINSDALE at Ascot at the beginning of last month but doesn’t win as often as his ability suggests he should and has to give 3lb to the selection here, while the unexposed Tarhib is very interesting and a market move for him should be heeded.

The first race of the year over the famous Grand National fences, where Midlands National hero Time To Get Up for the connections of JP McManus and Jonjo O’Neill will be the attention on many. His last two starts, though, were all about stamina and the drop in trip to 2m 5f may be against him.

Hogan’s Height won this race in 2019 and is just 4lb higher. He ran over hurdle at Newton Abbot last month and that run should have put the 10yo spot on for a repeat victory.SENIOR CITIZEN, despite his name is only an 8yo and will be having his third run over the famous fences. He was only eighth on his first attempt in this race last year but improved upon that when third in the Topham Trophy in April and will be cherry ripe after a winning reappearance at Market Rasen three weeks ago. 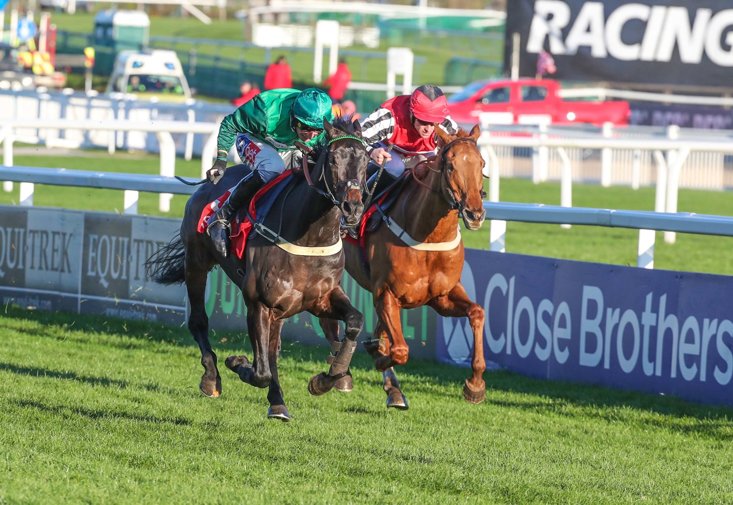 SCEAU ROYAL GOES IN THE 3.35 AT WINCANTON

The ultra-competitive November handicap is the last big prize of the flat turf season, and it can go to the lightly-weight FARHAN under Hollie Doyle.

He has finished runner-up in four of his last five starts, and despite the handicapper sticking him up a few pounds each time he still runs his race. He was a good second at Newmarket behind Siskany in the Old Rowley Mile and, despite just the one win form 10 starts, he is a solid operator who gets a valuable 5lb weight for age allowance.

Sam Cooke rates big danger after he finally hit the target in a decent handicap at York in August while Flyin’ Solo could bounce back after a break following back-to-back wins earlier in the season.

The banker of the day would have to be SCEAU ROYAL, who is bidding to land back-to-back renewals of the Elite Hurdle. Twelve months ago he landed the competitive Welsh Champion Hurdle on route to success in Somerset. This time he saw off Silver Steak at his happy hunting ground of Kempton three weeks ago to put him spot on for this assignment. He has run some fantastic races in top company and despite just falling agonisingly short in the best two-mile races, he is a standing dish at this level and should follow up.

The enigmatic, talented but frustrating Goshen is the biggest threat. He hacked up over course and distance in the Kingwell in February, but that was on his favoured soft ground and he blotted his copybook at both Cheltenham and Punchestown. He must go right-handed but on a quicker surface I expect SCEAU ROYAL to come out on top.

Belfast Banter rose through the ranks last year with handicap success at Cheltenham and Grade 1 victory at Aintree. He was well held in the Galway Hurdle but took a heavy fall at Listowel in September and needs a watching brief here.