The Midsummer highlight of the flat season is the King George VI & Queen Elizabeth Stakes with a clash of the generations at Ascot.

It features this year’s Irish Derby winner and Epsom Derby third, Westover, plus the Oaks runner-up and talking horse Emily Upjohn. They represent the classic generation, taking on the reigning Juddmonte winner Mishriff, Arc hero Torquator Tasso, Hardwicke scorer Broome and last year's Coronation Cup victor Pyledriver. All bar one are group one winners with over £17million in prize money earned between the sextet.

It’s a cracking contest despite the worryingly small field, and is one to savour rather than get involved as I don’t see an angle in.

There are bets to be had though at Ascot and elsewhere on a busy Saturday afternoon.

Nine fillies and mares lock horns at 2.25 for a Group 3 on the round mile.

Zanbaq has been made favourite on the back of her second at Royal Ascot but on a line through the winner there Heredia, she has work to do to get the better of OSCULA, who finished ahead of Heredia at Sandown a three weeks ago. She has run four solid races this season, a runner-up effort at Sandown following a listed success at Carlisle and her third at Chester a fortnight ago looks solid form, with the winner one of the fancies for the G2 Lennox Stakes at Goodwood next week.

Oscula has had plenty of runs but there is another wrong with her attitude and she looks worth a tilt at around 5/1 under William Buick.

Snooze N You Lose will ensure it has a decent gallop and go from the front, while the unexposed Kind Gesture is one to keep an eye on in the market after a ten-length romp at Windsor in novice company puts her in the ‘could be anything’ category.

York sprint handicaps are always devilishly difficult and all the usual suspects line up again.

Mondammej has acquitted himself well in pattern company this season including a good second last time here over the minimum trip to Royal Acclaim, the Nunthorpe favourite. Gale Force Maya and Silver Samurai are both dual winners this campaign, while Lucky Man was a close second in the 3yo sprint handicap here last month.

One horse whose consistency deserves to be rewarded is ABERAMA GOLD. Keith Dalgleish’s 5yo is yet to run a bad race here at York and that includes off higher marks. He was fifth in a pair of course and distance contests in May and has finished runner-up in his last two starts at Ayr - the latest of them came on Monday. He is a solid proposition to at least hit the frame and deserves to win a decent prize. 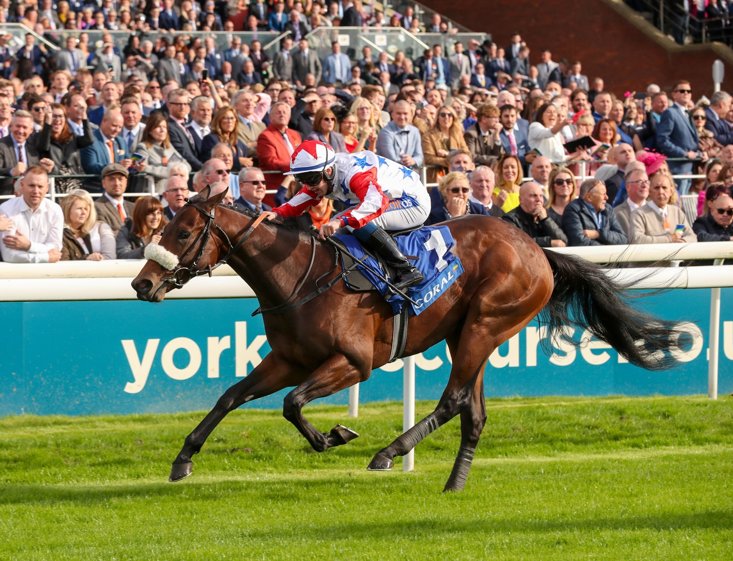 Jane Chapple-Hyam is having a great season with a pair of Royal Ascot winners and a runner-up from her three runners and Intellogent running a good third here at York in the ultra-competitive John Smith’s Cup at the last meeting.

Her season can get even better with one of those Royal winners CLAYMORE taken to land the Group 2 York Stakes. He burst onto the scene with an impressive Newmarket win at the back end of last season before chasing home Native Trail in the Craven on his return. Put a line through his French Guineas run as was drawn wide and rushed up on the outside to force the pace and he is better judged on his Ascot success when beating the Queen’s Reach For The Moon.

He made all there but doesn’t have to lead and track Dark Moon Rising if that one insists on frontrunning. He will need to see off last year's Champion Stakes runner-up Dubai Honour who drops down from Group 1 level after a fair effort at the Meydan carnival. He though may just need this outing and must give the selection 9lbs which may be the deciding factor.

The big betting heat of the day is the International stakes over seven furlongs. Bless Him did us a good turn a fortnight ago when landing the Bunbury Cup at 25/1 and he is still competitively weighted to run well and is in fact 3lb well in under his penalty. Just behind him there was Jumby who will land a big pot soon enough and has Hollie Doyle in the plate this time.

Jumby was a close third in the Wokingham and won his novice here as a juvenile so is respected, although continues to rise the handicap for those good efforts.

Dark Shift is four from six at Ascot and will be popular. He clearly loves it here and the 6lb rise for winning the Royal Hunt is less of a worry than the drop back to six furlongs for this type who likes to be delivered late.

I would love to see Bless Him go close in his follow up bid, but I will side with another horse with a similar running style in that he is a hold up specialist in these big field scenarios and that is CHIEFOFCHIEFS for Charlie Fellowes, with Irish Champion Colin Keane an eye-catching jockey booking.

Now, CHIEFOFCHIEFS has caught my eye on many occasions this season, including when fourth at the Royal meeting. A draw towards the stands side looks ideal and even his run when well beaten here in May can be forgiven as he finished full of running without ever getting the breaks. He does need luck in running but a slightly smaller field of twenty-two should help on that score and he is one that looks ripe for at least hitting the frame, and like Bless Him in the Bunbury Cup, it could be his time to shine having won the Silver Wokingham at Royal Ascot in 2020.