The Winter Festival at Newbury is one of the key meetings of the jumps season and an early target for many who will have their eyes on big prizes come the spring at Cheltenham and Aintree. The Coral Gold Cup (former Hennessy) usually proves bona fide Cheltenham Gold Cup and Grand National contenders, while the novice chases, the Long Distance Hurdle and Gerry Fielden Hurdle, are also races to note for the season ahead.

The clash between Nicky Henderson Champion Hurdle hopefuls Constitution Hill and Epatante will see fans flock to Newcastle, where they can also see RSA Chase winner L’Homme Presse in action on ground that maybe quick enough for him, but many of the others have a few questions to answer too, so we will leave that heat alone.

The Sir Peter O’Sullevan Memorial trophy has been won in 2018 and 2021 by Kapcorse in ‘The Voice of Racing’s’ silks and he will be a warm favourite to retain his crown for the in-form Paul Nicholls and Harry Cobden combination. He has only run once since (pulled up at Sandown in February) and has only been seen on a course five times since his 2018 success.

He's certainly been targeted at the race but I will side with DEMACHINE. Twelve months ago he ran in the Coral Gold Cup, finishing a fair fifth for Kerry Lee and is 2lb lower in a weaker race here. He was beaten just four lengths by Remastered at Ascot in the Reynoldstown last February when 2/1 favourite and has solid form claims. He is just 4lb higher than his easy victory at Uttoxeter in May.

The stable has struck form in recent weeks too, with three winners and four seconds from their last 12 runners. 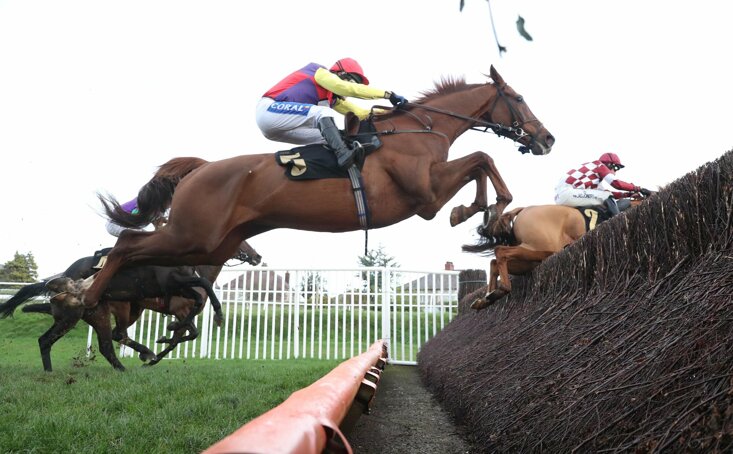 The Coral Gold Cup (Hennessy to most) is the season’s best staying handicap chase outside of the Grand National, with a fantastic roll of honour including the likes of Mill House, Arkle, Burrough Hill Lad, One Man and Denman amongst many other star names of the National Hunt game.

Although there doesn’t appear to be an obvious Cheltenham Gold Cup winner in this year’s line-up, REMASTERED must go close in my opinion for David Pipe and Tom Scudamore. He was looming menacingly and going best of all when coming to grief twelve months ago and is 4lb lower in his redemption bid.

Ten length second and fourth in two soft ground Haydock handicaps were solid efforts before he reverted to hurdles and was well beaten at Aintree in April. It was on Merseyside though that he reappeared again over hurdles last month and sauntered through the three miles to win very easily. That was his first start since a wind operation in the summer and the 9yo ticks plenty of boxes.

I will add an outsider to the staking plan too and it may just be worth giving LOSTINTRANSLATION another chance for a final hurrah. Although rising eleven, he looked to be the game's new superstar when winning the Betfair Chase at Haydock three years ago and was third in that year's Cheltenham Gold Cup. The wheels came off subsequently, but he won well on his return to action at Ascot last season when winning a grade 2. In fact, his record when returning from a break of 200 days or more reads 22131. He was rated 173 after that Haydock success in 2019 yet finds himself here very attractively weighted off a mark of 150 with Freddie Gingell claiming another 7lb. He will also get the decent ground that he is best upon, so all things considered, we have a high class horse off a low mark with favourable conditions at around 16/1.