WBO middleweight champion Savannah Marshall looks to extend her unbeaten record against Femke Hermans this Saturday night. The 2014 Commonwealth gold medalist meets her mandatory challenger knowing a victory would set her up for an undisputed title super-fight with Claressa Shields. As she enters the 12th fight of her pro career, ‘The Silent Assassin’ stands on the cusp of greatness.

The shadow of ‘The GWOAT’ looms large over this WBO championship fight. Shields is the WBC, WBA and IBF belt-holder, and clearly fancies a four-belt showdown with Marshall. The pair had to be separated in Cardiff last month, as a joint-interview in the wake of Shield’s win over Ema Kozin turned nasty. The American flaunted the fact she had won two Olympic gold medals to Marshall’s zero, while the Hartlepool-born star referenced the amateur fight between the pair that is a bone of much contention.

In 2012, Marshall inflicted the only defeat of Shields’ amateur or pro careers, beating her in an unpaid contest in the build-up to the 2012 Olympics. Shields feels she won, while Marshall feels the victory is proof of her superiority. Neither are willing to budge, and a fight between them has all the ingredients of a box office attraction. World class competitors, personal grudges and the crowning of one true champion collide to make this one of the best potential fights in boxing. But let’s not get ahead of ourselves.

First, Marshall must get past her mandatory challenger. Hermans has been unfairly sidelined in the build-up, as the talk has centred around Marshall fighting Shield next. Hermans is an underdog, and has won just one of her four previous world title fights. However she did beat former world champion Nikki Adler to win the WBA super middleweight title, and is riding a three-fight winning streak. She took Shields the distance in a 2018 title fight, and Marshall will be hoping to outdo her future foe and secure the stoppage. 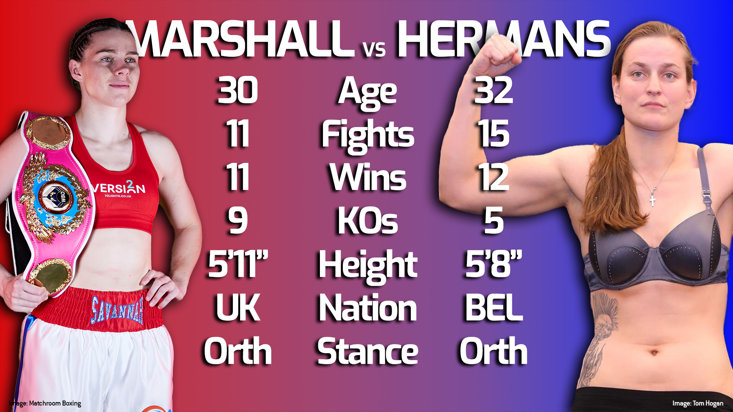 Britain’s world class female fighters are no strangers to a surprise upset. Terri Harper was stunned by Alycia Baumgardner’s spectacular knockout in November. But the American felt like a fighter on the rise, while recent title losses feel like an indication Hermans’ time at the top level is waning.

Marshall has knocked out nine of her 11 opponents, but will be conscious of the fact Hermans has never been stopped. The durable Belgian has never won outside of her home country though, losing in her two visits to America. The atmosphere at the Vertu Motors Arena in Newcastle will make for another difficult away day, and Marshall is the pick to take a late stoppage win.

In a way, this is the most important fight of Savannah Marshall’s career. If she wins, then she will move forward to fight Claressa Shields. That undisputed middleweight title battle will rival Katie Taylor’s upcoming super-fight with Amanda Serrano as the biggest women’s bout of the year. If Marshall loses, the road back will be long and arduous. ‘The GWOAT’ is the long-term target, but for now everything hinges on beating Femke Hermans.