A brace from substitute Lyndon Dykes and a goal from John McGinn capped off a well-drilled and commanding performance that will fill supporters with confidence for the remainder of the international break as they leapfrogged their opponents to go top of the group ahead of their two final Nations League fixtures.

Scotland skipper McGinn showed tremendous strength to hold off his defender and drill his effort into the bottom corner to send Hampden Park into ecstasy as the Scots delivered a much-needed performance after a bitterly disappointing summer.

McGinn’s influence in Clarke’s side cannot be understated. In 35 games under the manager, McGinn has been involved in 20 goals, scoring 14 of them. His role in this setup benefits both him and his teammates.

As for Dykes, he was able to make an instant impact after coming on from the bench, scoring from two corners put in by fellow substitute Ryan Fraser to see the hosts over the line and to give them a result reflective of their efforts.

Steve Clarke will be pleased with some of the football his side executed at times and that his side were able to come away with a good amount of goals that their performance deserved.

The transitional work with the ball throughout the thirds was promising. This Scotland performance was the polar opposite to that of which we saw of them in the summer when they last faced this evening’s visitors and before they got battered by the Republic of Ireland - who they face in the Nations League on Saturday.

After a scrappy start, both teams were tussling to get a foothold on proceedings. Both had decent opportunities breaking forward in the opening stages, but either were stopped by the offside flag or a lack of cutting edge. 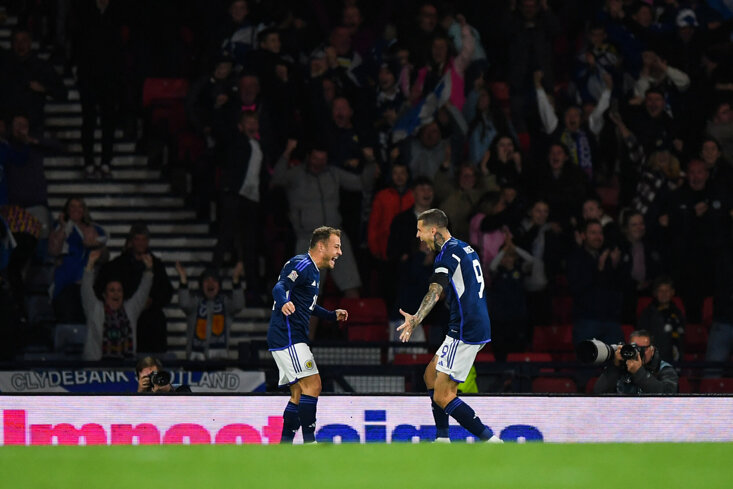 Scotland had a great chance to open the scoring when Ryan Christie fizzed in a low cross from the left but it was just too quick for Che Adams to get what seemed to be a goalscoring touch. The hosts were on the ascendency and they came close again when captain John McGinn saw a header fly just wide of the post.

They saw the opportunities Ukraine were giving them to whip crosses in from wide and it was Christie who had the next headed chance. He beat goalkeeper Anatoliy Trubin to the ball but he was under it too much and couldn’t help but watch it sail over the bar.

The Scots suffered a blow in the first half as Nathan Patterson was stretchered off with an injury, something that will concern both Scottish and Everton fans. Aaron Hickey replaced him and was tasked with nullifying the threat of Ukraine’s biggest threat Mykhaylo Mudryk.

Clarke’s men were the undoubted dominant side in the first period and they could have seen the visitors go down to 10 men when Che Adams was bodied by Valeriy Bondar after touching the ball past him, but he escaped with a yellow card.

Scotland’s intensity resumed in the second half. Stuart Armstrong tested Trubin as he met Kieran Tierney’s pull back but his shot was comfortably gathered. He had another great opportunity moments later as Scott McTominay’s neat backheel sent him through on goal but he blazed his shot over the bar.

It was Adams up next to have two brilliant chances as he saw two headers denied, first by the crossbar and then by the goalkeeper. It was hard to fathom how the game was still 0-0 at this point.

The breakthrough finally came when McGinn showed his strength and desire to fire his shot into the bottom corner before substitute Dykes came on to score two in the space of seven minutes from similar corner routines to wrap up the match.

If Clarke’s side continue to play like that for the remaining two fixtures, you would find it difficult to bet against them.