Aged 37 the former Celtic shot-stopper had the chance to extend his commendable 17-year run with the national team, but Marshall has revealed he has “no regrets” about finally calling time at the top level, one which started with his international debut in August 2004.

“It just felt like the right time to stop, if I’m being honest,” Marshall tells the Sportsman.

“I’ve had a long, long career, it’s crazy really when you think how long I played for the national team, but I’m not one for looking back.

“I’ve had a quality career and, playing for Scotland, has always been the pinnacle. It was always something I wanted to do growing up.

“There were no question marks about my fitness, or anything like that, for me it’s been about finding more of a balance in my life.

“You roughly spend 50-60 days a year away on international duty, but I wanted to spend more time with my family.

“And at the end of the day I didn’t want to get in the way of young keepers coming through.”

Ironically Craig Gordon, still going strong at the sprightly age of 39, is Scotland’s outright number one. But Marshall played more games in the final three years of his international career to understandably give hope to a longer stay at the top.

He was capped 47 times by Scotland, so those 20 caps in the last three years almost mirrored the 27 caps he made in his previous 14 years with the national set-up.

“When [manager] Steve Clarke came in he changed the team a lot – and he deserves a lot of credit for our success,” stressed Marshall, whose stunning spot-kick save from Alexandar Mitrovic against Serbia in Belgrade crowned an historic night for Scotland.

“It was an incredible night for so many reasons, I’m just so happy to have played a big part in us qualifying for the Euros.

“It’s obviously [an occasion] I will never forget, it was a wonderful night.

“And for me, now, it’s an exciting moment for Scotland. There’s a lot of exciting young players coming through, so hopefully they [Scotland] can carry on some of the momentum that has been built up.

“There’s lads playing at the top of the Premier League. Calvin Ramsay has just signed for Liverpool, then you’ve got the likes of talent including Lyndon Dykes, who has made a big impression, and someone like Che Adams.

“There’s a real conveyor belt of talent, which is great for Scotland going forward.” 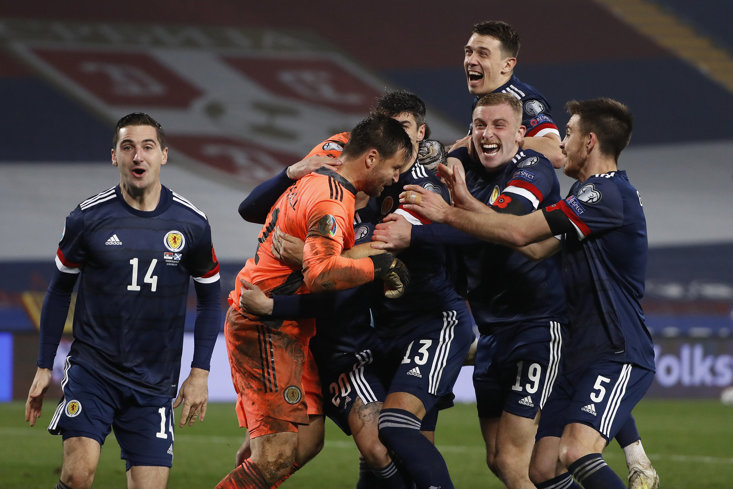 As a talented teenager at Celtic, Marshall kept a clean sheet in a famous 1-0 UEFA cup win over Barcelona. He also kept another clean sheet in the second leg at the Nou Camp to knock the Spanish giants out, and saved a Ronaldinho penalty against them in the Champions League the next season.

However, he will, perhaps, always be remembered as the The hero of Belgrade for his heroics for the Tartan Army.

But, even though he might have hung up his international gloves for good, the desire to be successful has not diminished.

Marshall signed a two-year deal to play for Hibernian this season – and he’s hopeful he can produce some of his trademark magic to help Hibs push Rangers and Celtic hard in the Scottish Premiership this season.

“Third [position] has to be the aim, I definitely think that’s achievable,” added Marshall.

“The club has had a crazy 12 months and last season the league position [8th] was not good enough.

“But there’s a new manager [Lee Johnson] now and the club have signed a lot of exciting new players.

“The quality has been good in pre-season, but we’re looking at third sport regardless.”

Following a productive pre-season in Portugal, Hibs started their season with a promising 5-0 demolition of Clyde in the League Cup last weekend.

And having won promotion to the Premier League with Cardiff and Hull City respectively, Marshall knows what’s needed to achieve success.

“Last season was a but frustrating for me because I had a hamstring injury and a few other niggles, but I’m really up for the challenge,” said Marshall.

“Hibs is a great club and hopefully I can play my part in a good season.”

Scotland lost one of its best-ever keepers last month when Andy Goram sadly died, aged 58, after a short battle with cancer. Goram made 260 appearances for the Gers between 1991-1998, won five league titles, three Scottish Cup and two League Cups.

And diehard Celtic fan Marshall admitted: “He was a great keeper, he’d break hearts in my house because he’d always stop Celtic winning.

“I didn’t know him personally, but he was a real Scottish great of the game.”

Marshall, too, can rightly be regarded as a Scotland great – and over the next two seasons he has a chance to write another exciting chapter in his fabulous career.