Scotland kept their Euro 2020 hopes alive with a strong display against England as they came away with a huge point and clean sheet in their Group D clash at Wembley Stadium.

The changes that Steve Clarke made to the side which tasted defeat against the Czech Republic at Hampden Park paid dividends as Scotland provided a tough challenge to Gareth Southgate’s side. Ché Adams took to the stage really well in this crunch match as his raw pace and power constantly stretched England’s backline.

Having captain Andy Robertson and Kieran Tierney available was a huge boost for Clarke, and the pair added a much-needed composure in possession, as did young midfielder Billy Gilmour. Scotland did not shy away from the occasion and they played with a high intensity and were able to challenge and compete with an underwhelming England.

They played with desire and intensity, like they did in their first game, but they were once again left to rue their missed chances which could have propelled them into a great position to qualify to the knockout stages. Their play breaking through the thirds was at a much faster pace than England. The Scots have shown that they have what it takes to reach the knockout stages for the first time in their history, and they will be relishing the challenge against Croatia at Hampden Park to turn their dream into a reality. 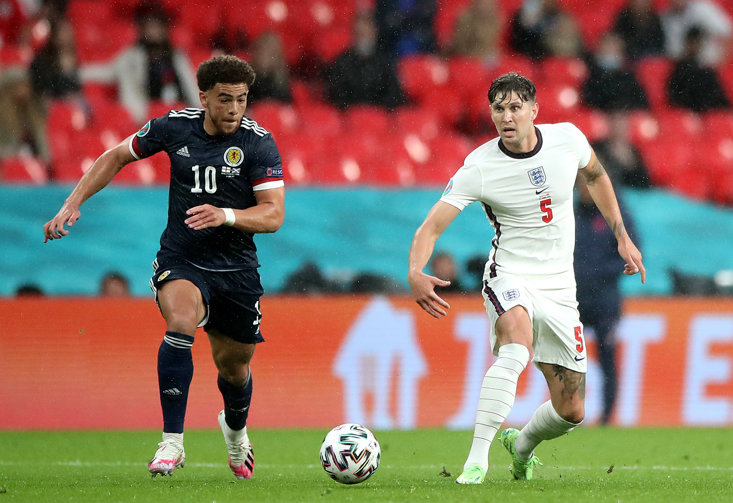 ADAMS' INCLUSION MADE A BIG DIFFERENCE TO SCOTLAND'S SHAPE

Scotland worked a very good chance early in the game as Adams was given the ball from the right and his effort was blocked, an early let off for England. Stephen O’Donnell nearly sent the Tartan Army into pandemonium as he hit an exquisite volley that was palmed away brilliantly by Jordan Pickford.

The Scots were resolute in defending their goal, and David Marshall was forced to parry a Mason Mount drive from outside the area early in the second half. Their shape was excellent and they frustrated England, who could not find any clear openings. Scott McTominay took to his makeshift defensive position really well as Harry Kane was kept quiet and not allowed to have an impact on the game.

The Tartan Army came close through Lyndon Dykes as his volleyed effort on goal was blocked on the line, causing a lot of nerves amongst England supporters. Adams had a great chance to score late on but he mishit his effort high and wide of the crossbar.

In any attempt they did manage to get forward, England were thwarted and dealt with by a resilient Scotland defence. It was a commendable display and no Scottish player shied away from their duty to keep their side in the game and the tournament. On this evidence, Scotland have every reason to believe they can beat Croatia on Tuesday and make that step forward into the unknown.