The sighs and groans synonymous with viewing the Scotland national team before Steve Clarke’s involvement are no longer fading memories of a troubled recent past.

Growing uneasiness is again lingering on the Hampden terraces due to a sharp increase in disjointed and unsatisfactory performances - and a troublesome June did little to allay fears that momentum is grinding to a halt.

For much of Clarke’s reign, progression has been continuous. His back-to-basics, no-thrills approach reversed a never-ending decline and engaged a fanbase desperate to rekindle a love affair with their national team. Qualification for Euro 2020 was the pinnacle, but it’s been stuffy and unconvincing during the current calendar year.

Fatigue after an arduous 10-month campaign could have been a factor behind Scotland’s tepid showings during an unusually congested June, but to ignore the glaring deficiencies evident in the Ukraine and the Republic of Ireland defeats would be negligent. Oleksandr Zinchenko was the tormentor-in-chief as the Blue and Yellow punished Scotland’s inadequacies in possession and exposed the glaring disconnect between centre-backs and wing-backs.

Scotland struggled to cope with the fluidity and slickness of Ukraine, and hopeful diagonal punts to an isolated Lyndon Dykes did little to upset the rhythm of their composed rivals. Such a direct approach only ensured the host’s midfield was on the periphery for the duration.

As the manager enters his fourth year in charge, developing a more refined style would appear to be the next stage of progression in the evolution of his tenure. Clarke is a pragmatist, though, and he is unlikely to deviate from a philosophy heavily influenced by Jose Mourinho, who he worked under at Chelsea for three years.

Being outplayed at home by a talented Ukrainian team can be explained - and it can even be justified considering the unusual circumstances. Losing heavily against a Republic of Ireland side bereft of star quality is not so easily dismissed. The Dublin debacle was a flashback to a bleaker time, and a lack of resilience in a derby clash ensured the travelling Tartan Army endured 90 torrid minutes. 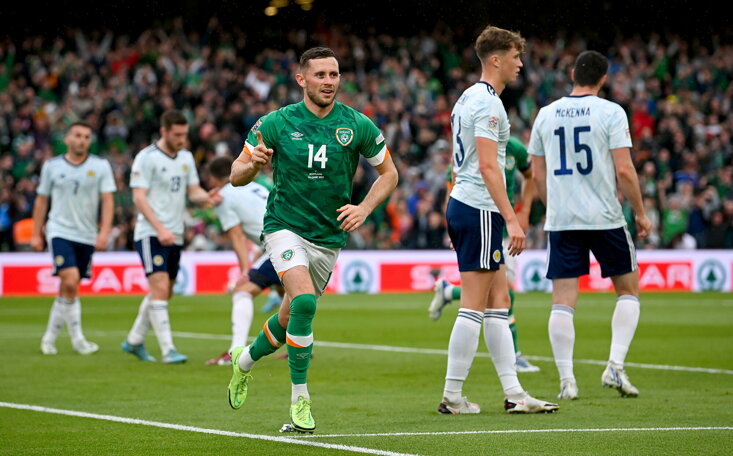 A 4-1 victory over 10-man Armenia followed, meaning a marathon season did not terminate on a hapless showing in the Irish capital. Scotland resides in second place in Nations League Group B1, and they still have an opportunity to earn promotion if they can topple Ireland and edge the head-to-head battle with Ukraine. It sounds straightforward, but the Scots have won just two of their six matches this year - and both victories were in encounters with lowly Armenia.

Kieran Tierney, who missed the summer backlog with an injury, is back in contention. His return will bring stability to a backline that has been creaking in his absence – and his under-lapping thrusts embellish Scotland’s approach work. Andy Robertson is unavailable, but Tierney is unlikely to be shunted into his preferred position, with Aaron Hickey the candidate expected to deputise for the captain.

There will be copious amounts of time for contemplation after the completion of Scotland’s triple-header. Non-World Cup involvement has left a gaping hole in the calendar, and Clarke will have the opportunity to reflect during the long wait before Euro 2024 qualifying commences next March.

Clarke’s immediate priority is to minimise Scotland’s defensive vulnerability and instil ideas in a team sorely lacking invention. His task tonight has, at least, been made easier by the unavailability of Zinchenko, but it will require more than agricultural football to appease the locals and unnerve a streetwise opponent.

It may be another fortnight of the increasingly derided UEFA Nations League ahead, yet neither Clarke nor Scotland can afford to let another international break slip into failure and despair.

Scotland are 13/8 to beat Ukraine with Betfred*