Football
News
Brennan Johnson and Brice Samba are the heroes as Forest reach Wembley for the first time since 1992
Joey Mills
22:42, 17 May 2022

Nottingham Forest will meet Huddersfield in the Championship Play-Off Final. The Tricky Trees lost 2-1 to Sheffield United on the night, taking the aggregate score of the tie to 3-3 over the two legs. Brice Samba was the hero in the shootout, saving three spot kicks to hand his side a 3-2 penalties win. Forest went within one game of a return to the Premier League in front of an atmospheric City Ground.

The Blades looked sharp from the start, playing with urgency of a team who needed a goal. Forest looked shaky in the early going, struggling to clear their lines from set pieces in particular.

Morgan Gibbs-White fashioned a phenomenal chance with a pinpoint pass for Iliman Ndiaye. The French forward fired his close-range shot too near to Brice Samba, who reacted well to beat it away. It was an early shot across the bow for Forest, and one that woke them up.

Against the run of play, the home side struck back. Sam Surridge did brilliantly in receiving a long ball and charging down the left flank. The forward crossed for strike partner Brennan Johnson, who buried the opportunity. The promising youngster became the first player to score in two legs of a Championship play-off semi-final since David Johnson, his father, in 2003. The elder Johnson’s goals came for Forest against none other than Sheffield United. The Blades went through on that occasion, but a 3-1 aggregate lead was enough to quell the feeling this piece of Johnson family history was a bad omen.

Tensions spilled over when Djed Spence and United manager Paul Heckingbottom clashed over how long the full-back was taking over his throw-ins. The majority of players on both sides piled in for a peacocking display of handbags at dawn. The situation was quickly diffused, with just the manager walking away with a yellow card.

Just a minute into the second half, and the game was blown wide open. Sander Berge showed some tidy feet in the Forest box, playing a sharp ball into Gibbs-White, who didn’t need a second invitation. The travelling Blades burst into booming song, as their dream of Wembley and a shot at the big time were revived anew.

Both teams attacked, with Forest not trying to hold on. With so much at stake, many of the forays forward lacked quality, with the game being more about atmosphere and tempo than end product and incisiveness. But the occasion was carried by the deafening noise of the City Ground crowd. 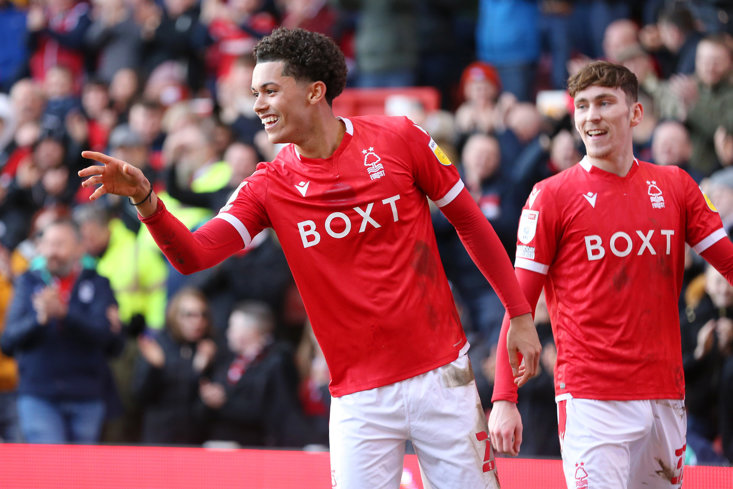 The quality in front of goal sharply improved when Sheffield United took the lead on the night, and drew the tie level on aggregate. Sam Baldock sat Jack Colback down and whipped a nice ball in for John Fleck to slot home and send the travelling support into raptures. In such an open game, this is the risk you run, and Forest were punished for not shutting up shop.

The magnificent Gibbs-White nearly turned the tide in the Blades’ favour with a brilliant deep cross for Ndiaye. The striker couldn’t quite direct it home, but it was a testament to the incisive brilliance Gibbs-White had shown all night.

There was to be no dramatic final contribution from any player, and this gripping tie went into extra-time. The action had been chaotically enthralling enough to warrant an extra thirty minutes of play, as these two energetic and hungry sides battled tooth and nail to join Huddersfield in the final.

As is often the case in extra time, there was little in the way of quality in the first half. Plenty of spirit, as there had been throughout the evening, but understandably the energy levels had dropped. Nobody wants to be the one to make a costly mistake at such a crucial stage, and while the Blades had the best of the period, they never quite cut loose and punished Forest.

Johnson battled his way through the massed ranks of United early in the second period, playing in Joe Lolley. The substitute did not get enough on the shot, and agonisingly Wes Foderingham kept it out. The keeper was called upon again a minute later, when a Johnson volley was well held. Forest certainly seemed to have responded to whatever Steve Cooper had told them during the mid-point in extra time.

United had one last stand themselves, with substitute Connor Hourihane flashing a great cross in for Gibbs-White. The magnificent forward could not quite get a boot to it, as the City Ground held its breath.

As penalties loomed, there was a late shout for one in open play. Jack Robinson went down in the area as Samba raced off his line. The referee gave a goal kick, choosing neither to award a spot kick nor punish a perceived dive. Instead, a penalty shootout would be needed to separate the sides.

Sky Sports Football
@SkyFootball
NO goals in extra-time means...👀
Penalties will decide who goes to Wembley! 😬
8
104

The very first penalty was saved, Samba getting across to palm away Oliver Norwood’s opening spot kick. After Johnson stuck his spot kick away, Samba once again pulled off a remarkable stop. Hourihane’s game of chicken failed, as Samba stood rooted to the spot and clotheslined his penalty onto the bar. Cafu powered his home, though Foderingham managed a touch.

Berge made it third time lucky for the Blades, as a Sheffield United player finally got the best of Samba from the spot. Steve Cook kept his side alive with a confident take. Ndiaye tucked his effort into the corner coolly. Lolley fired his effort over the bar, restoring an element of jeopardy to proceedings. Gibbs-White’s tame effort saw Samba make his third save, and cement himself in Forest folklore as a club hero. The crowd spilled onto the field, flares in hand, to celebrate wildly. After 23 years outside of the Premier League, and having never reached a Championship final, their club is now one game away from the top tier of English football.

For the first time since 1992, Nottingham Forest will play at Wembley. A gentleman by the name of Brian Clough was their manager that day. If you belief in the afterlife, you can be sure Ol’ Big ‘Ead is looking down and smiling after watching the club he led to two European Cup triumphs take another huge step towards the promised land.

x
Suggested Searches:
The Sportsman
Manchester United
Liverpool
Manchester City
Premier League
More
football
Newcastle United Finally Get Their Man As Sven Botman Signs
Newcastle United have confirmed the signing of Dutch centre-back Sven Botman from Lille for an undisclosed [ ... ]
football
Chelsea Close To £55M Deal For Leeds United's Raphinha
It’s the transfer window that just keeps giving!  Chelsea are now reportedly close to agreeing [ ... ]
football
Happy Birthday Kevin De Bruyne: The City Man Could Be In For...
Kevin De Bruyne turns 31 today and while he can expect no shortage of presents, he is a man with more [ ... ]
football
Forget Transfers, Here Are The Players That Could Improve Their...
The transfer window offers a twice-a-year opportunity for clubs to re-jig their squads, shift the deadwood [ ... ]
football
Success Or Failure? Every EPL Club's Most Expensive 2021-22...
The summer transfer window is well underway and fans across the Premier League are demanding that their [ ... ]
football
Netherlands Striker Miedema Feels Euro 2022 Can ''Put Women's...
Netherlands international Vivianne Miedema believes that this summer’s Euro 2022 in England is [ ... ]
football
LIVE Transfer News: Raphinha, Sven Botman & More
Good morning and welcome to The Sportsman's LIVE transfer blog, where we will have you covered for [ ... ]
football
Richarlison Over Antony: The Transfers Man United Need To Do...
With Manchester United’s summer business continuing to revolve around Frenkie de Jong, discussion [ ... ]
football
How Arsenal Can Get The Best Out Of Gabriel Jesus As £45m Deal...
Arsenal are closing in on the signing striker Gabriel Jesus from Manchester City in a deal [ ... ]
football
Four Number 17s Sadio Mane Will Look To Live Up To At Bayern...
Sadio Mane is embarking on a new adventure with Bayern Munich, having ended his six-year love affair [ ... ]
football
Arsenal Keeper Matt Turner's Journey To The Prem Has Had Many...
It’s all systems go at the Emirates Stadium with Arsenal acting swiftly to bolster their squad [ ... ]
football
£170M! The Long-Term Cost Of Chelsea's Horror Romelu Lukaku...
Romelu Lukaku’s loan return to Inter Milan is imminent and just one year after Chelsea paid £97.5m [ ... ]
football
The Third Best Stadium In Glasgow, Hampden Park Desperately...
From the 10-goal thriller between Real Madrid and Eintracht Frankfurt in the 1960 European cup final [ ... ]
football
Premier League Meets Primeira Liga: Why English Clubs Are Raiding...
As Premier League clubs frantically try to assemble squads that will improve their lot this season, [ ... ]
football
Transfer News: Gabriel Jesus To Complete Arsenal Switch
The latest news from the football world sees Manchester City and Arsenal linking up once again, this [ ... ]
football
Burnley Manager Vincent Kompany Talks Transition, Transfers...
Vincent Kompany was a fine footballer – but can he cut the mustard as a manager? The former [ ... ]
football
Clowes’ Bid Accepted For Derby County As Rosenior Is Named Interim...
It’s been a torrid season for Derby County fans, ending in relegation to League One, but [ ... ]
football
Man United, Chelsea And Newcastle Linked With Neymar Ahead Of...
Following reports that Neymar is considering leaving PSG this summer, it is now being claimed that only [ ... ]
football
LIVE Transfer News: Chelsea Chasing Sterling & De Ligt
The final day before the Premier League clubs begin their pre-season training and there's [ ... ]
football
European Champions On 10 Days Notice: 30 Years On From Denmark’s...
“Our sponsors were not prepared for us to go, so what we had was the Under-21s kit. When you look [ ... ]
football
QPR Boss Michael Beale On Carlo Ancelotti, Steven Gerrard And...
Michael Beale began his coaching career at Bromley Church Hall. With coats and bags pushed to the side [ ... ]
football
Andy Carroll To Club Brugge And Football's Weirdest Transfers
Andy Carroll is reportedly in talks with Club Brugge over a move that would see him potentially play [ ... ]
football
Cristiano Ronaldo Next Club Odds If He Leaves Manchester United...
Even at the age of 37, Cristiano Ronaldo remains one of the most dangerous footballers on the planet. [ ... ]
football
Don't Sleep On Argentina & Brazil: Europe Is Missing A South...
We’ve always had the European qualifiers, the World Cup preliminaries and the Euro finals tournaments [ ... ]
football
Transfer News: Liverpool Want £60m+ For Mo Salah
Mo Salah could follow Sadio Mane out of Anfield as Liverpool consider the sale of the Egyptian [ ... ]
football
Ronaldo Redeemed: When Il Fenomeno Cemented His Legacy At The...
It was a sight as familiar as the gulping down of glasses of Pastis or the packed sands and waters of [ ... ]
football
Manchester United Say Goodbye To Their Most Divisive Player...
Paul Pogba has taken his ‘Pogmentary’ and gone home. The midfielder will return to Juventus [ ... ]
football
Enthralling England's Electric Attack Blows The Netherlands...
Has an entire England squad ever been summed up in 54 seconds before? In the second half of the Lionesses [ ... ]
football
Manchester City Agree £42M Deal To Sign Leeds United's Kalvin...
Pep Guardiola’s Premier League champions Manchester City have made a significant breakthrough [ ... ]
football
Wayne Rooney Leaves Derby County After Turbulent Summer
Derby County manager Wayne Rooney has announced he is leaving the club after a summer of turmoil in [ ... ]