The Crucible Theatre once more echoed to the sound of a huge roar from a sell-out crowd on Monday, and that proved a fitting farewell for outgoing World Snooker supremo Barry Hearn.

The Betfred World Championship final in Sheffield featured the first capacity audience for any sporting event since the Cheltenham Gold Cup in March 2020.

Propelling Anthony Joshua to the top of the heavyweight boxing tree might seem a hard achievement to top for Hearn Senior, now handing over the reins of his family empire to son Eddie.

There is something about snooker and this iconic venue though, that will always be special for a man that bought a chain of clubs in Essex in 1974, and then saw a gangly red-headed youth wander in two years later in the Sliding Doors moment that would change both his and Steve Davis’ lives.

But for all Davis’s six world titles and the many other successes across a myriad of sports, Hearn has been blown away by the herculean efforts of his team to cope with Covid, get players playing, and give fans something to watch on TV.

And after being selected as one of the government’s key test pilot events, for which the data and evidence gathered could pave the way to eased restrictions and return of crowds for all indoor sport and theatre, shows, comedy and music, the whole experiment has been a source of immense pride.

The sell-out crowd for the final day were rewarded with a contest worthy of the occasion between two of the game’s best and most decorated players, and finest ambassadors.

The fans, or at least the vast majority, were not able to attend the World Championship last year, with even the limited crowd allowed suspended on the very first day as the pandemic figures started heading the wrong way and the government intervened.

They returned just for the final between Ronnie O’Sullivan and Kyren Wilson, again at only around one third of the usual 980 capacity. And since then, that has been it.

The loyal devotees of the game that normally travel all over the UK have been forced to sit at home and follow tournaments on either the BBC, ITV4 or Eurosport while the players – with a couple of tournament exceptions – spent almost their entire season in Milton Keynes.

But they queued in the drizzle in Tudor Square as they meandered their way slowly down through the various checkpoints to gain entry to the Crucible. 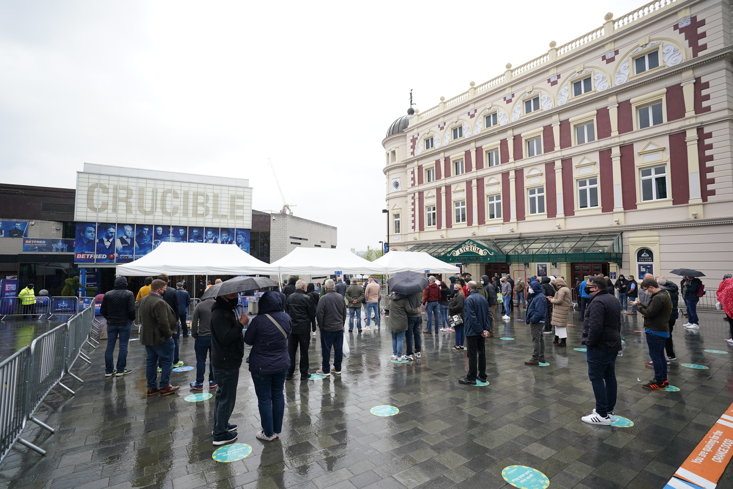 However, after a season behind closed doors and the hurdles overcome to do Covid tests in their hometown 24 hours before getting to Sheffield, finding accommodation with hotels off limits to the general public and committing to post-event PCR tests to check for transmission, a bit of rain was not going to put them off.

There was social distancing in the foyers but not in the arena – managed every step of the way. Scientists and behavioural experts have descended on the theatre these last 17 days.

Lord Lloyd Webber recently had lunch with Hearn, anxious to hear how the pioneering tournament might pave the way to getting his shows back on West End stages and wishing his outgoing counterpart the best of luck.

And the famous Crucible roar, a prolonged explosion of noise and a standing ovation as Mark Selby and Shaun Murphy walked out onto their stage yesterday afternoon, offered a reminder of what has been missing in snooker, sport, and the wider world. They didn't need much whipping up by MC Rob Walker. 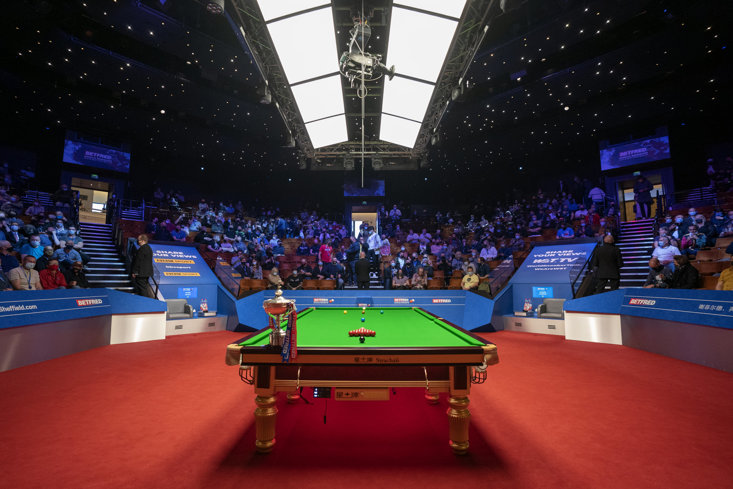 The Culture Secretary Oliver Dowden, at the venue last week, knows exactly how important the data and evidence could prove from snooker’s blue-riband tournament for a very wide range of sporting and arts venues.

“Any restrictions will be in for a short period of time. We are having a review of Covid certificates, whether that is to prove you have had the vaccination or a tests before.

“It may be and we have to look at the public health situation that in some very high risk environments there needs to be some of that. We haven’t made final decisions on it.

“If we don’t have to do that, and we can open these events up, with full audience, without those restrictions, we won’t apply them. If we do have to apply them we will do so in a short a period as possible.”