Football
News
As the club looks set for a summer-long circus, The Sportsman looks at how United can do things differently
Joey Mills
13:25, 17 Jan 2022

Manchester United are reportedly keeping their powder dry during this January transfer window, in hopes of making a sustained push to sign a high-profile midfielder in the summer. The familiar names of Jude Bellingham and Declan Rice are being linked with a move to Old Trafford. This in spite of the fact United sit seventh in the table, a 2-2 at Aston Villa when they had led 2-0 being the latest symptom of an unraveling season. Their crumbling midfield has been a major contributing factor to the club’s downfall, yet a month-long opportunity to strengthen has been cast aside for another box office transfer pursuit this summer.

Long-time followers of the transfer market will know how these pursuits usually go for Manchester United in the Glazer era. They are public and noisy. While other clubs conduct their transfer business like a stealth mission, the Red Devils tend to land a helicopter on the roof and throw flashbangs through the windows.

The club boasts about their social media engagements in their quarterly reports, and the rampant rumours are a keenly-stoked fire. United have even taken the unusual step of hosting a transfer rumours page on their own club website, to try and harvest clicks from fans desperate for a sliver of news. The circus is the endgame it seems, and a transfer that doesn’t happen is nearly as valuable to United’s overall brand philosophy as one that does. This sort of method might make for a nice looking spreadsheet, but it leads to decay on the pitch.

Decay is exactly where the Old Trafford club finds themselves. It turns out that while the time was right for Ole Gunnar Solskjaer to depart, he was far from the most severe problem facing the club. The squad is wildly unbalanced, with too many players they either can’t shift or don’t want to. High-reputation talent like Dean Henderson, Anthony Martial and Donny van de Beek are keen to move on but are being held almost against their will, while there is only a whisper of any business coming the other way.

Action is needed right away if Ralf Rangnick is to be given a fair chance to right the ship. The need for a new central midfielder is nothing new, not a passing whim from a temporary coach. It is a position United fans were begging the club to address in the summer, where instead the Glazers opted for the click-generating acquisition of Cristiano Ronaldo. Obviously the return of a club legend will keep the club shop tills ringing more than an upgrade on Scott McTominay or Fred. The problem stretches back even further than the summer of 2021 though. 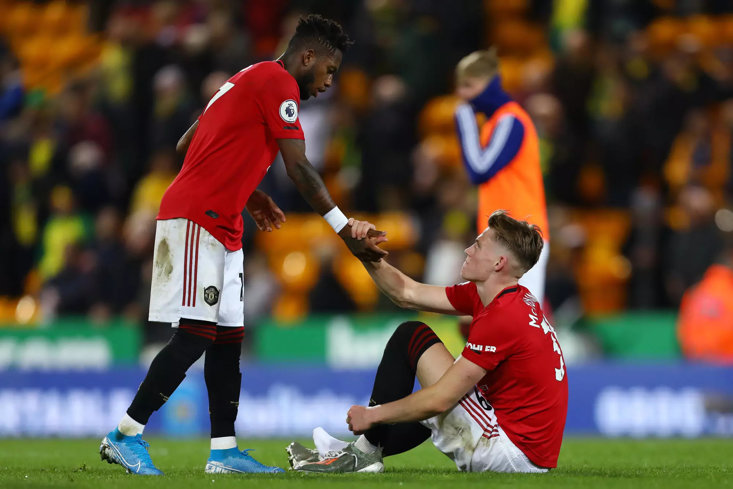 Fred and mctominay have both struggled for consistency in midfield

The club have been without a consistent performer in deep midfield since Michael Carrick’s 2018 retirement. Ander Herrera left the following year, another popular club figure who could operate in that area of the pitch. Since these damaging departures, Fred has struggled to find his footing while McTominay looks capable but unsure of his best position. A former striker in his youth, the 25-year-old has looked better suited as a Marouane Fellaini-style marauder who gets into the box than a holding midfield string-puller.

It should be pointed out that Declan Rice and Jude Bellingham would both improve this team, as they would almost any team. But both would represent another Jadon Sancho-type saga set to swallow a whole summer. One need only look at the example of Sancho, who was the failed subject of one of these drawn-out transfer epics in the summer of 2020, to know how damaging such an approach can be. Deadline day that year brought the smart acquisition of Edinson Cavani, but the signings of Amad Diallo and Facundo Pellistri seem like a smokescreen in retrospect. Both are wide players, and were revealed as first team signings on the day. Pellistri has yet to play a game for the first team, while Amad has played nine times in two years. Both are still under 21, and clearly have potential, but the fact they were unveiled to fanfare rather than the usual low-key treatment given to development squad signings was a symptom of the club’s failure to land Sancho.

The frustration for United fans is the fact that there is another way. While the Glazers and new United CEO Richard Arnold prepare to be the talk of the town for another summer, there are options available right now who could revive the club’s season. Amadou Haidara is reportedly on Rangnick’s list of potential signings. The pair worked together during the German’s time at the head of the Red Bull football empire, with Haidara having played for both RB Leipzig and RB Salzburg. Red Devils supporters will remember him scoring against them in a 3-2 defeat to Leipzig in 2020.

Haidara would not be a box office signing in the same way as Rice and Bellingham, but he is capable. At 23, he has his best years ahead of him and he has an understanding with a manager who has struggled to install his blueprint. Most importantly, he is available this month. If Manchester United were to finish outside the Premier League places, barring a fanciful winning of the Champions League, they might struggle to attract players of the profile of Rice and Bellingham. But getting a player through the door who would immediately improve this team could have a positive impact on more elaborate future transfer plans. You won’t prise away Declan Rice in January, but you can bring Amadou Haidara in and hope he can help you make the club more attractive long-term.

The “fetch me a superstar” model has not worked, that much is clear. For every Zlatan Ibrahimovic there has been a Bastian Schweinsteiger. For every Edinson Cavani, an Alexis Sanchez. Transfers that blow up social media tend to blow up in United’s face on the pitch. A fresh approach is long overdue, one that looks to build prestige rather than buying it. A more functional United on the field makes the club a more attractive commercial proposition off it. It remains to be seen whether the Glazers have the long-term vision needed to take such an approach.