This summer’s list of free agents in European football contains some interesting names. While the likes of Adrian Rabiot and Diego Godin have been snapped up by Juventus and Inter respectively, there are two Italian veterans that would surely be on the list of a fair few clubs.

Having moved on from Juventus last summer following an incredible 17 years in Turin, Gianluigi Buffon is at the end of his one year deal with Paris Saint Germain. At the age of 41, it’s clear that this incredible goalkeeper can no longer hold down the number one spot at a top side, however there are surely many teams who would be willing to prolong his career.

Those with a young stopper also on the books would certainly benefit from his wealth of experience, having won every domestic trophy possible alongside a World Cup win with Italy in 2006.

Reports in Italy insist that Marco Bielsa is keen to bring Buffon to Leeds for next season, however the Yorkshire Evening Post were quick to extinguish such claims, citing high wage demands as the reason why this move may not happen.

Porto are another option for the Italian ‘keeper, as they are said to be looking to replace fellow veteran Iker Cassilas, who is expected to retire after recently suffering from a heart attack. What’s clear is that Buffon still feels keen to play football, and whoever snaps him up will benefit from his presence and vast experience.

When Buffon won the World Cup with Italy, midfielder Daniele De Rossi was a relative youngster, named in the squad by Marcello Lippi at just 22 years old. Yet he was instrumental during the final versus France, scoring a penalty in the shootout that eventually saw the Azzurri lift the trophy on that famous night at the Olympiastadion in Berlin.

The combative yet hugely skilful player went on to make a total of 117 appearances for his country, in addition to 616 appearances for AS Roma since his debut in 2001. Now at the age of 35, he is no longer able to make the starting lineup every week, and featured just 18 times in the league for Roma last term.

However, it was clear that he was still able to make a large contribution to his team when he did feature, but the club were clearly not of the same opinion. Just before the final game of the 2018/19 campaign, the Captain was informed that he would not be given a new contract, a move that angered supporters of the capital club.

“Now, the greatest gift you could give me would be to set aside the anger and all together unite to blow the wind in our sails, to push forward the only thing that we care about, the thing that comes first and foremost ahead of everything: Roma,” De Rossi wrote in an open letter to fans ahead of his final game. “Nobody will ever love you more than me. Arrivederci.”

His exit undoubtedly still hurts for De Rossi and those who have cheered him on during the last 17 years, but his exit could work in favour of another side in Serie A.

At one time it was unthinkable that this player could pull on any other shirt than Roma, but the midfielder understandably wants to prolong his playing career, and he is clearly capable of doing so. Reports initially suggested he could move to either Boca Juniors or La Galaxy in MLS, but now it seems like his family would rather stay in Italy.

Both AC Milan and Fiorentina are said to be interested in snapping up this free agent, and it will be very interesting to see where his career leads him from this point onwards.

It seems we will see more and more examples of players like Buffon and De Rossi leaving long-term clubs in order to prolong their playing careers, especially with fitness levels constantly improving and allowing veterans to take to the field for just a few years more. 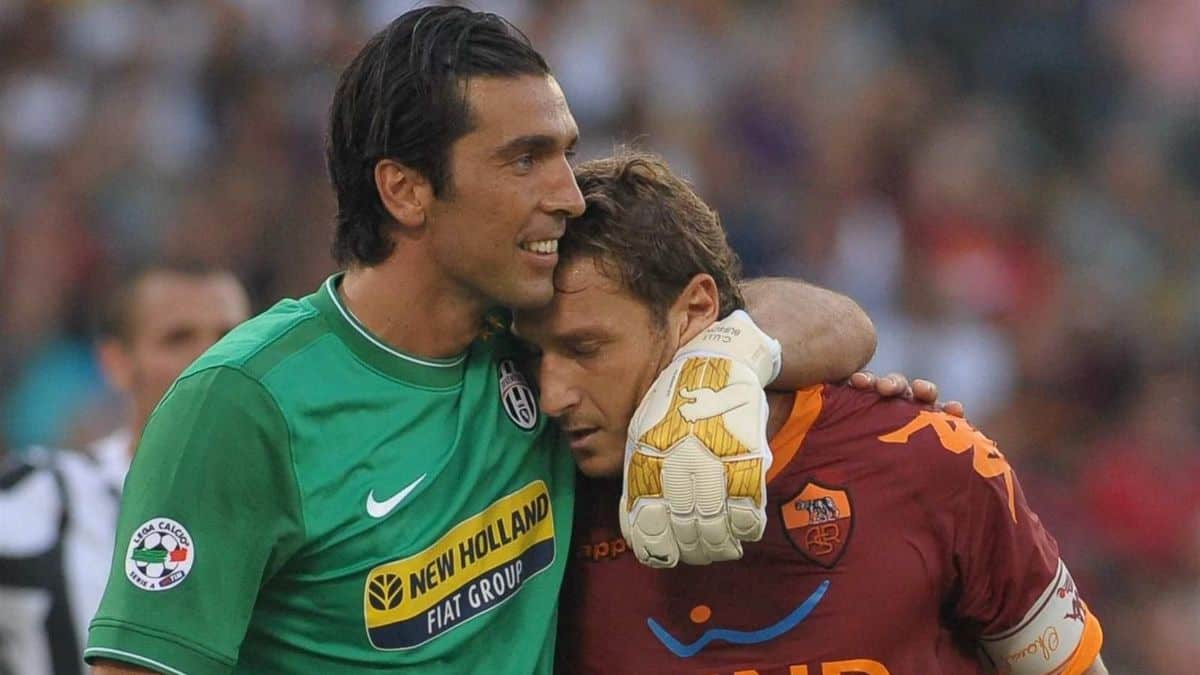 20
175
More
football
Thiago, Kalvin Phillips And The Premier League ‘Quarterbacks’...
Thanks for reaching out. You do the math. My bad. Americanisms, you gotta love ‘em. We’ve [ ... ]
football
Wayne Barton's Book On David Beckham Highlights Golden Balls'...
When historians look back at the sports scene at the turn of the millennium, there will most certainly [ ... ]
football
Rosé For Rodriguez, A Bollocking For Bilic, Five Stories You...
Managers can’t manage masks, fans are finding new ways to hail their heroes, and Jurgen Klopp [ ... ]
football
The Covid Defying Smart Helmet That Could Help Unite Football...
After the longest season in history, a mercifully short reprieve for players to catch their breath has [ ... ]
football
Get An Edge On Your Rivals This Season With The Fantasy Premier...
What are you this year? ‘Lallanas in Pyjamas’? ‘Murder on Zidane's Floor’? [ ... ]
football
Neymar's Handbags, Shy Guy Jose, And Other Football Stories...
Just like that, we’re back in the room. There’s new rules (on and off the pitch), and renewed [ ... ]
football
Celebrating The Return Of The Premier League With Its Best Ever...
After the shortest pre-season on record, even if it has felt to some of us like the longest ever, Premier [ ... ]
football
Lionel Messi Teams Up With Budweiser To Inspire Tomorrow's Footballing...
Lionel Messi, for all you do, this Bud’s for you. We’ve got to admit, it’s got a certain [ ... ]
football
From 007 to 46 Million Followers, Ten Facts You Never Knew About...
Everton finally announced the signing of James Rodriguez on Monday evening, after the Colombian superstar [ ... ]
football
The New Liverpool Book With A Groundbreaking View Of The Shankly...
September should always hold a special place in the hearts and minds of Liverpool Football Club and [ ... ]
football
The Questions We Want Answering After Watching All Or Nothing:...
“You have to be a bunch of bastards!” Annnd with that, we’re hooked. The last day [ ... ]
football
Football History Comes To Life With The Guardian’s Forgotten...
For much of 2020, the general consensus amongst the sporting community has seemingly been the desire [ ... ]
football
Book Review - Close Quarters: An Extraordinary Season On The...
He has been called the luckiest journalist in the world. When award-winning sportswriter Neil Harman [ ... ]
football
Work Out Like A Chelsea Player With The Most Advanced Football...
It claims to be the most advanced football training experience ever - imagine being trained by world-class [ ... ]
football
Blue Moon, Bubbles & Delilah - How Football Clubs Got Their...
Liverpool and Celtic fans both enjoy spine-tingling versions of ‘You’ll Never Walk Alone’ [ ... ]
football
The Lionesses Who Helped Lead The Charge In Lyon's Coupe De...
For the second time in less than a fortnight, Olympique Lyonnais and Paris Saint-Germain faced off in [ ... ]
football
Five Premier League New Boys That Are Set To Take Next Season...
A swift summer transfer window is on the cards, with just 48 days between Premier League seasons due [ ... ]
football
Bobby Robson And The Most Glittering Chapter In Ipswich Town’s...
Few in Ipswich could have predicted what was to come when Bobby Robson replaced Bill McGarry at the [ ... ]
football
How Tearing Down The Twin Towers Destroyed The Magic Of Wembley
On July 26, 1998, plans for a new Wembley were revealed to the world, promising a national stadium [ ... ]
football
Here's To The 2019/20 Premier League Season: Five Moments That...
It all began on August 9, 2019. 353 days later, a fortnight shy of a full entire year, the 28th Premier [ ... ]
football
Why Figo To Madrid Is Still Football's Most Controversial Transfer...
We’ve had Neymar, Sol Campbell and Carlos Tevez but on this day in 2000, Luis Figo completed the [ ... ]
football
Remembering Laurie Cunningham: The Football Pioneer Whose Legacy...
In 2016 the English Heritage scheme erected a blue plaque in Stroud Green, North London to celebrate [ ... ]
football
Book Review - King Eric: Portrait Of The Artist Who Changed...
Leeds. Irwin. £1million. Title. Double. Palace. Kick. Ban. Seagulls. Return. Liverpool. Double. [ ... ]
football
Replacing Rapinoe And Morgan? The Ladies Who Can Light Up The...
Write off 2020. The best thing about it is remembering how good 2019 actually was. One of the undeniable [ ... ]
football
Wembley Woe: When England Lost To Germany At Euro ‘96
In the summer of 1990 England tasted their first ever penalty shootout heartbreak when they went out [ ... ]
football
Get Ready For A Nostalgia-Fest With Italia '90 Podcast Vincerà!
Hosted by Mark Godfrey and running from June 8th to July 8th, Vincerà! is a 24-part podcast series [ ... ]
football
Harry's Heroes, Vinnie Jones And Revenge At The Battle Of San...
When Vinnie Jones started crunching San Marino players left, right and centre, it was clear the friendly [ ... ]
football
Prodigal Talent Of The German Game Is Turning RB Leipzig Into...
This article first appeared in The Sportsman on 07/12/19 What were you doing at the age of 28? If it [ ... ]
football
''I Was Really Wasted'': When Jurgen Klopp Woke Up Hungover...
This article first appeared in The Sportsman on 05/09/19 Anyone watching the Amazon Prime documentary [ ... ]
football
Book Review - Yer Joking Aren't Ya?: The Story Of Middlesbrough's...
In 1997, Middlesbrough Football Club reached the finals of both the League and FA Cup, had the might [ ... ]